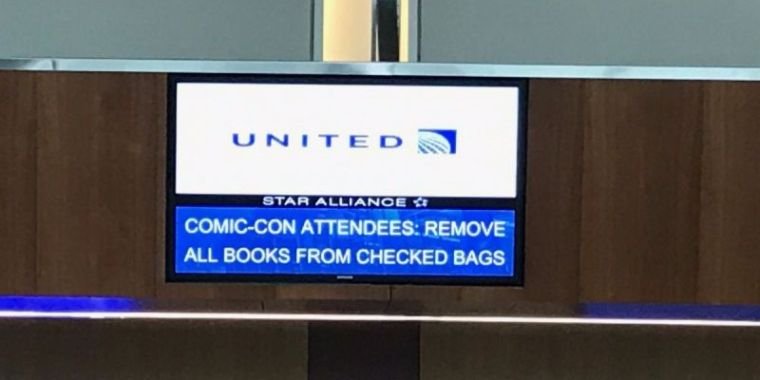 Don’t worry Comic-Con fans, you don’t have to take your comic books out of your checked luggage, despite what a Sunday photo on Twitter might suggest.

The dust-up started after a person named Adi Chappo tweeted the above, tagged United Airlines, who responded on Twitter:

The comic book checking restriction applies to all airlines flying out of San Diego this weekend and has been enacted by the TSA. ^MD

But by Monday, the Transportation Security Administration said no such restriction existed.

Good afternoon. Please note that there are no TSA restrictions on checking comic books or other types of books. https://t.co/Nu00IvcZSc

Lorie Dankers, a TSA spokeswoman, told Ars Monday morning she was baffled at how United could get this policy wrong. “I don’t know how United went about their business and misphrased a TSA policy,” she said. “I can say that TSA has advised in the past that if people bring several of the same type of item, it can alert checked baggage, but there is no ban on taking things that don’t pose a security risk. In this case, comic books pose no security threat and we encourage travelers to take them with them if they wish.”

Dankers referred to a 2016 blog post (and also a more recent post) in which he noted that stacks of comics “often [cause] alarms leading to baggage searches, which can significantly delay the screening process, leading to delays and baggage potentially missing their flight.” But she clarified that this was a recommendation, not a requirement.

When Ars Dankers asked what her favorite comic book was, she said she “had to go with” Wonder Woman.”

Erin Benson, a United spokeswoman, emailed Ars a statement about the incident.

“While TSA recommends customers keep their comic books in their carry-on luggage, there are no restrictions on packing them in checked luggage,” she wrote. “We have misunderstood TSA’s instructions and regret any inconvenience this has caused our customers.”

Ars is still waiting to hear what her favorite comic is.