Trump’s First 100 Days: The Good, The Bad, And The Ugly For Technology And Science | Techilink 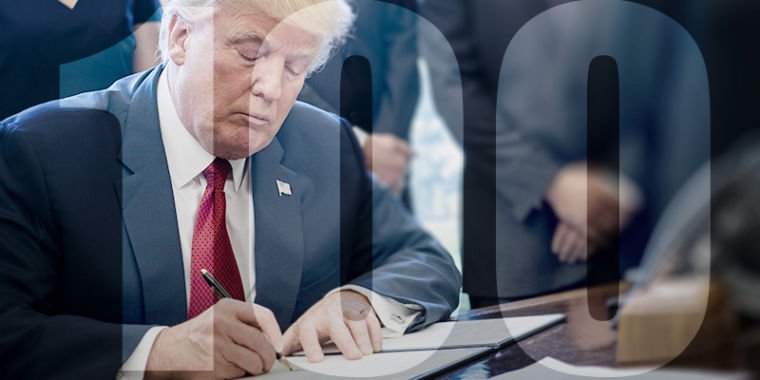 The first 100 days of President Donald Trump’s rule come to an end on Saturday. Anyway, this presidential honeymoon was a mixed bag. The 45th president’s greatest achievement was the confirmation to the Supreme Court of Neil Gorsuch. His biggest defeat was the failure to fulfill a campaign promise to get Congress to repeal Obamacare – officially known as the Affordable Care Act. “We couldn’t quite get there. We are just a very small number of votes short of getting our bill passed,” the president said. And throughout it all, the first three months of administration, which ended with the lowest public approval rating for a new president at this stage, remained clouded by political turmoil, largely as the FBI investigates whether Trump’s presidential campaign colluded with the Russian government.

The current administration will claim several awards that fall somewhere between the president’s Supreme Court victory and his defeat in health care reform. These successes – or setbacks, depending on your political affiliations – vary when it comes to policy areas. The FCC presidential nomination has pushed net neutrality to the chopping block. Online privacy also took a hit after Trump signed legislation allowing home internet and mobile broadband providers to sell or share web browsing histories without consumers’ consent. Trump also signed legislation designed to limit federal funding for Planned Parenthood and other groups that offer abortions. The president ordered the end of President Barack Obama’s Clean Power Plan and reversed the Obama administration’s decision to require automakers to increase fuel economy.

“If the standards were threatening highways, then common sense changes could and should have been made,” Trump said of the mileage standards. And speaking of jobs, Trump notably also signed an executive order requiring a major overhaul of the H-1B visa program. The program enables tens of thousands of foreign workers to work in the US tech sector each year.

So despite his unusual political rise, Trump’s first impressions follow the familiar path of his many predecessors. This 100-day period, with a few notable OPSEC failures, was a mix of political victories and defeats, popular and unpopular policies and appointments. When it comes to topics that matter most around Ars Technica, there’s plenty to discuss.

What a difference a few months make. Trump infamously said to rival Hillary Clinton during his presidential campaign, “I love WikiLeaks.” That’s because the site dumped all kinds of documents about the Democratic National Committee, including documents about the party’s campaign strategy.

But more recently, Trump’s CIA Director Michael Pompeo threatened the site where documents were spilled. He called WikiLeaks a “non-state hostile intelligence agency often supported by state actors such as Russia”. That comment was in response to WikiLeaks’ recent release of all types of CIA spy documents, including leaks about the agency’s hacking tools.

The administration, believe it or not, got some credit from the Electronic Frontier Foundation in the early days. Recently, the EFF praised the FBI for getting a single warrant in Alaska to hack into thousands of computers in an attempt to free them from the global botnet, Kelihos. To win the injunction, authorities first invoked Rule 41, a section of the Federal Rules of Criminal Procedure that was revised in December. Many human rights organizations feared that the government, with the new hacking authority, would abuse that power. But for now, those fears have been allayed.

On the other end of the privacy spectrum, however, the Trump administration has demanded that Twitter reveal who is in control @ALT_uscis dealing with criticism of the president’s immigration policy. The handle, now with 154,000 followers, debuted in the immediate wake of Trump’s signing of his first immigration executive order. Authorities believe this Twitter feed is controlled by a government employee or employees of the US Citizenship and Immigration Services (USCIS), a division of the Department of Homeland Security. Authorities suspect the account is one of several so-called new “alt” Twitter feeds run by federal employees critical of the government. After Twitter protested and published the demands of the Customs and Border Protection Service, the administration collapsed (pdf). But that privacy dispute isn’t over yet: The DHS inspector general is investigating whether the government abused its power to file the claim.

Of course, no online-related political topic has been as closely scrutinized in 2017 as net neutrality. Shortly after his inauguration, Trump named Republican Ajit Pai chairman of the Federal Communications Commission. Pai moved quickly to reverse the agenda of his predecessor, Democrat Tom Wheeler, by overturning some of Wheeler’s regulatory decisions and weakening others.

Pai’s FCC has upended an expansion of broadband subsidies for the poor, a plan to save customers money on TV set-top boxes and inmate calling rules that cap calling rates within states. In addition, Pai has filed a net neutrality investigation into data cap waiver fees charged by AT&T and Verizon Wireless, rules requiring ISPs to disclose hidden charges and data caps, and data security rules requiring ISPs to protect customer information from theft and data breaches. .

But perhaps his biggest move came Wednesday, when Pai announced he intended to reverse the FCC’s earlier decision to enforce net neutrality rules and classify ISPs as regular carriers. On the chopping block is an FCC net neutrality order passed in 2015 under Wheeler’s leadership that prohibits internet service providers from blocking or throttling traffic or prioritizing web services in exchange for payment. The order also established a grievance procedure to prevent “unfair” or “unreasonable” pricing and practices. The threat of complaints to the FCC helped settle several disputes between ISPs and other network operators over network interconnection payments, improving the quality of Internet service for many subscribers. Comcast and other ISPs promptly celebrated the FCC chief’s announcement.

All in all, the turnaround of Wheeler’s FCC administration marks a major shift. Wheeler had argued that the FCC could promote broadband rollout without sacrificing consumer protection. With Pai at the helm, ISPs are clearly emerging as the big winners.