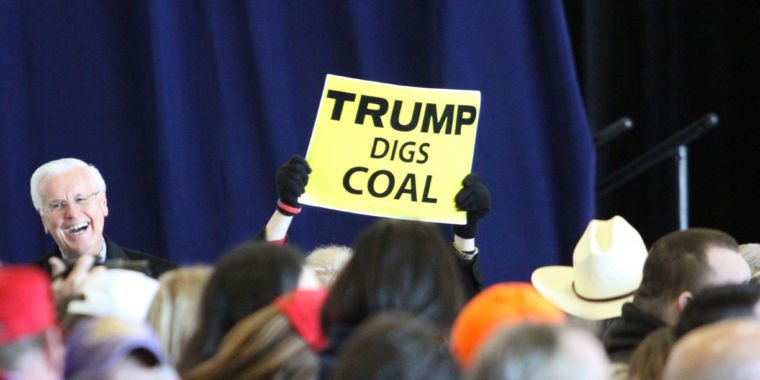 After weeks of rumors and delays, President Trump on Tuesday signed an executive order on climate policy at the headquarters of the Environmental Protection Agency — an agency that tried to hit the Trump administration with a $247 million cut for the current according to Politico, and is targeting a 31 percent cut for next year. The order includes a number of actions to overturn Obama-era decisions related to greenhouse gas emissions that have already warmed the world’s climate by about 1 degree Celsius (1.8 degrees Fahrenheit) since the late 1800s.

As part of the announcement, Secretary of Energy Rick Perry said, “America’s leadership, the leadership of the president, on how we achieve energy independence while improving our environment in this country and abroad is more defined by the actions these president is undertaking than ever before. time.”

The main goal of the effort is the EPA’s Clean Power Plan rule. The EPA finalized the rule last August, but a court challenge by a number of Republican attorneys general (including new EPA administrator Scott Pruitt) has left the rule in legal limbo. The goal of the Clean Power Plan was to reduce CO22 emissions from power plants to 32 percent below 2005 levels by 2030. The rule set reduction targets that each state had to meet, but left it to states to decide how to achieve them. It would have been extremely difficult for coal plants to meet the new standards, and less coal burning would also lead to a reduction in other pollutants.

In an interview on ABC’s “This Week” on Sunday, EPA Administrator Scott Pruitt teased the order’s announcement, saying it would “address the previous administration’s efforts to kill jobs in this country through the Clean Power Plan. ” But the EPA’s official evaluation of the rule estimated that by 2030 it would prevent about 3,600 premature deaths each year, along with 90,000 asthma attacks and 1,700 heart attacks each year. The EPA calculated a net economic benefit of $26 to $45 billion dollars by 2030 between climate and health improvements.

The executive order directs the EPA to withdraw the Clean Power Plan and return it to the drawing board. That will take time, and the agency will have to try to scientifically justify a new set of regulations in its place.

Some form of regulation is still required because the U.S. Supreme Court ruled that the EPA had a legal obligation to regulate greenhouse gases under the Clean Air Act as long as the agency determined that greenhouse gas emissions posed a threat to “public health and well-being.” In 2009, the Agency concluded that it had – a major decision known as a “threat finding”. As a result, the EPA is now legally required to issue some sort of regulation, such as the Clean Power Plan.

Politico reported that the White House was considering withdrawing the hazard finding as part of this executive order. Pruitt successfully resisted that idea because it would be so difficult to do so in a way that would survive litigation. Either way, legal challenges to the EPA’s review of the Clean Power Plan are a certainty. In the meantime, a number of older coal-fired power stations that would probably have been retired can continue to operate.

The Department of the Interior is being instructed to rewrite restrictions on fracking oil and gas on federal land to make the restrictions more producer-friendly. Previous rules tightened requirements for construction of storage tanks and seals around wells, required disclosure of all chemicals used in the fracking process, and limited emissions from natural gas leakage.

Perhaps the most shocking part of the order is that federal agencies will be told to stop considering climate change when assessing infrastructure projects.

In addition, the federal government is being directed to stop using EPA-developed “social carbon cost” calculations to determine the impact of greenhouse gas emissions when making policy decisions.

Perhaps the most shocking part of the order is that federal agencies will be told to no longer consider climate change when assessing infrastructure projects. That includes ignoring things like sea level rise and increasing flash floods, which can easily destroy infrastructure or make it irrelevant.

In particular, the executive order lacks any mention of the 2015 international Paris Agreement, in which countries pledged to reduce greenhouse gas emissions. As President Trump ranted against the campaign trail agreement, there has been reported debate within the administration about the diplomatic risks of a formal withdrawal.

In particular, Trump’s daughter Ivanka, son-in-law Jared Kushner and Secretary of State Rex Tillerson have opposed such a move. At the latest Heartland Institute conference promoting the rejection of climate science, the aide leading the Trump administration’s EPA transition, Myron Ebell, expressed disappointment by calling former ExxonMobil CEO Tillerson a “swamp creature” because he failed to achieve a full withdrawal from the Paris Agreement.

Instead of backing down, the Trump administration can simply ignore the United States’ commitment since it was not legally binding. Given the new executive order and other recent actions, the US is already unlikely to meet its target of cutting emissions 26 to 28 percent below 2005 levels by 2025.

The executive order is being pitched as an effort to revive the declining coal mining industry and increase “energy independence”. However, manufacturing jobs are threatened by much more than pollution controls. Low natural gas prices due to the significant increase in production in the US (thanks to fracking) have made gas plants much more competitive, and automation has further reduced the number of workers needed in the remaining coal mines. And coal plants shut down by stricter pollution standards, such as the Clean Power Plan, would have been replaced not only by natural gas, but also by wind and solar power — renewable, domestic sources that the Trump administration says don’t count toward “energy independence.” ‘.

Referring to coal mine closures in remarks before the signing of the executive order, Vice President Mike Pence said, “Those days are over because the war on coal is over.” President Trump echoed that sentiment in his own speech, adding, “I’m getting clean coal. Really clean coal.” How coal would be cleaned was not specified.

And in fact, there was some acknowledgment that any metaphorical war was the least of coal’s worries. On the signing stage was Robert Murray, the CEO of Murray Energy, a major coal mining company. In an interview with The protector yesterday Murray himself said he had told President Trump that manufacturing jobs are unlikely to be restored. “I suggested he temper his expectations. Those are my words exactly. He can’t bring them back,” said Murray.