Trump admin’s pandemic surrender gets impassioned response from WHO | Techilink 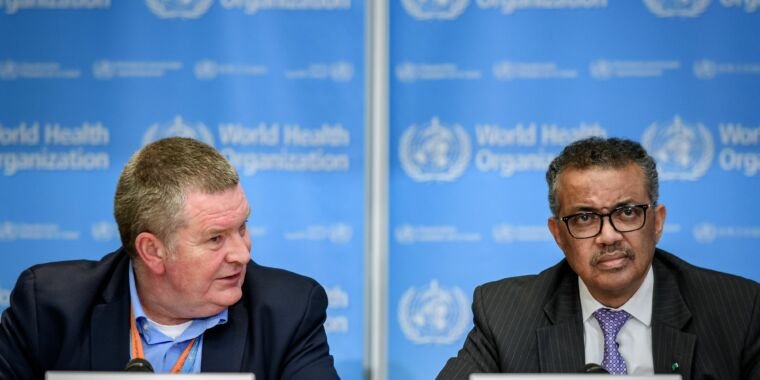 Top World Health Organization officials at times appeared annoyed, baffled and fatigued Monday when faced with comments from White House Chief of Staff Mark Meadows suggesting that the United States was trying to control the spread of the pandemic coronavirus, SARS. get, have given up. CoV-2.

“We’re not going to get the pandemic under control,” Meadows said in a CNN interview on Sunday. Instead, we will focus on “vaccines, therapies and other areas of mitigation,” he said. The comments caused a stir, which Meadows tried to suppress on Monday. But his clarification only reinforced his earlier comments.

“I mean, if we look at this, we’re going to beat the virus. We’re not going to control it. We will try to contain it as best we can,” he told reporters outside the White House yesterday. He again emphasized the need for therapies and vaccines.

In a WHO press briefing Monday, WHO Director-General Tedros Adhanom Ghebreyesus said bluntly: “Giving up control is dangerous.”

While Tedros agreed on the importance of therapies and a vaccine, he noted that they are not yet available. As such, “control should also be part of the strategy,” he said. “Government must do its part and citizens must also do their part. Otherwise, this virus is dangerous. If it is unleashed, it can wreak havoc.”

WHO officials made this point repeatedly during Monday’s press conference, sometimes in impassioned and tense pleading given the current state of the pandemic. Last week, the WHO recorded the highest number of COVID-19 cases in the pandemic to date. The world is approaching 44 million cases and has recorded more than 1.16 million deaths. While many countries in the world are currently struggling with a wave of new cases, the US stands out as one of the most ravaged, with 8.7 million cases and nearly 226,000 deaths.

The US is currently climbing to its third and highest peak in new cases to date. On Friday, the country recorded the highest daily number of new cases in the pandemic, with 83,010, according to The COVID Tracking Project. The current seven-day moving average is close to 70,000. On Monday, nearly 43,000 people in the country were hospitalized with COVID-19, and the seven-day rolling average of daily deaths was nearly 800.

WHO officials have often acknowledged that in general people are fed up with trying to control the virus – physical distancing, not visiting relatives, canceling events. But to be honest, the virus doesn’t care, and abandoning control efforts is a recipe for disaster.

In effect, what Meadows suggested — not to control the virus, but to mitigate its effects — is to essentially allow the virus to spread to the healthy while protecting the most vulnerable. Protecting the most vulnerable is an “honorable goal,” noted WHO Director Michael Ryan. But “the difficulty arises in trying to actually achieve that goal.” This could work if, for example, you can identify the most vulnerable people who are usually in nursing homes. In that hypothetical situation, you might be able to shield them, he says. But that’s not the reality:

He also offered a stark warning of what could happen if countries and governments don’t try to control the virus. He noted that in April and March, many places around the world, including some in the US, were using “mitigation” — he used quotes for this word — because their strategy and “emergency rooms were overwhelmed and we had freezer trucks going to the back of hospitals,” he said. “That’s the reality of reducing disease in the face of a tsunami of cases. You have no capacity to cope and that’s the fear right now.”

The US is currently seeing a surge in hospitalizations, with some area hospitals and intensive care units overwhelmed and forced to open field hospitals.

Ryan’s overwhelming response to Meadow’s comments was unusually impassioned by the typically steady WHO press conferences. At times he was clearly frustrated; sometimes he got energy. At other points, Ryan seemed bewildered and tired, and he let out a defeated sigh. Perhaps the nadir in his response came when he acknowledged that convincing some people to follow the control efforts seemed hopeless.

Not everyone accepts what we need to do to save lives and stop the pandemic, he acknowledged. “They don’t believe in this disease,” Ryan said. “They don’t believe we have a pandemic. How can you convince someone to do something if they don’t really believe there is a problem. You really can’t think about that.”