Triclosan, banned from soap but not toothpaste, can help superbugs in the gut | Techilink 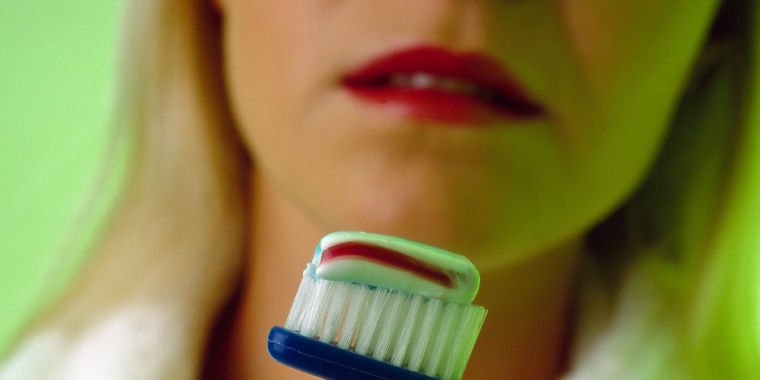 Bacteria-destroying toothpastes that help prevent cavities in your teeth could make tiny dents in the community of microbes in your gut — possibly allowing antibiotic-resistant bacteria to fill — preliminary data suggest.

In a small study, women who switched to brushing their teeth with toothpaste containing the antimicrobial triclosan saw a disturbing shift in the microbes in their guts and a small change in drug resistance, Stanford researchers report.

The data is preliminary — it has not yet been peer-reviewed or published in a journal — and the study was small, including women and babies from just 39 households. But the findings are consistent with several other studies that showed that triclosan and other common antimicrobials can cause subtle disruptions in the almighty gut microbiome.

Last fall, the Food and Drug Administration banned triclosan and 18 other antimicrobials from soap. After years of studying data, the agency concluded that adding the chemicals to soaps didn’t make the soaps more effective at expelling germs — first, people usually don’t wash their hands long enough for the antimicrobial effect to take effect. In addition, the chemicals posed potential risks.

Researchers have reported that triclosan can disrupt microbial communities in the guts of rodents and fish and promote drug resistance. In rats, it helped the nasty ones Staphylococcus aureus set up shop in the nose. Other studies have shown that it can disrupt hormone signaling, especially thyroid, testosterone and estrogen regulation, which can cause a host of subtle developmental problems in exposed children. And after the chemicals are flushed down the drain, researchers have found that they wreak havoc on the microbial communities that break down the sewage in wastewater treatment plants.

Yet triclosan and its ilk, such as triclocarban, are ubiquitous. Manufacturers have used them not only in soaps, but also in toothpastes, plastics, fabrics and other household items. As such, triclosan can be found in the urine, blood, breast milk, and snot of humans.

However, the FDA’s ban only applied to soaps. The agency focused in particular on soaps as it became increasingly clear that “antibacterial” soaps were no more effective than regular soap at removing bacteria. But for other products, such as toothpastes, there is evidence of a benefit. Studies have shown that adding triclosan to toothpaste is effective in helping prevent gingivitis and plaque. And with no clear evidence of harm from triclosan-containing toothpastes, the FDA considers the benefits to outweigh the potential risks. Triclosan is mainly used in Colgate toothpastes.

But scientists are still chasing the possible health effects of triclosan and other antimicrobials. In the new study, Stanford researchers, led by Ami Bhatt and Julie Parsonnet, sought to assess the effects of triclosan on the gut microbiomes of new mothers and their babies. The team enrolled 39 mother-child pairs and randomly gave 17 of them batches of triclosan-containing household products, including toothpastes, to use.

By collecting stool samples over the course of a year and testing them for their microbial composition, the researchers were able to determine whether the antimicrobial products had any effect. Overall, the team found no major differences between the groups. Triclosan products did not seem to interfere with the development of the babies’ microbiomes. And the adults showed no major changes in microbial diversity.

But there were subtle effects in the adults. In the months after women specifically switched to using triclosan-containing toothpaste, the amount Proteobacteria increased in their bowels. This group of bacteria includes E coli and Salmonella. While not all members are harmful, many of them are known to be capable of becoming broadly resistant to antibiotics. And crashes into it Proteobacteria in the gut are associated with “dysbiosis,” basically an excessive microbiome that can contribute to health problems, such as intestinal inflammation.

The overall effects are minor, the authors note. But the findings suggest that “personal care products not covered by the FDA ban may play a role in the expansion of antibiotic-resistant species in the gut,” they conclude.

The study has some major limitations. It’s very small, short, unassessed, and it didn’t have full control of exposure to antimicrobials. Although the mothers who received the triclosan-containing products had more triclosan in their urine than the other mothers during the study, those other mothers had higher levels of triclosan than expected. This suggests that they had other products in their household, for example plastic, that secreted triclosan. With the ubiquity of these chemicals, it’s not surprising. But it means that the effects of triclosan can be underestimated.

Still, the findings “emphasize the need for consumer safety testing of consumer antimicrobial products on the human microbiome,” the authors said.