“Tree of Life” Facing an Outbreak of Deaths | Techilink 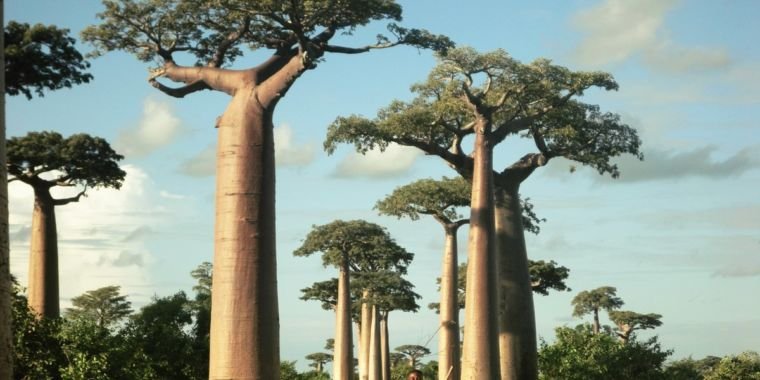 Baobabs have super thick trunks and branches that look like root systems reaching for the sky. African bushmen said that when the god Torah created the world, he hated the baobab growing in his garden, so he threw it over the wall of paradise to the earth below; it landed upside down and kept growing that way. Others argue that Thoróra had to uproot the trees and replant them upside down, because when they were initially planted correctly, they kept walking. Tribal elders and kings held meetings under baobab trees, believing that the spirit of the tree would guide them in making decisions.

On a more practical level, the baobab is known as the tree of life because it can store water in its huge trunk during the rainy season and bear fruit later in the dry season, when other food is scarce. But associating them with life can be temporary; the oldest and largest of these trees are dying.

Baobabs periodically produce new stems like other trees make branches, which is why they appear so thick. They start with one stem and grow additionally in a ring shape. Sometimes the multiple stems are apparent, when fused only at their bases and each grows outwards like an inverted cone. But sometimes the stems fuse together to look like one giant round trunk, with a hollow cavity inside that can be used as a shelter, grain storage, water reservoir, or even a burial ground. Or a pub.

Because the stems fuse over time, the age of the tree cannot be determined by counting rings of fallen specimens, as is done with other trees. In 2005, a group of scientists developed a method to measure the age of living baobabs. They use accelerator mass spectrometry radiocarbon dating of small samples collected from the inner cavities and from other areas on the hull. This is basically how they determined that all baobabs are actually multi-stemmed. They found that the wood in the center of the stems is the oldest, with younger wood radiating outward toward the surrounding area and also inward toward the cavity.

Since 2005, the group has dated more than 60 trees, all of them the largest and potentially oldest baobabs in the world. To their surprise and annoyance, they found that the largest and oldest trees—or the largest and oldest parts of the surviving trees—have died. These trees all had a circumference of more than twenty meters, averaged twenty-one meters in height and ranged in age from 1100 to 2500 years. They all lived in southern Africa. And as of 2006, their oldest stems – in some cases all from their stems – fell over and died.

“The death of the majority of the oldest and largest African baobabs in the past 12 years is an event of unprecedented magnitude,” the scientists write. “These deaths were not caused by an epidemic and there is also a rapid increase in the apparently natural deaths of many other adult baobabs.” After a century of people using their insides as living quarters, maybe they were just done.