Transparent solar cell turns on and generates its own light | Techilink 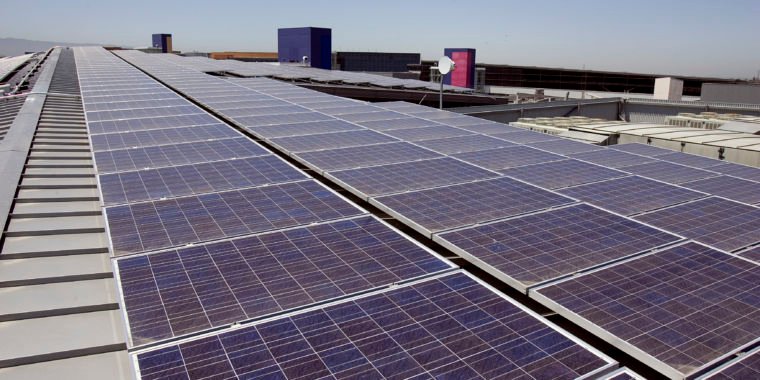 I love solar energy. Thanks to solar energy, I have not had to pay for electricity on average for the past two years. Just because solar is already pretty good doesn’t mean it can’t be even cooler. Ladies and gentlemen, I give you transparent solar panels.

This research area focuses on a number of areas where solar panels can be improved. For example, it would be very nice if we could coat windows with solar collectors, but still let the light through. And as a side effect, it may allow us to use each photon of light a little more efficiently. But how should we do that?

It turns out that these goals are related. One of the ways solar panels lose energy is when the photons have more energy than the solar cell can handle.

A photon with much more energy than the band gap can still generate an electron, but that electron has a lot of excess energy, which it loses as heat. Eventually all electrons leave the solar panel with approximately the same energy as the band gap of the solar cell material. It would of course be nice to prevent the excess energy from being wasted in this way.

To solve this problem, a group of researchers used a nanoparticle doped with ytterbium (a rare earth metal). Ytterbium likes to emit light at almost exactly the wavelength that silicon prefers to absorb (which generates electrical energy in a solar panel). Even better, ytterbium, under the right conditions, will absorb and emit one blue/violet photon two photons at the favored energy of silicon. Best of all, the ytterbium doesn’t like to absorb the photons it’s emitted so it doesn’t interfere with the panel’s operation.

The main, somewhat cynical effect of this is that researchers can make bold claims about achieving ~160 percent efficiency (you don’t get quite 200 percent because the process isn’t perfect). But there are also some pretty cool perks.

Conducting light to a solar cell

This kind of two-photon-from-one process has some additional advantages. The researchers created a polymer-glass material with the nanoparticles embedded in it. The particles absorb ultraviolet/deep blue light from the solar spectrum, but allow the rest to pass through. This creates an apparently clear glass structure.

When the ytterbium emits infrared light, it will usually do so in directions that capture the light in the glass. The glass guides the light to the edges, where it can be absorbed by a silicon solar cell. Think of a pane with a photovoltaic frame.

The end result at this stage is a very inefficient solar collector. Blue light generates infrared light with an efficiency of about 180 percent. However, only three percent of the blue light is absorbed. (Remember when it looks transparent? Here’s why.) Then there’s transport losses, which makes the whole idea a bit long-winded now.

Yet invisible solar panels may be in our future. The absorption efficiency can be improved. The researchers claim they should be able to see triple improvements with their existing materials and methods.

Looking at the conduction system, I’d say they can probably reduce transport losses and allow the vast majority of infrared light to reach the solar cell. In addition, if you don’t mind seeing a little yellow, a change in material can improve efficiency even further by using photons from the lighter blue part of the spectrum.

Finally, silicon is not the only material for solar panels. There are more efficient materials available – they are just very expensive. But in this configuration you only need solar cell material at the edges of the glass plate. This reduces the amount of photovoltaic material required per square meter of panel. At least that’s what the researchers claim.

I’m not so sure about that argument. These highly efficient materials are tuned so that their band gap matches the solar spectrum. Light absorption followed by re-emission at longer wavelengths will create a mismatch between the light spectrum and the material bandgap. You can’t get around that, because you need the absorption and re-emission to get light conduction, without which you don’t reduce the amount of material needed for the solar panel.

I’m pretty sure that’s the wrong thing to do. It would make more sense to just have a giant dish to track the sun and aim the light directly at the expensive solar panel material (and watch the cell overheat). Still, I like the idea of ​​transparent solar cells, and I hope the researchers make it work.