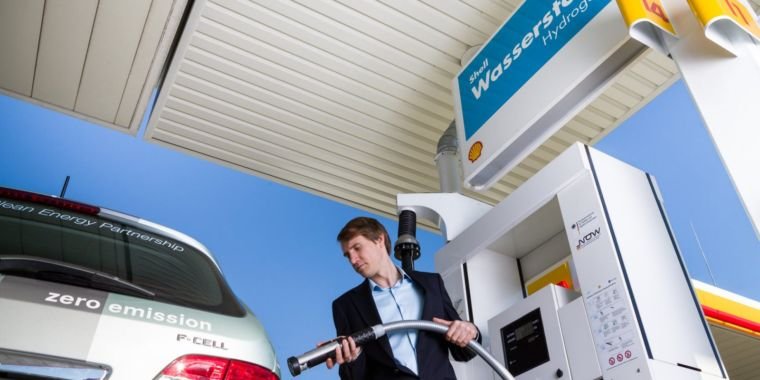 Toyota and Shell are likely to build seven hydrogen refueling stations around California if the state’s Energy Commission approves a proposed $16.4 million grant.

Both Toyota and Shell see their current products – combustion engine and gas vehicles respectively – gradually disappear in the long term (think 2050). They are now diversifying to be ready if and when the economy is more favorable for the switch. The announcement of the California stations comes after Toyota, Shell and 11 other energy and transportation companies jointly agreed to invest nearly $11 billion in hydrogen technology in January.

Toyota has spent years developing iterations of its hydrogen-powered Mirai. The Japanese car manufacturer expects that in 2050 only 10 percent of its vehicle fleet will consist of combustion engines. Shell has also been working on the fuel angle of hydrogen fuel for years. It argues that progress on hydrogen fuel is needed because no single low-carbon solution, such as battery-powered electric vehicles, fits every situation.

Hydrogen has a number of advantages as a transportation fuel: it produces no greenhouse gases to power the vehicle, and the fuel’s by-product is water (H2Oh, a substance that is harmless to humans in moderate amounts). Filling up with hydrogen only takes a few minutes, as opposed to a much longer wait to charge an electric vehicle. But fuel cells also have disadvantages. Creating, compressing and storing H2 can be energy intensive, and if that energy does not come from renewable sources, it reduces the benefits of switching to hydrogen-powered vehicles. Storing hydrogen can also be difficult unless it is in a high-pressure environment or kept at a very cold temperature.

But oil companies such as Shell have an interest in drivers continuing to fill up at their stations. Shell has conducted a number of pilot projects in Germany to advance hydrogen fuel cell research and the Anglo-Dutch company currently has two hydrogen refueling stations in California.

In a Toyota North America press release, Craig Scott, senior manager of advanced technology for vehicles, said that “Shell’s partnership will bring the expertise and resources of a major energy company to California hydrogen infrastructure efforts. The Toyota and Shell team will take us one step closer to a hydrogen society.”

A “hydrogen society” seems far-fetched for the near and medium term, as California currently has only 25 hydrogen refueling stations, according to Bloomberg. In other parts of the country, hydrogen filling stations are even rarer. Still, buyers in California can buy hydrogen fuel cell vehicles from Toyota, Hyundai, Honda and Daimler today, the news outlet reports.