Tooth and Tail review: delicious rodent-packed StarCraft for the rest of us |Techilink 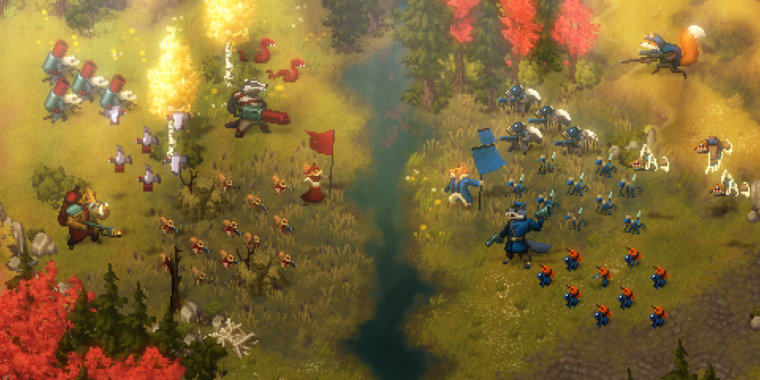 StarCraft II thought it held the secret to delivering a really accessible version of its predecessor. The original game’s troop management combat is unmatched in terms of balance, so the sequel focused more on QoL tweaks like resource management, unit assignments, and movement paths. Basically, you were able to click a little less, or else you were still largely stuck with the same gameplay systems and faction differences (aside from some significant rhythm-shifting changes).

But what if a StarCraft sequel, spin-off, or shameless tribute took the entire game formula apart and then reassembled the LEGO pieces to take on a new, more approachable shape? No RTS game in the last two decades has reinvented the genre like the incredible Tooth and tail, a long-term project by IGF Award winner Andy Schatz. It’s like the three-man studio Pocketwatch Games looked at the mouse cursor in RTS games, joked about turning into a real mouse, and then shouted their own bluff.

In the resulting game, players compete in asymmetrical exploration and exploitation battles that add speed, accessibility, and surprises (along with cute and, uh, cannibalistic critters) to the RTS world. But the depth is still there. Say goodbye!” to countless shortcuts and skill trees. Say hello!” to the first RTS game that legitimately works with a standard gamepad (and even shines as a split-screen versus a battler).

Stop arguing – you can! both got the ferrets

T&TThe basic skeleton will sound familiar to anyone who has clicked through an RTS for the past 30 years. Manage an economy of resources to build an army, expand to other bases on a map, and eventually destroy any number of rivals. (Up to four players can compete in team or free-for-all battles). Each army unit has its strengths, weaknesses and resource costs, and victory requires you to understand how your army, which is likely to be different from your opponent’s, can be particularly victorious.

The game’s unique features begin with your cursor, which does not exist as a pointer icon, but as a walking, talking mouse. (If you’re wondering, it’s dressed as an army commander from early 20th-century poverty-stricken Eastern Europe.) To do something on the battlefield, such as give orders to armies, claim new bases, build or sell buildings, or spying on your opponent, you have to direct your commander, either using a joystick or WASD keys, to run, run, run.

But that doesn’t mean this game is so much like “active RTS” games like Herzog Zwei or AirMech. Unlike those games, your T&T commander cannot fire a pistol or intervene directly in any other way. Instead, you have two primary buttons: collect all armies or collect armies of one kind. You can use different taps to order both selections to: focus on a specific enemy unit; make units move and attack until they reach a certain point; or sheath their weapons and retreat to your position. The movement is relatively slow, although you can “dig” to any captured base by holding down a button to do a little digging. Be warned: your Commander health bar regenerates very slowly, and if you’re killed while spying on an enemy (or waiting for your map-twisting lair), you’ll freeze respawn for a few seconds.

Additionally, Tooth and tail opens his unit selection before each battle to a free draft system. Instead of choosing a faction with its own balanced, predetermined pack of units and upgrades, players must choose six of the game’s 20 unit types. Fifteen of the choices are active soldier types, broken down into three levels of power and value. The remaining units are defensive and barrier options. If you want to burn five of your picks as barriers, go ahead – and your enemies can do the same without any limitation on duplicates on the battlefield.

Those six units are for your battle, by the way, meaning you can’t build research stations or base upgrades. The units you build cost ‘food’, your only resource, and you can only get more food by building farms. Each windmill you capture counts as a ‘base’ and you can build up to eight farms around each base. These all run out eventually, so you’ll want to keep buying more of them (and be aware of each card’s limited, finite resources before reaching an endgame).