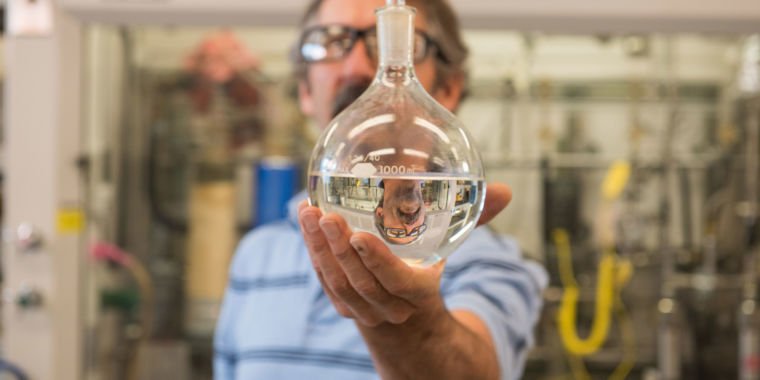 A little after 7pm ET tonight, a Virgin Atlantic 747 will take off from Orlando, Florida, bound for London’s Gatwick Airport. This flight will be the first to use a mixture of jet fuel and fuel made from industrial waste gas from a steel mill in China. This waste gas fuel will displace some of the petroleum-based jet fuel that usually fills the tanks of a commercial jet.

The company that makes the alternative fuel mix, LanzaTech, says third-party estimates show that its fuels reduce greenhouse gas emissions by more than 70 percent compared to burning the same amount of jet fuel.

The waste gas fuel can be made from a variety of gases, LanzaTech says, but this jet fuel comes primarily from waste carbon monoxide commonly released into the atmosphere by steel mills. Instead, LanzaTech captures the gases coming from a steel mill and feeds them to a collection of patented microbes that eat the gases and make alcohol that can be refined into long hydrocarbons that make fuel.

LanzaTech’s partner in creating this process is the Pacific Northwest National Laboratory (PNNL), which said in a press release today that the resulting fuel “can be used for a range of low-carbon products, including alcohol-to-jet synthetic paraffinic kerosene ( ATJ-SPK).” That particular type of jet fuel was recently approved for use in commercial flights “mixed up to 50 percent with conventional jet fuel.” On Virgin Atlantic’s maiden flight, only five percent of jet fuel will be replaced by industrial waste gas fuel.

To make this fuel, LanzaTech harvested ethanol from its microbes in China and sent that ethanol to its plant in Georgia. There it was refined into 4,000 liters of ATJ-SPK fuel. The company plans to build a larger facility at its Georgia site to scale up its fuel production process. PNNL notes that the Department of Energy’s Bioenergy Technologies Office has been instrumental in developing this fuel process.

This process does not have the same carbon sequestration benefits as ethanol made from plants; that is, plants consume carbon dioxide as they grow, taking some of that greenhouse gas from the air. CO2 is released again when vegetable ethanol is made and then burned (although there is still a carbon advantage over fossil fuels).

In LanzaTech’s scenario, there is no carbon sequestration period to begin with, but the process takes polluting gases that are still released into the atmosphere and reprocess them. The resulting fuel still contains CO . free2 because it is burned, but much less than would have been released if new oil had been drilled and refined into single-use jet fuel.

Freya Burton, a spokesperson for LanzaTech, said the company’s microbes are capable of eating a mixture of carbon monoxide, hydrogen and CO.2. The fuel LanzaTech produced for today’s Virgin flight primarily used carbon monoxide, which contributes to ozone pollution (though not a greenhouse gas), which would otherwise have been released into the atmosphere. The resulting fuel also releases fewer pollutants such as nitrogen oxide, sulfur dioxide and soot.

Burton said LanzaTech is also working to use its waste gas capture and processing methods to produce chemicals and consumer products that would otherwise be produced with oil. In those cases, LanzaTech would “effectively lock in the carbon”.

For now, jet fuel is a good start. “This fuel exceeds the properties of petroleum-based jet fuel in terms of efficiency and burns much cleaner,” said John Holladay, PNNL’s deputy manager for energy efficiency and renewable energy, in a press release. “And by recycling carbon that’s already in the environment — in this case, waste gas streams — the world can keep more petroleum in the ground.”

One of the main selling points for LanzaTech’s technology is that it could eventually be able to compete on cost with jet fuel. The company estimates that 65 percent of the world’s steel mills can be retrofitted to capture the waste gas needed to power this process.

So far, airlines have been reluctant to make long or even medium term commitments to blend biofuel with jet fuel because making biofuels is so prohibitively expensive. In a press release, Virgin Atlantic notes that this is not necessarily the case for LanzaTech, writing that “because” [LanzaTech] uses an abundant, affordable waste stream, this is set up to keep the fuel price competitive with that of traditional jet.”

Virgin Atlantic stopped announcing purchase contracts, but did write that “airlines like Virgin Atlantic can routinely buy it and fly it, and that’s when the big carbon savings will come.”