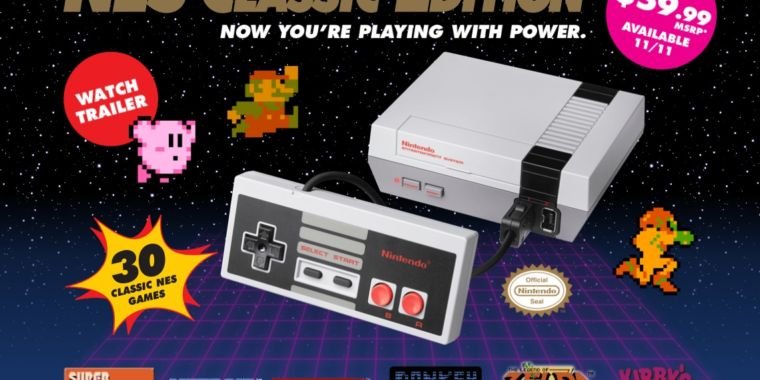 Aside from a hands-off display at New York Comic-Con, we haven’t seen or heard much about the upcoming mini-sized NES Classic Edition since its initial announcement in July. Now comes new information from Nintendo itself and journalists at a recent hands-on preview event. They bring both good and bad news for retro Nintendo fans.

On the good side, the NES Mini apparently has a few graphics options to play with. A recently updated promotional page now highlights three different visual modes: “pixel perfect” (ie square pixels), 4:3 (ie cathode ray tube ratio) and “CRT filter” (ie simulated scan lines on your HDTV). Nintendo also notes that you can create four “Suspend Points” for each of the 30 games on the system. You can lock any of those points so they don’t get saved accidentally.

Hands-on reports from journalists also confirm what we first suspected from an earlier NES Classic Edition trailer: that the emulated graphics and colors on the NES Classic Edition’s 30 built-in games are much more faithful to the original games than Nintendo’s earlier Virtual Console games. releases . Wired’s Chris Kohler notes that “the whites are sparkling white and pop everything in bright colors” on the new HDMI-powered system.

Now for the bad news: that authentic-looking NES controller that comes with the system apparently has a very short cord. USGamer’s Bob Mackey estimates the cord is only three feet long (although Nintendo won’t give an exact length), and Kohler confirms in his impressions that it’s “fairly short.” For context, the cord on the controllers that came with the original NES is about eight feet long.

Eagle-eyed Nintendo viewers suspected this for a while, but the confirmation is now pretty depressing. Those who want a longer cord can opt for a compatible Wii Classic Controller or Classic Controller Pro, but that means sacrificing the classic look and feel of the NES controller. There doesn’t seem to be a wireless control option either, so you’d better have a long HDMI cable or be ready to sit really close to the TV to enjoy your new NES.

On the other hand, the length of the controller’s cord may be inherent in its design. As Kohler points out in his impressions, the authentic replica controllers don’t include any “home” buttons, meaning you have to get up and tap reset on the console to switch games. So being forced to be about three feet away from the console at all times can be considered useful I guess…

If you’re looking for other annoyances, the NES Classic Edition games don’t look like they have the same on-screen instructions as emulated Virtual Console titles. Instead, you need to scan a QR code to load old scans of NES instruction booklets onto your phone. Welcome to the future.

None of these nitpicks will prevent the NES Classic Edition from selling about three gazillion $60 units when it launches on November 11. The device will end up in the Christmas stocking of every nostalgic thirties in the gaming world. But still… would a wireless controller option have been so hard to offer?