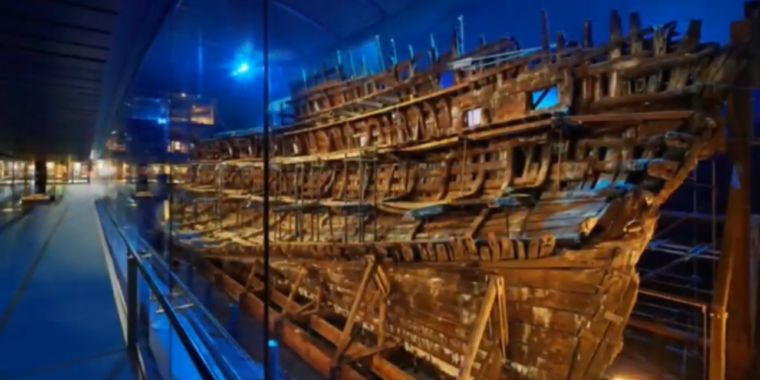 In 1545, newly converted to carry a greater number of heavy guns, the warship Mary Rose sailed into battle against a French fleet north of the Isle of Wight. The debate over what happened next is still heated, but the most widely accepted version is that the added weight of the guns Mary Rose sits almost a meter lower in the water than before. As the ship made a sharp turn—or perhaps when a sudden gust of wind caught the sails—water poured into open gun ports, submerging the ship. Nets in place across the deck, intended to fend off enemy boarders, eventually caught more than 500 sailors aboard as the ship went down.

The Mary Rose, and many of her crew, were buried for the next 437 years under several feet of silt at the bottom of the Solent, the strait north of the Isle of Wight. That silt helped preserve about 40 percent of her hull and about 19,000 artifacts and pieces of wood, which archaeologists recovered in 1982. That’s incredible luck for a 500-year-old shipwreck, especially one as historically significant as the Mary Rosebut the soggy wood of Henry VIII’s prize warship is still under threat.

Eating out in the forest

Some marine bacteria that enter when a ship sinks nibbles on sulfur and releases a compound called hydrogen sulfide. And when iron fittings, guns and other artifacts corrode, they release ions that react with the hydrogen sulfide to produce iron sulfides. In an environment without much oxygen, that makes little difference. And there isn’t much in a few meters of silt at the bottom of the Solent, for example. But when re-exposed to air, the iron sulfides react with oxygen to produce sulfate salts and sulfuric acid, which eat up the already fragile wood and artifacts where wood comes in contact with iron.

To help preserve wood that is very soggy, artifact restorers use a compound called polyethylene glycol (PEG for its friends) to fill and strengthen the wood cells, preventing wood from shrinking, warping and cracking as it dries. The Mary Rose began PEG treatment in 1994, and the soaking spray was eventually turned off to allow the vessel to dry out in 2013. Then the acid became a real problem.

“By exposing the wood to the air, we risked promoting oxidation of the sulfur in the wood,” nanomaterial chemist Serena Corr of the University of Glasgow told Ars Technica. It was a worrisome problem for Eleanor Schofield, head of conservation at the Mary Rose Trust, but over a glass of wine with Corr, she found a likely solution.

Corr had previously worked with magnetic nanoparticles, guided to a precise destination by magnetic fields, for medical imaging and targeted drug delivery. She and Schofield thought a similar approach might work to get the iron out of the… Mary Rose‘s hull and wooden artifacts. When the PEG spray stopped in 2013, conservators sent samples of the wood to Diamond Light Source UK to be checked with X-ray absorption spectroscopy. That would allow researchers to measure which compounds were present and when they formed in different parts of the wood as it dried.

“An initial increase in the amount of oxidized sulfur was observed on the surface of the wood and continued to develop in the wood,” Corr told Ars Technica. Those detailed measurements helped Corr and her team custom design nanoparticles for the task.

Take out the iron

For preservation, each particle is bound to molecules of porphyrin, which in turn will bind to free iron ions in the wood and trap them before they can react to form harmful acid. That whole package is coated in a polymer that responds to temperature changes; at about 22⁰C the composite is a thick gel. With a slight drop in temperature, the polymer becomes a liquid, which absorbs into the wood and takes the nanoparticles with it. Conservators can use magnetic fields to direct the composite to the correct part of the wood and then pull it out again with the trapped iron ions in tow. And when the whole process is complete, they can heat the composite into a gel and peel it off the surface of the wood.

Schofield, Corr and their colleagues tested the nanocomposite on samples of fresh oak, which they first soaked in iron sulfates, and they say it removed almost all of the iron without damaging the wood.

“With the porphyrin, we got about 85 percent of the iron out of the solution, and that was in about 10 hours. I think if we had stayed longer, we might have been able to get more out,” Schofield said during a presentation at the recent 256e National Meeting and Exposition of the American Chemical Society. And that’s a very good sign for upcoming work on ancient swampy wood from the shipwreck, because wood that has been swampy for centuries has a more open, porous structure that makes it even easier for the nanocomposite to soak and make its way in. seep and out.

Soon the nanocomposite will have the opportunity to prove itself on nuclear samples from the Mary Rose‘s hull – much the same that even went to Diamond Light Source to help the researchers understand what happened to the wood as it dried after PEG treatment. If that goes well, restorers will feel confident enough to use the nanocomposite on parts of the ship’s hull and other wooden artifacts where they see signs of iron corrosion.

The chemical reactions that produce the acid will take place in different places and at different times, so restorers will check the vessel and artifacts for problems and then apply magnetic nanocomposite if necessary. And if all goes well, Schofield and Corr want to try a similar approach for other organic materials from the shipwreck, such as leather and textiles (the artifacts recovered from the seabed include pieces of velvet, tarpaulin, and other fabrics).

“Once we’ve shown that the technology can work, we can adapt it to some of the other materials,” Schofield says. “One of the big problems for us with anything is that these artifacts have been soaking and marinating in the seawater for years and years and years. There’s all kinds of stuff in there, so once we get the technology up and running, we can try to look at different means.” to sequester the particles.”