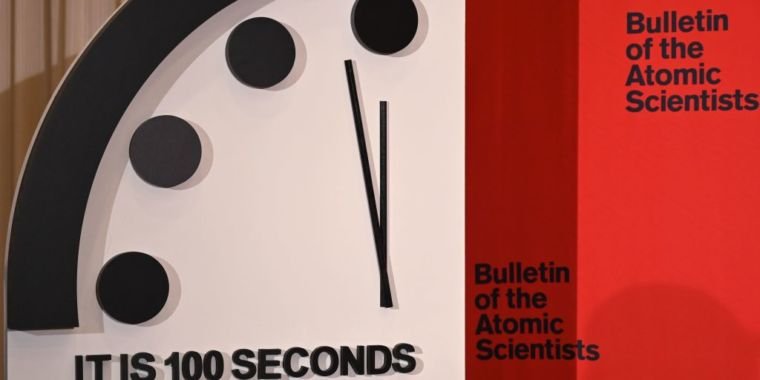 Today, the Bulletin of the Atomic Scientists released a statement that the group’s Science and Security Board had moved the hands of the symbolic Doomsday Clock by 20 seconds to 100 seconds before midnight. Since the advent of the Doomsday Clock — even in the peak years of the Cold War — the clock’s minute hand has never passed the 11:58 mark before.

In a statement about the change, Rachel Bronson, president and CEO of Bulletin of the Atomic Scientists said:

As for the Bulletin and the Doomsday Clock, the world has entered the realm of the two-minute warning, a period when danger is high and the margin of error is low. The moment demands attention and new, creative responses. If decision-makers continue to fail to act — pretending it’s no more urgent to be in two minutes than the previous period — citizens around the world should rightly repeat the words of climate activist Greta Thunberg and ask, “How dare you?”

Before 2017, the clock hadn’t been on that mark since 1953 — the year the United States and the Soviet Union both conducted atmospheric tests of their first thermonuclear bombs. Even during the Reagan years—when the world came closest to nuclear war—the clocks were pushed forward just three minutes to midnight. And in the fictional world of the original guards comic books, the clock never went beyond five minutes to midnight.

The sum of all fears

The reasons for adjusting the time on the Doomsday Clock extend far beyond the risk of nuclear destruction. Over the past two decades, concerns about nuclear proliferation and climate change have largely caused the ticking of the clock. The last time the clocks were turned back one minute – in 2010 – was because of the perceived progress on climate change by the UN conference in Copenhagen and the ratification of the New START arms control agreement between the United States and Russia.

All those good vibes have been obliterated in the past 10 years. And now the Security Council has added another cause for concern: cyber warfare and other “disruptive” technologies.

“Humanity continues to face two concurrent existential dangers — nuclear war and climate change — exacerbated by a threat multiplier, cyber-enabled information warfare, which is undermining society’s ability to respond,” Science and Security Board members wrote. in a joint statement. “The international security situation is dire not only because these threats exist, but also because world leaders have allowed the international political infrastructure to manage them to erode.”

Objectively measuring things like ‘international political infrastructure’ is difficult. And not much has really changed since 2019, when the board decided not to move the hands of the Doomsday Clock. At the time, the administration called the state of global security a “new abnormality” and warned against the use of “cyber-enabled information warfare by countries, leaders and subnational groups of all kinds.” The council also expressed concern about the impact of technologies such as artificial intelligence.

But all that is measurable is the degree of inaction on climate change. With the US withdrawing from the Paris climate accord, the world as a whole has done little to meet agreed deadlines, with efforts to meet the numbers needed to prevent the global average temperature from rising more than 2° Celsius. rises, be much too short. The most recent UN climate summit ended with no solid plans to move forward.

This year, the board piled on a few more “disruptive” technologies, including genetic engineering, synthetic biology, the massive collection of health and genomic data, and their potential use in the development of biological weapons. Concerns about AI-based weapons and the integration of artificial intelligence into nuclear command and control systems – something that harks back to the 1982 film war games– were also mentioned. Russia field-tested an AI-based field command and control system last year, but there’s no specific evidence that any state or non-state actor is doing any of these things. Still, the board members are shocked by the possibility.

Then there’s the urge for hypersonic weapons. Programs such as the United States Department of Defense’s Prompt Global Strike effort, the Air Force’s Advanced Rapid Response Weapon (ARRW) and Hypersonic Conventional Strike Weapon (HCSW) – “Arrow” and “Hacksaw” – and Russian and Chinese efforts to and tactical hypersonic weapons aim to create weapons that cannot be countered by current defenses and hit targets with great precision. These weapons “will severely limit response times available to targeted countries and create a dangerous degree of ambiguity and uncertainty, at least in part due to their likely ability to carry nuclear or conventional warheads,” the board members noted.

That uncertainty could lead to a rapid escalation from conventional to nuclear conflict, they warned. “These weapons are very destabilizing to say the least and predict a new arms race.” Combined with concerns about the militarization of space and the further automation of weapons and sensor systems “and the new, more aggressive military doctrines asserted by the most heavily armed countries,” they wrote, “could lead to global catastrophe.”

man in the loop

These systems have certainly contributed to an arms race of sorts. But none of them have been deployed. And given the current tensions in the world, older, less sophisticated systems pose an equally great threat, as evidenced by the downing of a Ukrainian plane by an outdated automated air defense system in Iran. The problem is not so much the technology as the people who use it.

That is, the only thing that has really changed to advance the countdown to Armageddon in the Bulletin of the Atomic Scientists’ estimate is the current political situation in the world. This situation is one of passivity and increased combativeness, and it has existed in one form or another (with a brief “end of history” pause in the early 1990s) since the first nuclear weapon was detonated. The only difference from a year ago is that we have had more time to process the magnitude of the impact of social media campaigns and the fragmentation of consensus on topics of global concern.

As someone who served in the military during the Cold War – bobbing across the world’s seas with what I can neither confirm nor deny were nuclear land attack cruise missiles in armored boxes about 100 feet (100 m) from my bed – I can say that we have a much further away from a nuclear doomsday than we were in 1982.

Unfortunately, the lessons the United States and the Soviet Union learned from the abyss they faced in the early 1980s have not been effectively passed on to today’s world leadership regarding gun control — or regarding other existential threats. So maybe it’s helpful that the Doomsday Clock has moved forward 20 seconds, if only to remind us that the people who are able to do the most things about things don’t have an eye on the clock.

The US withdrawal from the Intermediate Nuclear Forces (INF) Treaty, failure to renew the New START treaty or enter into other arms control negotiations, the apparent collapse of the agreement to curb Iranian nuclear research and the derailment of the negotiations with North Korea have all eroded the stability of the nuclear equation that we finally got right when Reagan and Gorbachev blinked.