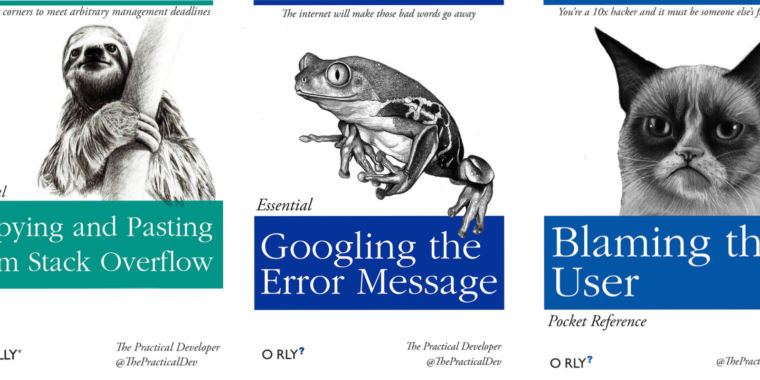 Ars Technica author and longtime friend Rob Reid recently had the opportunity to interview legendary publisher Tim O’Reilly about O’Reilly’s new forward-looking nonfiction book. Given O’Reilly’s importance and influence – and who hasn’t consulted at least one of his company’s animal-covered books to shed light on a difficult piece of technology? – we asked Rob to write us a summary of the interview that we could share with the Ars audience. The full interview is included in this piece.

It’s almost impossible to overstate the influence Tim O’Reilly has had on technology over the long period of his career. But I will try. First, he is the preeminent publisher in a modern field that inhales books despite their ancient form, while software developers, IT people and others are constantly racing to keep up with the languages ​​and skills of their field. He also launched the first commercial website long before Netscape or Yahoo even got around to it (harbinger of another big trend: AOL bought that site and screwed it up right away).

Convinced that the web would be hot, his company convened the summit where Marc Andreessen and Tim Berners Lee first met. He later organized the conclave that literally called “open source software” and proclaimed the precepts of the open source movement. While he didn’t coin the term, Tim (in fact) mentioned the Web 2.0 era and also defined it with a hugely influential article and conference series. He later published the magazine that gave us both the word “maker” and the Maker Faire, and the magazine is still at the heart of the maker movement.

Since I have not overestimated Tim’s significance, I will now tell you about his new book, WTF, which comes out today. As we all know, this stands for ‘What’s the Future’. As Tim points out, “WTF” can be a cry of horror or surprise. An optimist by nature, he tries to push us towards the latter despite the overwhelming 2017ness of things. I recently spoke with Tim for an in-depth discussion of his book, its future, his personal history and the true meaning of WTF. Our interview is the last episode of the After On podcast. You can listen through your podcasting app (just hit Search and type “After On”) or by clicking here:

I am not a book reviewer and this is not a review, although I do want to say that Tim’s book is a celebration for me. Part memoir and part progressive manifesto, it’s full of contrarian insights and fresh lenses to frame technology’s ever-baffling trajectory. Everything is backed up with first-hand data, facts and reports from Tim’s decades on the front lines. And it’s infused with a down-to-earth positivity that elegantly refutes the sudden reflexive pessimism of a community that (let’s face it) is pretty well off compared to most people in history.

For example, although I admire the man, Jaron Lanier once ruined my day by eloquently stating, “At the height of his power, the Kodak photo company employed more than 140,000 people and was worth $28 billion dollars. They even invented the first digital camera. But today Kodak is out of business and the new face of digital photography has become Instagram. When Instagram was sold to Facebook for $1 billion in 2012, it employed just 13 people.”

In our interview (and also in his book), Tim rejects this perspective, which he gently labels “impossibly wrong.” Instagram is just a tiny phenomenon, a glittering but tiny speck on the hull of a leviathan transformation — one that has created untold millions of jobs (and, yes, destroyed millions of others). “Think of the mountain of work it takes to get us Instagram,” says Tim. “This huge economy of data centers. From internet connectivity. From manufacturing phones, which are more ubiquitous than cameras ever were. And think of the number of small shops selling cell phones everywhere. How many people work for Comcast, T-Mobile, Sprint and everyone else? [other] carriers. And all the cables that had to be laid… just massive amounts of work to keep that Instagram culture alive.”

Humans as the gut bacteria of technology

This is not to say that Tim lacks empathy for the disrupted people. Indeed, he is full of it and downright pushy when he talks about modern inequalities. He likens emerging aspects of our world to algorithms pursuing masterful ‘fitness functions’. Just as Google aims to maximize ad revenue, the markets drive companies to maximize profits at the expense of all other goals and values ​​(he goes so far as to liken the financial markets to a rogue AI). Despite all this, Tim remains heavily invested in the free market system. After all, he’s an entrepreneur with 400 mouths to feed at O’Reilly Media – a trick he pulls off pretty well.

Tim talks extensively about platforms in our interview and what he calls “fat marketplaces.” He extends this definition from literal markets like eBay to more figurative markets, like the Microsoft ecosystem of the 1990s. Those who desecrate their marketplaces by devouring participants they should be empowering—again, think ’90s Microsoft, or more recently, Twitter—do so at a high cost to themselves.

“Think of the mountain of work it takes to get us Instagram,” says Tim.

Our interview touches on the fascinating idea that humanity can be seen as a microbiome for huge techplexes like Google and Facebook. I admit I have a soft spot for this concept, as I developed it independently in my most recent novel (where my treatment is more playful than Tim’s, although I take the idea very seriously). In the 1990s, he noticed how certain engineers were used almost as software components within organic, ever-evolving “applications” such as Yahoo. When applications generally traveled as physical totems frozen on disks, this was a real WTF moment.

Since then, Tim has seen this symbiosis grow deeper and deeper. AI applications are now often trained by humans through Amazon’s Mechanical Turk service. And think about how Google gets smarter when we pick one link over another on a page — then go back to Google because the link wasn’t suitable, or disappear because it was. “So there is a symbiotic intelligence,” he emphasizes. “There are people in it: the programmers who write the algorithms and manage the workflows. And then there are people outside, communicating with it.”

We are the powerhouse of the cell

It gets deeper when companies like Uber and Lyft build bridges to the physical world. At Lyft’s headquarters, you might think of software components as workers in a factory, with programmers for managers. Managers who receive signals from customers and continuously coach the market and their components to do better work. The components themselves manage another level of the worker – the drivers – who are basically ‘augmented workers’, their capabilities enhanced by digital tools such as map services. Tim calls these types of companies “composite organisms” or even “composite beings.” He likens them to mammalian cells, which long ago partnered with sovereign organisms, which are now our mitochondria (your mitochondria’s DNA is different from yours, attesting to its indie roots).

All of this can lead to poor results for those on the lower rungs. But it can also lead to wonderful results (think how psychic we would all have to be to live on this side of the breakthroughs of the past century – despite societal imperfections). Tim points a finger of warning at the blunders we could make from here and doesn’t minimize them. But on balance he is optimistic. I would add that his personal story is a nice case study for non-STEM people, because Tim – like the founders of Ars Technica themselves – devoted his higher education to studying dead languages ​​(specifically Latin and Greek). As someone who also prepared for his engineering career by studying a non-programming language (Arabic in my case), I approve.

Tim sees smooth sailing if society can better provide for those left behind. In it he cites the bogeymen of all tech optimists, the Luddites. But he imbues his discussion of it with both empathy and optimism. Not the blind optimism of the naive. Not the selfish optimism of the rich libertarian. But the fact-based optimism of a thoughtful technologist who is essentially a realist.

I close with a passage about the Luddites from Tim’s book. I also quoted these words in our interview, because I find them so lyrical and so characteristic of Tim’s perspective:

They were right to be afraid. The next few decades were bleak. Machines replaced human labor, and it took time for society to adapt.

But those weavers could not imagine that their descendants would have more clothing than the kings and queens of Europe, that common people would eat the fruits of summer in the depths of winter. They couldn’t imagine tunneling through mountains and under the sea, flying through the air, crossing continents in hours, building cities in the desert with buildings half a mile high, standing on the moon and placing spacecraft in orbit around distant planets, that we would eliminate so many plagues of disease. And they couldn’t imagine their children finding meaningful work to bring all these things to life.

Rob Reid (@Rob_Reid on Twitter) founded the company that built the Rhapsody music service and now writes science fiction for Random House/Del Rey. His new novel and his podcast are both called ‘After On’.