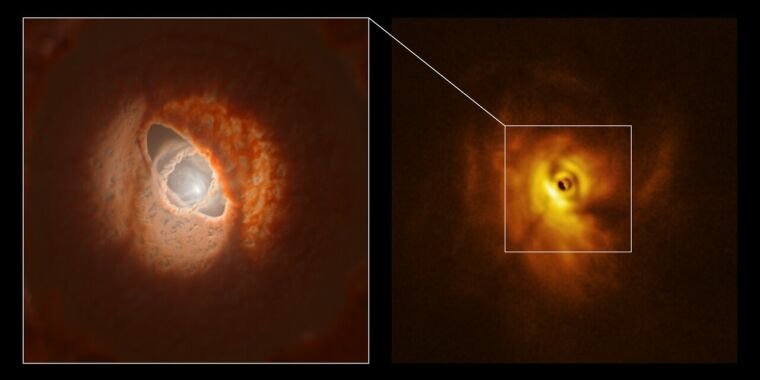 If we only knew about our own solar system — a condition that was largely true even two decades ago — we’d think planets are all neat and tidy. All known rotate in a single plane aligned with the Sun’s equator and move in the same direction. And that’s exactly how they should behave, as planets are formed from a single disk of material orbiting the star.

But as we’ve gotten a clearer picture of the diversity of exosolar systems out there, we’ve seen some pretty strange things, like planets spinning in the opposite direction they should or planets with orbits that are nowhere near the planet. level of their system. While some of these quirks can be explained by gravitational interactions in multi-planet systems, there can be circumstances where planets can form in bizarre orbits.

Now researchers have imaged an exosolar system where that appears to be happening.

Make me a triple

The galaxy in question is called GW Orionis and is located in the star-forming region of Orion, about 1250 light-years from Earth. The system is young, still in development and consists of three stars. Two of them, both slightly larger than the Sun (2.5 and 1.4 times its mass), orbit each other at about the same distance as Earth from the Sun. A third star, also slightly larger than the Sun, orbits these two at a distance that is about eight times the distance between the Earth and the Sun.

The researchers have been observing the system for 11 years, providing them with fairly accurate orbital information. And already here things are a little awkward. The orbit of the outer star is inclined 13° to the plane of the orbit of the inner two stars. That is not particularly surprising. Multistar systems form as a large cloud of gas and other materials as it collapses. Rather than happening in a neat plane, the collapse takes place in a turbulent, three-dimensional environment that often leads to eccentric orbits.

But the orbits of the three stars affected the disk of gas and dust that formed around them. This drive also emerged during the imaging campaign and, as seen above, the results were quite complex. Images of the disk reveal a complicated pattern of bright and dark spots around the stars, along with at least three distinct rings of dense material in the disk.

The bulk of the new analysis involves the research team interpreting this pattern of bright and dark material and generating a three-dimensional model of the system. (Much of the paper consists of sentences such as, “To reproduce the sky-projected shape of R3, its eccentric position relative to the stars, and the shape of shadows S1 and S2, we assumed a non-zero eccentricity (e = 0.3 ± 0.1 for ring R3), with the stars at one of the foci of the ellipse.”) The end result is a physically plausible arrangement of the material around the stars of GW Orionis.

In the model, the outer rings rotate in a single plane, but the plane does not align with the orbital plane of any of the stars. Perhaps more importantly, their orbits are retrograde, in the sense that they orbit the stars in a different direction than the third star orbits the innermost two. The third ring, on the other hand, is in the same plane as that of the stars. But the center is not the center of the orbits of the stars.

Physically there should be a single disk of material surrounding all three stars. Instead, there seems to be a large outer disk to match. But closer to the center of the system, the disk is skewed by the stars’ off-axis orbits. There is a break between the outer and inner ring or, if the material is contiguous, it is deformed as if the inner ring had been pushed through a thin layer of plastic.

If the model is correct, it represents the first apparent case of what is called “disc rupture,” where the misalignment of the material and stars creates forces that can fracture the disk. Cracks can also lead to the formation of rings that precess and begin to wobble about the axis of their rotation.

The authors then took their model of the material’s location and moved it forward in time under the gravitational pull produced by the stars. They found that the system broke up into a series of individual disks, each orbiting the system in a different plane, with the innermost disk paving a large precession around the system that takes 8,000 years to cycle. This disk starts at about 40 times the Earth-sun distance — about the same distance as the inner ring visible in GW Orionis.

The only thing that doesn’t quite match between the model and the actual system is that there shouldn’t be any ring-like structures until material is spinning in different planes. In this case, the two outer rings still appear to be in the same plane. In some cases, such separations are caused by planets forming, which can remove material from the disk and form holes in it. But so far, no planets are visible in the observations.

But that’s not to say that planets couldn’t form in this complex gravitational environment. The authors estimate that there are about 30 Earth masses of material in the inner ring, more than enough to form a planet.

To what extent might this explain some of the eccentric exosolar systems we’ve seen? The authors point out that many of the exoplanets that orbit close to their host stars (about 40 percent of them) orbit in the wrong direction, orbit in an unusual plane, or both. The disc tearing process could certainly explain this. But it’s also possible that many of the planets that land so close to their stars end up there because of gravitational interactions with other planets. And those interactions could also explain the strange nature of these orbits.

So how much is explained by disc tearing remains an open question. Hopefully, thanks to these observations, we’ll have a better chance of discovering specimens of it. More examples would be great, and it would be even better to identify them without 11 years of observations.