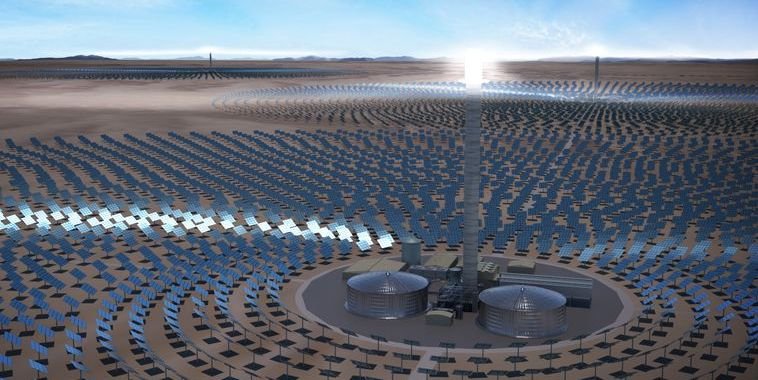 The Chilean government recently gave the go-ahead for a massive solar thermal plant that is expected to produce electricity 24 hours a day, seven days a week – a significant achievement for a plant that relies solely on solar power. The plant, proposed for a site in Chile’s Tamarugal province, would consist of three 150-megawatt solar thermal towers, heated by mirrors placed around each tower reflecting sunlight onto them.

That heat is converted into molten salt, which circulates through the plant during the day and is stored in tanks at night. The salt, a mixture of sodium nitrate and potassium nitrate kept at a balmy 1050 degrees Fahrenheit (566 degrees Celsius), is used as a “heat transfer fluid.” Since energy is required, the salt can be sent to a heat exchanger where it will give up its heat to water to create a superheated steam. That steam is used to move a traditional steam turbine to generate electricity.

In total, the proposed Tamarugal power station could provide 450 MW continuously, 24 hours a day. The plant could theoretically generate 2,600 GWh per year.

SolarReserve, the US-based company that proposed this project, has also proposed two others: a 260 MW, 24-hour power station near the town of Copiapó in Chile’s Atacama region, as well as a 390 MW, 24-hour power station in Chile. the Antofagasta region. Mary Grikas, a spokesperson for SolarReserve, told Ars via email that Copiapó is ready for the shovel, and now Tamarugal also has recent approval from the Chilean government, which has assessed the site for environmental impact. The plant in Antofagasta is still awaiting approval.

However, it may take some time before the plants become reality. SolarReserve must now enter into power purchase agreements (PPAs) so that the company can be sure it can sell its power to grid operators in Chile. The next public auction for such agreements is in October. If the company gets PPAs, SolarReserve will seek financing through investors to actually build the plants. Tamarugal’s reported investment value is a hefty $2.6 billion, but that number could change after the power purchase agreements are finalized, Grikas said. She added that if the company secures a power purchase deal in October, SolarReserve hopes to finalize financing and begin construction on Tamarugal by the end of 2018.

While a 24-hour plant is relatively new, the technology proposed for Tamarugal is not new. In southern Arizona, the Solana solar thermal facility uses concentrated solar energy from rows and rows of parabolic mirrors to heat an oil that is sent to create steam directly or transferred to heat molten salt for storage and later use. Ivanpah is another massive solar thermal facility outside of Las Vegas that was built to produce 448 GWh annually. But that plant has had some bumps in the road — it’s struggled to meet its production targets, and last May one of its towers suffered an electrical fire. Pilots have also complained of glare from the boiler towers.

But SolarReserve may have an advantage in the solar thermal game. Instead of using a heat transfer fluid to heat molten salt, SolarReserve heats the molten salt directly. The company used this technique on a solar thermal project it was building in Crescent Dunes, outside Tonopah, Nevada. While Ivanpah is still short of meeting its production targets, Crescent Dunes recently delivered 105 percent of its contracted output and the plant is running 2 percent above projected efficiency, according to an industry publication. Power magazine.

Crescent Dunes is smaller than what SolarReserve has planned for Chile. The solar company plans to compete with other base load power plants such as coal, natural gas, hydrothermal or nuclear power plants with its Chilean 24-hour solar thermal power plants. Grikas told Ars that the Tamarugal plant will operate at a capacity factor of 75 to 85, depending on “the final configuration of the steam turbines for each tower.” When you compare that to information from the Energy Information Administration on other renewables, that’s a competitive number — comparable to geothermal energy and not quite as good as nuclear power, but well above other intermittent renewables like wind and solar photovoltaics.

Tamarugal and its brethren are expected to have a lifespan of more than 30 years, during which they will use no fossil fuels and require no replacement of molten salt. As an added benefit, when the proposed plants are eventually decommissioned, SolarReserve says the molten salt could be used to make “high-quality fertilizer.”