This huge rocket creates a fireball as it launches, and it’s designed that way | Techilink 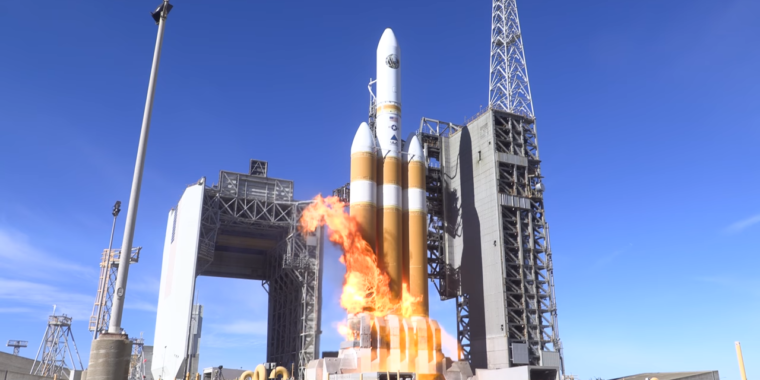 Anyone who saw the launch of United Launch Alliance’s Delta IV Heavy rocket on Saturday was treated to a close-up view of the launch. This vantage point, which shows the three-core rocket taking off under a blue sky, provided a clear view of a fireball engulfing the rocket during launch.

This can be quite distracting if you’ve never seen it before –uhh, is that rocket about to explode?— but in reality, it’s a byproduct of the RS-68 rocket engines that power each of the Delta IV Heavy launch vehicle’s three cores.

Developed in the 1990s by Rocketdyne, the replaceable RS-68 engine was designed to be less expensive and more powerful than the Space Shuttle’s reusable RS-25 main engines. Like the Shuttle’s engines, the RS-68 engine runs on a cryogenic fuel mixture of liquid hydrogen and liquid oxygen.

The fireball phenomenon manifests itself on the Delta IV Heavy rocket because of design differences between the RS-68 and Shuttle main engines and because the RS-68 fuel valve is open longer before the oxidizer begins to flow. Essentially, when the engine is started, only liquid hydrogen flows through the engine because it is less chemically active than oxygen.

This hydrogen flows out of the engine and because hydrogen is very light compared to ambient air, it rises on the outside of the rocket. When the liquid oxygen flow begins, the hydrogen is ignited into a fireball. This happens within the last five seconds of the countdown, creating the arresting footage of a fireball charring the orange foam exterior of the Delta IV Heavy missile.

This design trade was intentional and the exterior of the missile is configured to withstand the fireball. (Scott Manley has an excellent video on this topic that provides additional insight.)

Saturday’s launch went well, with the Delta IV Heavy rocket putting the classified NROL-71 payload into orbit for the National Reconnaissance Office. The company’s next launch is the WGS-10 mission, which will fly a geostationary communications satellite for the United States Air Force on a Delta IV rocket. Currently, the launch is scheduled for March 13 from Cape Canaveral Air Force Station, Florida.