This blue sky image of Pluto is absolutely stunning | Techilink 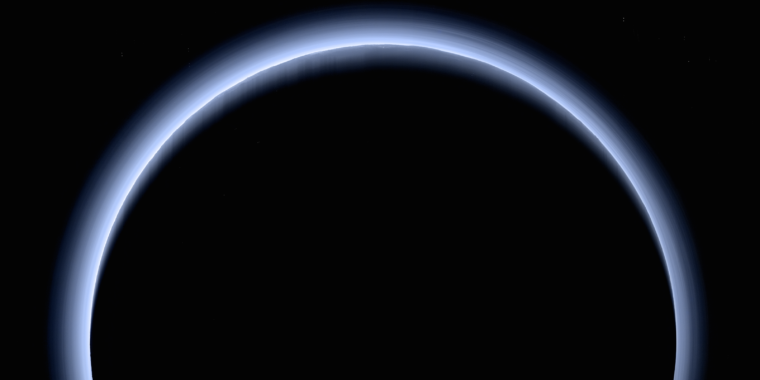 Although all the data from the New Horizons spacecraft captured during the 2015 flyby of Pluto has been downloaded to Earth for months, scientists are still trying to piece it all together. Now two scientists, Tod Lauer and Alex Parker, have processed some of the New Horizons data to produce a stunning look back at the dwarf planet.

This departure image is composed of a mosaic of six black-and-white images captured by New Horizons’ Long Range Reconnaissance Imager as the spacecraft moved away from Pluto. Color added from a lower resolution Ralph/Multispectral Visible Imaging Camera. At the time the images were taken, New Horizons was only about 200,000 km from Pluto, or about 3.5 hours after closest approach on July 14, 2015. The resolution of the stitched images is about 1 km per pixel.

In this composite photo, Pluto is backlit by the sun, almost as if the world is causing an annular solar eclipse for New Horizons. The image shows a beautiful blue “haze” that planetary scientists say is smog produced by sunlight interacting with methane and other molecules in Pluto’s atmosphere. These larger molecules scatter blue sunlight.

When expanded to full size, Pluto’s surface features become apparent at the terminator, and the twilight sun casts shadows around mountains. This is an amazing, evocative look at a world we barely knew two years ago.