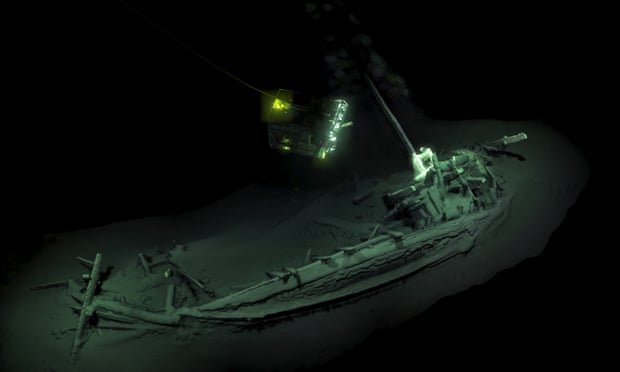 An archaeological research expedition called the Black Sea Maritime Archaeological Project discovered a shipwreck about 80 km (49.7 miles) from the Bulgarian city of Burgas. A pair of remotely operated vehicles (ROVs) created a 3D map of the site and took a sample of wood for radiocarbon dating, suggesting the ship was built about 2,400 years ago.

It looks surprisingly good for its age; the hull is still intact, the cargo is still piled up in the hold and the rowing benches on the deck look like they are ready for the crew to pick up an oars and get to work. Really old wrecks like this one usually just leave some amphorae, ballast stones or broken pottery on the seabed to tell the story. But the depths of the Black Sea have turned out to be a time capsule for ancient shipwrecks.

The depth of the Black Sea averages 1,253 m (4,111 ft), but the deepest places on the seabed are 2,212 m (7,257 ft) below the waves. There are many much deeper places in the world’s oceans, but the Black Sea is unique in that the deeper layers, which flow in from the bottom of the Mediterranean, do not mix with the oxygen-rich water of the surface, which flows from flowing into rivers. Most of the deep-sea floor in the Black Sea is completely anoxic, making it a poor environment for most microbial species that would normally break down the wood of a shipwreck. So not much happened to the ancient Greek merchant ship as it lay on its side in the anoxic darkness 2000 meters below the surface, even as two and a half millenniums of history passed in the world above.

Archaeologists with Black Sea MAP say the 23-meter-long ship was probably around 400 B.C. While archaeologists would normally turn to the contents of the remaining cargo — examining stamps or inscriptions on amphorae or other pottery, for example — to trace the ship back to at least one of the ports on its route, the ship’s incredible preservation presents a challenge in this case. With all the cargo still in the hold rather than scattered on the seabed, Black Sea MAP’s two ROVs couldn’t quite investigate.

And while no one has ever seen a Greek merchant ship of this time, its design is strikingly familiar to nautical archaeologists and historians. The wreck bears an unmistakable resemblance to a ship painted on a vase from around 480 BCE. Now on display in the British Museum, the so-called Siren Vase depicts a scene from Homer’s odyssey: Odysseus strained on the mast of his ship as it passed the Sirens’ house.

The overall shape of the painted hull is very similar to the real ship lying on the bottom, but the ancient artist was also surprisingly accurate about other details, such as the position of the mast closer to the bow, the rowing benches amidships and the shape of the hull. rudder at the stern. If the wind was favorable, the crew would have hoisted a square sail on the mast; the rest of the time oarsmen would have lined up on the benches and propelled the ship forward with large oars. It’s an interesting confirmation of a long-standing custom among archaeologists who study ancient ships: looking to ancient art for clues as to how the ships were designed and built.

In fact, many of the ideas we have about the early invention and design of rudders came from depictions of ships in ancient art. An intact 2,400-year-old rudder could help archaeologists answer more questions about the development of that technology. This shipwreck undoubtedly contains a wealth of other evidence about the design and construction of ancient ships, and the cargo probably contains more detailed information about ancient trade than any other ancient shipwreck site discovered to date. But it will be a challenge to get there.

The wreck is far too deep for divers to reach. This offers great protection against treasure hunters and vandals, but also makes archaeological excavation expensive and difficult. And any dig that plans to excavate artifacts will need plans, facilities and funding to ensure they are properly handled and stored, which is especially important given the large number of very well-preserved artifacts at this site. . Black Sea MAP currently has no funding for an excavation of the site, but will present the results at a conference in the UK this week. Along with the ancient Greek merchant ship, the three-year survey has 17e century Cossack raiders, an ancient Roman merchant ship and over 60 other shipwrecks.