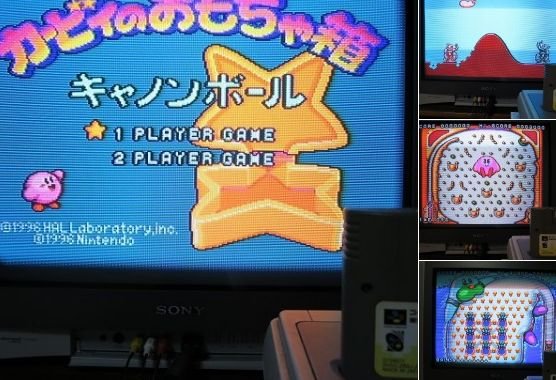 A group of dedicated game conservators have obtained a set of obscure Japanese Kirby games from the Super Famicom era to archive them for future generations. But the uncertain fate of such early games portends a much bigger problem for digital game preservation in the future.

Even die-hard Kirby fans would be forgiven for not knowing much about Kirby’s toy box, a collection of six minigames available only through Japan’s Satellaview, an early satellite distribution service for the Super Famicom (the Super NES in the West). However, with that system you could only download one game at a time to a special 8-megabit cartridge, and you could only download when that particular game was broadcast over the narrow satellite feed.

Existing copies of most Satellaview games are thus only available if they happen to be the last game downloaded to individual cartridges (Satellaview broadcasts ended in the late 1990s). While some of these games have been publicly dumped and kept as ROM files, many are in the hands of only Japanese collectors. Sometimes those people are reluctant to release the digital code on a large scale.

That’s why game historians were so intrigued when a Japanese auction popped up featuring four of the Kirby’s toy box mini games (round ball, cannonball, pachinkoand arrange ball) for sale on four individual Satellaview cartridges. As founder of the Video Game History Foundation Frank Cifaldi put it on twitter“finding 3 different ones from 1 seller is a miracle.”

Preservationists including Cifaldi and Matthew Callis sought donations to win the auctions and preserve the game data for future generations. Yesterday morning, the group announced it had won all four cartridges for a total of ¥85,500 (about $813.08, as reported by Kotaku). “Still missing most of Nintendo’s Satelliteview [sic] output, but at least we have most of the Kirby’s now,” as Cifaldi put it.

A growing problem with digital preservation

The shaky fate of these early digital downloads likely points to future problems we’ll face when it comes to the long-term preservation of modern games distributed exclusively as downloads. Last year, Sony shut down PlayStation Mobile, cutting off access to plenty of great Vita titles from smaller indie publishers. Xbox Live’s Indie Games program will be completely discontinued in 2017, leaving quite a few hidden gems without an online home. And Apple has started removing “problematic and abandoned” older games from the App Store, continuing a game removal process already initiated by many iOS game publishers themselves.

When Sony, Microsoft and Nintendo eventually shut down their PS3, Xbox 360 and Wii servers for good, hundreds of digital download games will only exist across various console hard drives. That already happens with games like PTKonami’s free cult horror classic that was unceremoniously pulled from PSN in 2015. That move led to a surge in pre-owned PS4 console prices with the game coincidentally stuck on their hard drives.

Of course, we’ll probably be able to find copies of many of the largest and most popular of these digitally-exclusive games for export to a more permanent and emulated archive format (a recent DMCA decision makes this whole process easier when it comes to authenticating authentication servers). mimic). But as servers go offline and games are scattered across countless different consoles, it will very quickly become very difficult to collect anything close to a complete understanding of today’s digital game market. As is the case with many early movies lost forever, we may not know what hidden game treasures were lost to history.