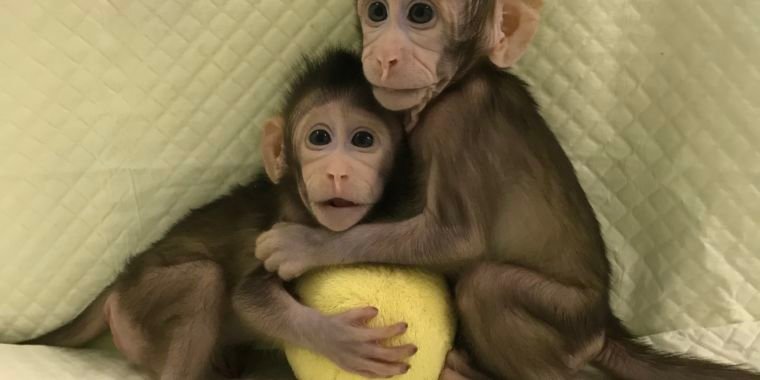 The twin long-tailed macaques are the first primates to be cloned using the same method that created the world’s most famous sheep in 1996 — a method called somatic cell nuclear transfer, or SCNT. The twins’ genetic blueprints were stolen from another monkey’s fetal cells. Researchers then put the DNA into egg cells that they had also stripped of their DNA-containing nuclei. With a splash of compounds that stimulate embryo development, the reprogrammed cells developed into healthy baby monkeys in surrogate mother monkeys. The two were born in China about seven weeks ago and are developing normally so far, researchers reported in the journal Wednesday Cell.

Although the general SCNT method is the same as the one used for Dolly, researchers have struggled for years to adapt it to work in primates. The procedure is delicate and required a lot of optimization – not to mention DNA swaps.

The researchers behind the adorable clones, led by Zhen Liu of the Chinese Academy of Sciences, first tried using DNA from adult monkey cells. They created 192 embryos in this way, 181 of which were implanted into 42 surrogates, resulting in 22 pregnant monkeys. But this resulted in the live birth of only two monkeys, both of which died within hours. Next, the researchers tried to use DNA from fetal tissue. They created 109 embryos, implanted 79 of them into 21 surrogates, leading to pregnancy in six of them. Two female monkeys, Zhong Zhong and Hua Hua, were the result.

The researchers attribute their success to new cell imaging methods, adjusting the right mix of reprogramming compounds and a lot of practice.

The resulting clones are twins because they are made using DNA from the same fetal tissue. Their names come from the Chinese word “Zhonghua”, which means “Chinese nation” or “Chinese people”.

The monkeys are a technical breakthrough for SCNT, but they are not the first cloned primates. That title goes to Tetra, a rhesus monkey who was born in 1999 and was created using a different cloning technique called “embryo cleavage.”

Still, Liu and colleagues hope the new cloning method can breathe new life into primate research and provide a unified genetic background that will enable the study and unraveling of genetic diseases. Research on monkeys and other primates has fallen out of favor with many scientists, especially in the US. The research is costly and can raise ethical dilemmas, and primates are not perfect models of human disease either. But the authors of the new study think their new clones may change things.

Images Courtesy of Qiang Sun, Mu-ming Poo, and the Chinese Academy of Sciences