There is no COVID vaccine reserve. Trump admin already sent it | Techilink 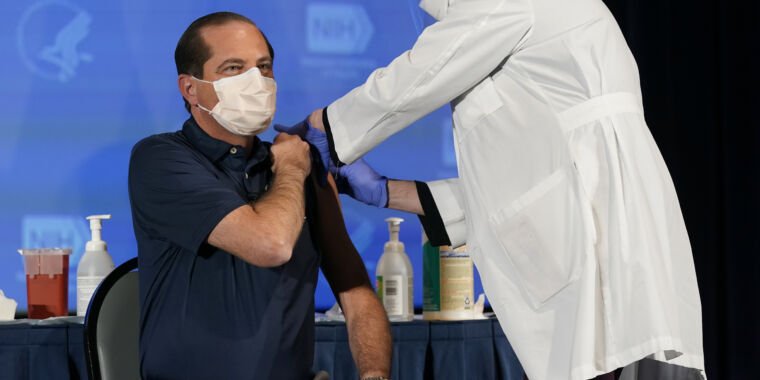 The Trump administration announced Tuesday, Jan. 12, that it would begin shipping reserved vaccine stocks, raising hopes states might double their vaccine stocks as they work to speed up the sluggish immunization campaign. But according to a report from The Washington Post, that promised vaccine supply doesn’t actually exist — it was already shipped — and the limited vaccine supply available to states will remain as it is.

The news has not only made state health officials angry and confused by the false promises, they are also struggling to resolve the distribution changes. In addition to claiming they would release the (nonexistent) stock, Trump administration officials told states to expand access to vaccines — allowing everyone over the age of 65 to be vaccinated and those under 65 who have a documented underlying health condition that makes them more vulnerable to COVID-19.

The comprehensive eligibility includes approximately 152 million people in the US. But government officials had previously estimated it wouldn’t be until the end of March before they’d have 200 million doses — enough to vaccinate just 100 million people — as STAT previously noted.

In just a few days since the government announced the changes, states have already seen chaos engulf vaccine distribution sites. Mississippi’s health department simply stopped taking vaccine appointments after a “monumental wave,” according to the Associated Press. Phone lines were jammed in Georgia, hospitals in South Carolina ran out of doses within hours, and counties in California begged for additional supplies for seniors.

There was no stock to release on Tuesday when the Secretary of Health and Human Services said at a news conference that “because we now have a steady rate of production, we can now ship all the doses that were kept in physical reserve.”

In a Twitter thread Friday morningOregon Gov. Kate Brown, she was “shocked and dismayed” to learn that the state “will not receive larger shipments of vaccines from the national stockpile next week because there is no federal reserve for doses.”

†[T]they have raised an expectation they could not live up to, with such dire consequences… This is a national-scale deception,” Governor Brown continued.

And there is more. Azar also said Tuesday that they would change the way they calculate each state’s allocation, taking into account the vaccination rate in each state. Fast states would be given extra doses, while slow states would be penalized with fewer doses. Azar said the change would take effect in two weeks. However, as the Post points out, Connecticut Gov. Ned Lamont on Thursday tweeted that federal officials had informed the state that it would receive another 50,000 doses next week “as a reward for being among the fastest states.”