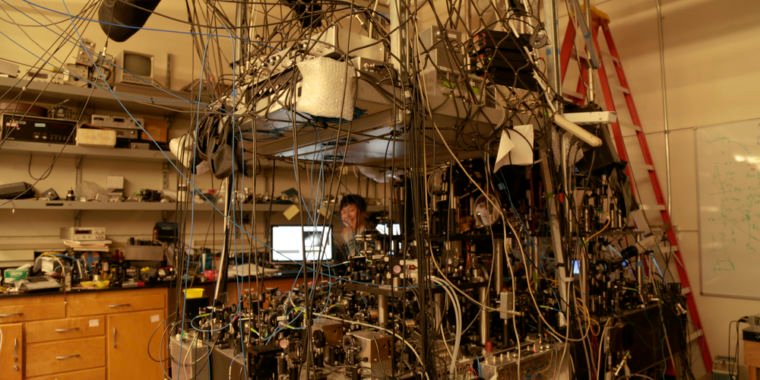 Measurements in physics are funny things. One would hope that attempts to quantify some of the fundamental properties of the Universe would follow a simple pattern: They would start with large error bars, but over time measurement technology improves and the error bars get smaller. Ideally, the value would then stay neatly within the previous error.

It almost never really works that way. In many cases, measurements cluster for a while before a new set jumps elsewhere, outside the error limits. And even as technology improves, some sets of error bars stubbornly refuse to overlap. A new paper coming out this week indicates that this is the case with the Fine Structure Constant, which describes the strength of the electromagnetic force. But rather than attributing it to the vagaries of measurement, the researchers suggest the difference could be real — and it tells us something about what physics could be beyond the Standard Model.

The fine structure constant is a measure of electromagnetic force, and that force occurs in a large number of phenomena. This means that there are many ways to make measurements that tell us something about the value of the fine structure constant. When it comes to highly accurate measurements, researchers have come up with two different ways to do it. The first is based on particle physics and direct measurements of the electron’s magnetic properties. The second was to study how atoms interact with light.

Over time, we’ve come up with better ways to measure both, and the error bars on our measurements have shrunk accordingly. And as the values ​​they produce have come closer, the error bars stubbornly refuse to overlap.

The data from the new paper is a report on a new measurement, this one using interactions between photons and atoms. The experiment itself is quite amazing. Like the LIGO gravitational wave detectors, it relies on interference between waves to register extremely subtle changes in location. However, unlike LIGO, the waves are not light; they are atoms. Taking advantage of the quantum nature of atoms, the researchers send clumps of them along different paths like waves and cause them to interfere with each other.

Lasers are used to steer the atoms along the paths, making the interference intensely sensitive to the interactions between the lasers’ photons and the atoms. And the strength of those interactions is, as we said, affected by the value of the Fine Structure Constant. The new measurements provide a threefold reduction in error compared to previous work, with an accuracy within ±2 × 10-10.

What if it’s real?

One case where this matters is a hypothetical particle called a dark photon. Dark photons would produce a difference in the fine structure constant measurements, but it would be in the opposite direction of the difference seen in these experiments. In other words, dark photons would make things worse. In contrast, another hypothetical particle, the dark axial vector boson, is not excluded by this new measurement.

That’s not to say that these experiments have definitively told us about these hypothetical extensions of the Standard Model. There is still a chance that the electron measurements are wrong, and there are a number of projects in the works that can say more about that possibility. But it certainly shows that those projects are worth pursuing, as a persistent difference across several independent measurements would start to look interesting.

And, as an aside, the researchers behind the new work note that it also provides a standardized means of measuring the absolute masses of the atoms, which could be used to provide a way to define the kilogram without having to depend on it. are made of chunks of metal. Bonus!