The Toys That Made Us: To Make a Great Toy Documentary, Embrace Jackie Chan |Techilink 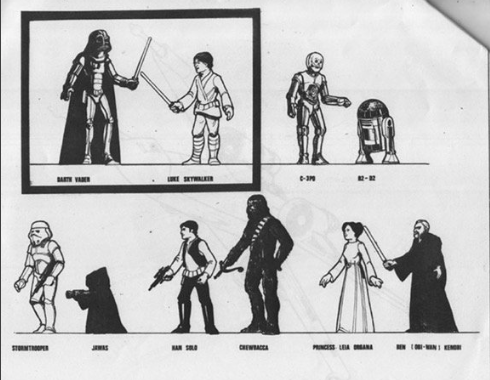 Brian Volk-Weiss has seen his share of documentaries. Heck, he’s even made a few, including a two-hour documentary that no one’s been to before (notably the History Channel’s 50 years of Star Trek). But when the longtime TV producer first approached Netflix with an idea close to his heart, it didn’t quite cut through the clutter.

Previously, the only work Volk-Weiss had done for the streaming company was comedy specials aimed at everyone from Jim Gaffigan to Tiffany Haddish. But he’d been on a pitch about an even older passion: his 30+ years collecting toys.

“For a long time I remained annoying [Netflix] about what they used to call ‘Brian’s Toy Show’,” he tells Ars. “In the end I was lucky that someone listened to me and took me seriously.”

If the History Channel connection didn’t give it away, Volk-Weiss loves a good backstory. “Brian’s Toy Show” started after some deep dives on the internet when he came away dissatisfied with the lack of information about the origins of the iconic toy story from Barbie to He-Man. But Netflix — contrary to the hands-off reputation the “network” has acquired with its high-profile originals — gave Volk-Weiss some honest feedback. That feedback ultimately saved “Brian’s Toy Show” and eventually shaped it into the wonderful, recently released docu-series The toys that made us.

“They said, ‘We trust you’re a toy nerd, but if you make a show just for people like you, 30 people will watch it,'” recalls Volk-Weiss. “‘We don’t give the green light to shows for 30 people.'”

So instead of a serious historical project that Ken Burns could love, Volk-Weiss embraced what he knew: comedy. And now that I’ve finally caught up with the four episodes that debuted this winter, I can state that this tweak honestly makes the whole thing.

To be clear, The toys that made us no shortage of information. Volk-Weiss and his team get practically every designer and exec you could wish for on camera, despite dealing with big brands like Hasbro, Kenner and Mattel. The first four episodes cover Barbie, He-Man, and GI Joe, while George Lucas ends up being the only slide that “so-and-so refused to appear.” Even if that disappointed Volk-Weiss, he’s quick to note how rare his access was and how interesting all the ghosts behind these toys turned out to be.

“Listen, meeting the dude who created the original Tie-Fighter model was a lot more exciting beforehand than meeting the woman who imagined what Barbie’s hands would look like,” Volk-Weiss says of access (and revealing Star Wars as his favorite toy obsession). “But after understanding what Barbie was, I’m now more interested in Barbie than in many things, but nothing will ever dethrone Star Wars.”

With that wealth of information, however, Volk-Weiss leaves room for his documentary to have a sense of humor. The He-Man episode doesn’t shy away from how much of the side characters — like villain Stinkor or hero Ram Man — seem like split-second ideas and name decisions. A GI Joe maker’s insistence that his toy is “an action figure, not a doll” turns into a running joke during that hour. And in hindsight, almost unthinkable ideas — from the Heinz Burger Blaster to the puberty-themed Growing Up Skipper — get proper recognition and roasting. You’ll chuckle regardless of fandom, but even diehards of a particular toy line seem to be walking away with new reveals.

“The biggest surprise for me – because the truth was the exact opposite of what I’ve believed all my life, and it felt like 98 percent of people my age felt the same way – we all grew up thinking that George Lucas 99 cent with every dollar of the toy,” says Volk-Weiss. “And I remember reading the field producers’ transcripts and hearing that George Lucas only got 2.5 percent. I said, ‘No, no, that’s wrong. That’s not true, you misunderstood him. That’s wrong.'”

(#NoSpoilers, but let’s just say Lucas didn’t make as lucrative a deal as Star Wars fans thought. This discovery certainly made headlines for the documentary.)

The toys that made us also (unintentionally, it turns out) it does something clever and derives its format from the TV spin-offs associated with the toys being analyzed. Each episode features an animated title sequence with a Saturday morning cartoonish jingle at the start. All the toys have real moments of conflict: He-Man execs trying to sell what is essentially marketing research by promising comics or TV on the spot; Barbie’s direct leadership is relentless and quick concepts to market to appropriate things like Jem or Bratz; etc. – through the middle. And all episodes end with those signature life lesson-esque post-scripts you’d see on GI Joe or He-Man. This is when The toys that made us envelops the lasting impact of a particular toy in the light of all the do-or-die moments being overcome.

“Actually, I learned the importance of a good ending from early Jackie Chan movies,” Volk-Weiss admits, citing how Chan would play funny outtakes over the credits of his movies. “Even if you sat there a little bored for an hour and a half, you watch these brilliant outtakes and leave the theater laughing and laughing about how great the movie was.”

(To bring this storytelling philosophy home: Volk-Weiss says hundreds and hundreds of hours went into each episode, but he knows he spent at least 11 hours in the editing room in the last five minutes of the Barbie episode, for example. )

The Toys that made us docu-series has four more episodes in the works, focusing on Hello Kitty, Transformers, LEGO, and Star Trek. They’ll be available on Netflix sometime in the first half of 2018 (Volk-Weiss was still in production and didn’t have a set release date to share when we spoke to Ars).

While no second season has yet been announced, Volk-Weiss is confident he has a ton of extra material if Netflix wants to move forward. He says the response from both collectors and non-collectors has been extremely positive, and a lot of the fans have contacted him about lots of other toys: Hot Wheels, Power Rangers, WWF figures.

“If I’m ever found dead in a ditch at a scam, ask the president of the My Little Pony fan club for an alibi,” he jokes. But as things move forward, there’s a definite first episode for every hypothetical season two.

“Turtles” [as in Teenage Mutant Ninja], is undoubtedly what people asked about the most,” says Volk-Weiss. “People asked me repeatedly, ‘Why would you do a Star Trek episode and not Turtles? I’m pretty sure if I watched the show I would wonder, but I did Star Trek because I love Star Trek I didn’t know if I was going to get more episodes and I wanted to do Star Trek.”

View image by Netflix / The Toys That Made Us