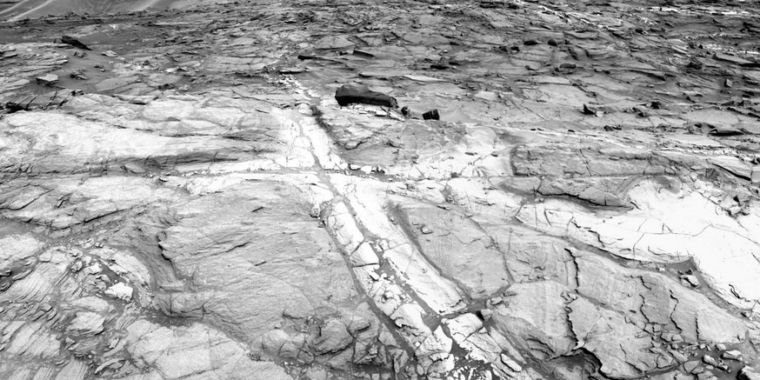 Gale Crater, the site explored by the Curiosity rover, was chosen as the landing site because its structure and composition suggested it could hold information about Mars’ past. As Curiosity climbed the slopes of the crater’s central summit, several discoveries have clearly shown that Mars had a watery past.

Now scientists have put all of these individual discoveries into a comprehensive overview of Gale Crater’s history. The photo shows that the crater was filled with water for hundreds of millions of years and was warm for much of that time. A separate document indicates that long after the crater was filled with blowing sand, groundwater continued to seep through the area.

Reading the layers of history

The new study draws on many individual analyzes of rock samples performed by Curiosity as it hit the slopes. Different instruments revealed the types of rocks and their chemical composition at specific locations on the slopes, creating a picture of the different layers of deposits.

Individually, these results are rather dry to say the least. “The Murray Formation can be divided into two groups (facies): one recognized by abundant iron-ferrous minerals (e.g., hematite) accompanied by phyllosilicates and another recognized by high concentrations of silica minerals accompanied by magnetite,” the paper says.

But together they tell an important story. Several minerals are more or less common under acidic or basic conditions; for example, something called jarosite, which is found in some deposits, forms under fairly acidic conditions. The presence of oxygen can be determined based on how common some forms of iron are. Sedimentary rocks composed of large grains would have formed near the lake shore in Gale Crater, while smaller particles travel farther and contribute to rocks formed in deeper waters.

The researchers also measured what’s called a “chemical change index,” which tracks how many rocks from elsewhere on Mars underwent chemical reactions before being incorporated into sedimentary rock. This gives a bit of an indication of the temperatures.

Taken together, the authors suggest that Gale crater lake went through different periods. While the first material to arrive as sediment was transported in a cold climate, it quickly warmed. During this warm period, it became more stratified, meaning it had several layers. Near the surface, UV light and atmospheric oxygen created an oxidizing environment. This oxidized some of the sulfur in the rocks, eventually creating enough sulfuric acid to lower the pH there. Deeper in the lake there was little oxygen and the pH remained closer to neutral.

Still later, some deposition of salt-rich deposits occurred. This may represent the period when Mars lost much of its atmosphere and its water evaporated.

Most importantly, the period when conditions were warm and watery lasted a long time. “Only a small part of the observed stratigraphy is expressed[es] geochemical properties consistent with a cold climate,” the authors conclude. They estimate that the environment meets the definition of habitable for a period of about 700 million years, ending at 3.1 billion years ago.

History did not end when the Gale crater dried up. The layers upon layers of sediment that had built up on the crater floor during this period were eventually eroded by the wind, exposing them on Mount Sharp for Curiosity to sample. This period has been long enough for the wind to blow sandy deposits into place which gradually solidified into rocks.

One of these deposits, visited by Curiosity, is the subject of independent work that shares characteristics with the one described above. Both papers describe how, in the later periods of Gale Crater’s evolution, some of the rocks formed from lake bottom sediments allowed groundwater to seep through their crevasses. This groundwater has left some telltale salts and minerals in these cracks, a process we are familiar with here on Earth.

The main finding in the second paper is that the deposition of minerals in groundwater did not only occur in rocks made from sediments in the bottom of a lake. Instead, it continued into rocks made of windblown sand and dust.

Why is this important? The bottom of the lake apparently disappeared more than three billion years ago. But then it took a long time for the wind to wear away most of that sediment, and even longer for it to deposit enough sand and dust to form an additional rock layer of windblown material. The new results suggest that all this had happened before groundwater seeped through the rocks and deposited additional minerals. That means that groundwater was present here long after the lake disappeared.

“Consequently,” the researchers conclude, “the timescale for potential habitability, at least in Gale’s subsurface, should be significantly extended.”

We don’t know what that time scale might be because we don’t have a date on the formation of the wind-blown rocks in Gale Crater. But the two sets of results indicate that Mars had the potential to host life for more than a billion years. And here on Earth, much less was needed for life to begin.