The road to bipedalism was not straight and narrow | Techilink 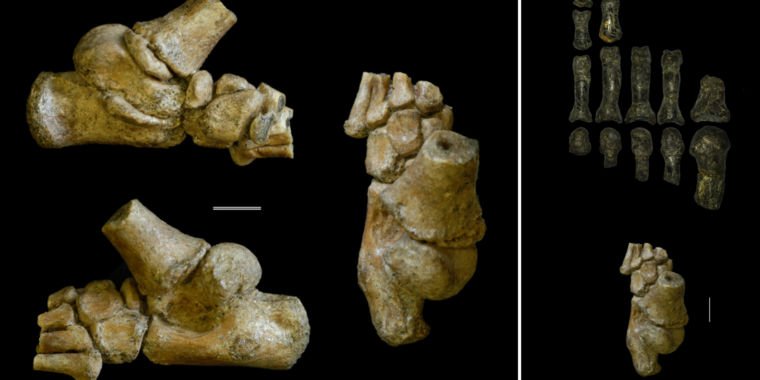 The four smaller toes of early hominids were adapted for bipedal walking about 4.4 million years ago, but the big toe remained better suited for grasping and climbing for several million years, until some time in the early evolution of our genus, Homo. That’s the conclusion of a new study by Stony Brook University anthropologist Peter Fernandez and colleagues, who studied the size and shape of the metatarsals (the bones of the metatarsal foot) in modern humans, fossil hominids and an assortment of monkeys and apes.

Spring in our step

Primate feet evolved primarily for grasping when climbing. That’s why chimpanzees have more flexible feet than humans and their big toes are opposite, like our thumbs. Humans — and our hominin predecessors — are the weird exceptions in the primate family tree, with the basic architecture of our feet adapted to support weight when walking.

Some of those adaptations, like those made by Fernandez and his colleagues, look quite subtle to anyone who isn’t a specialist in primate foot anatomy. Their study focused on how much the head of the metatarsal bone protrudes toward the top of the foot, protruding above the shaft of the bone like a dome, at the joint with the phalanx (one of the bones that make up the toes) at the base of the foot. the toe.

When walking, people overextend the joints of our forefoot, especially those between the metatarsals and the phalanges, every time we push one foot off the ground to take a step. That extension tightens the soft tissue on the bottom of the foot, turning the foot into “a relatively stiff, propulsive lever,” as Fernandez and his colleagues put it. And that high, rounded top at the head of the metatarsal bone gives the joint more freedom of movement, making that hyperextension more effective. In other words, that little protrusion at the ends of our metatarsals allows for a little more bounce in our step — and that gave our ancestors an evolutionary advantage.

A history in the toes

According to the oldest fossils with well-preserved foot bones, hominins had begun to develop this trait about 4.4 million years ago. that is Ardipithecus ramidus, which lived between 5.8 million and 4.4 million years ago. The second, third, and fourth toes all had arched metatarsal heads that resembled those of modern humans much more closely than modern monkeys. Fernandez and his colleagues did not examine the fifth, smallest toe in detail, because it plays much less of a role in walking than the others.

The second toe of Australopithecus afarensis, Homo floresiensis, gay nalediand a previous representative of the genus HomoEverything looked more like a human than a monkey. Interestingly, the third and fourth toe for the A. afarensis (a hominin species that lived between 3.9 million and 2.9 million years ago, best known from a specimen named Lucy) had fossils in the study fewer-dome-shaped metatarsals — more like modern monkeys than humans — although the third metatarsal had sustained some damage since burial, possibly skewing the measurements. the early Homo the metatarsal heads of the genus were domed like ours, and gay naledi (the exact relationship of which to modern humans is still unclear) also fell within the modern human measuring range.

But in Fernandez’s study, the third metatarsal bone of H. floresiensis (the small hominins, also known as the hobbit, which lived on Flores about 100,000 to 50,000 years ago) fell just outside the modern human range, but still closer to us than to modern apes. In the fourth toe, the metatarsal head was arched, like a modern human’s, but other aspects of the bone’s shape were more monkey-like. The lesson? Evolution is a complicated process, and our own evolutionary history is less linear and fragmented than you might think at first glance.

A weird mix of properties

The partial foot of an A. afarensis toddler found near Dikika, Ethiopia, suggests roughly the same conclusion. We already know, from other fossil evidence and from the well-preserved set of footprints near Laetoli, Kenya, that A. afarensis walked upright – similar to, though perhaps not exactly like, modern humans. But in a study published earlier this year, Dartmouth College anthropologist Jeremy DeSilva and colleagues reported that the Dikika child’s foot resembled that of a modern human in some ways, but more like that in others. of a monkey.

The length and shape of the Dikika child’s cuboid bone—the bone responsible for stiffening our midfoot and supporting the arch of the foot—suggests that A. afarensis had a stiffer pastern than monkeys. That would have been much better at supporting body weight when walking, but also much less flexible and mobile for gripping things when climbing. And A. afarensis had a more curved foot than monkeys, but would have been relatively flat-footed compared to modern humans.

A. afarensis also had a much more mobile big toe. It still protruded from the foot at an angle compared to the other toes, but not completely opposite like modern monkeys, based on the angle of the cuneiform (the bone to which the base of the metatarsal would attach). And the shape of the big toe remained decidedly more ape-like until much later in our lineage. In the study by Fernandez and his colleagues, A. afarensis and Australopithecus africanus (who lived 3.3 million to 2.1 million years ago) both had metatarsal bones that looked much more like modern gorillas than modern humans.

So while most of the rest of the foot was starting to adapt to walking, even as early as 4.4 million years ago, the big toe still looked more like a monkey’s: built for climbing. That suggests that even bipedal hominins still spent a lot of time in the trees for several million years.

“It shows that in human evolution the big toe stayed in an ape-like shape for longer, either because these critters didn’t walk like us humans, or because they still spent some of their time in the trees,” Fernandez told Ars. . . Climbing may have been a way of escaping predators or getting to food sources.

In modern humans, the second toe is more important to the walking mechanism than the other three little toes, although we also rely heavily on our big toe. But if earlier hominids had big toes for climbing, then species like A. afarensis used their smaller toes, perhaps especially the second, to provide the most push-off power when taking a step, allowing that second toe to do most of the work the big toe does now. And that means their gait may have been slightly different.

The footprints in Laetoli support that idea. “There seems to be less weight transfer and pushing the big toe off in those footprints, and we find the same thing in the bones. They fit together beautifully,” DeSilva explained. Ars Technica.

It seems there was no evolutionary push to align the big toe with the smaller four, where it could be used to push off the ground to walk, until the early members of the genus Homo came along – or else earlier hominids were still under pressure to maintain some ability to grab and climb with their feet.