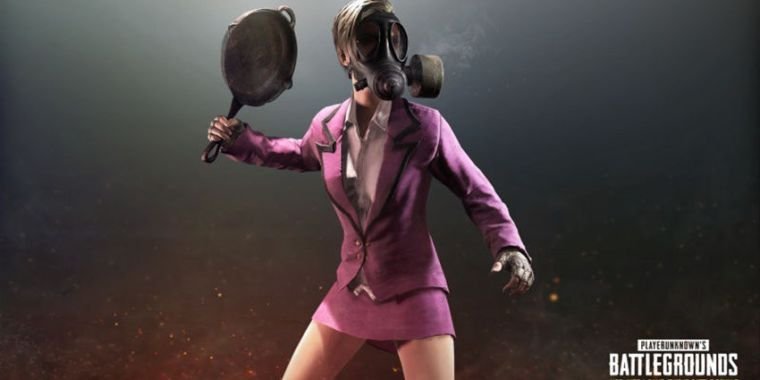 It’s no big surprise that the latest test server update for the insanely popular PlayerUnknown’s Battlegrounds on PC expands the game’s free and paid loot crate system. Despite the recent controversy over the practice, loot chests remain one of the most efficient ways to monetize a huge player base and encourage players to keep coming back for a regular drop of Skinner box rewards.

What’s surprising is how unusual some of these new cosmetic items are. In fact, the rarest free items in PUBGThe new crates will only appear once every 80 years for the average serious player, while the rarest paid items take an average of nearly $1,600 (and five years of dedicated playtime) to unlock.

We know this because PUBG is refreshingly candid about the chances of acquiring specific items in the game’s new Desperado and Biker loot crates, available now on the game’s test server. The fact that platforms like Apple’s App Store and countries like China now require such drop rates to be published may have something to do with that transparency, or it may just be a coincidence.

In any case, we now know that in Biker boxes (which can be opened without spending real money), three of the least common items each only appear 0.01 percent of the time (i.e. a 1 in 10,000 chance). In Desperado boxes (which require a $2.50 “key” purchase to unlock after being purchased with virtual currency), the rarest items only appear 0.16 percent of the time (i.e. in 1 of 625 crates ).

Those extreme rarities would already be a near-impossible grind for completionists who want to earn every item in the game themselves. But what makes the odds worse is: PUBG‘s hard limit of six crate purchases per week, according to the FAQ. That limit also applies to all types of crates; and each crate purchased has only a 40 percent chance of being primarily a Desperado or Biker crate (the remaining 20 percent of crates are older Wanderer and Survivor crates, each containing different cosmetic items).

That means if you buy the maximum six crates per week, you can expect to have an average of 2.4 Biker crates and 2.4 Desperado crates. So to buy the 10,000 Biker crates you would expect for a single black Sleeveless Biker jacket, it would take 4,166 weeks, or just under 80 years. For the paid Desperado crates, it would take about five years with maximized crate purchases and an average of $1,562.50 before your first Leopard Cloth Mask appeared.

(You’d also need to earn and spend a little over 89.5 million BP through gameplay to buy all those Biker crates, but that’s actually not unreasonable after 80 years of dedicated playing).

For context, in overwatch, 7.4 percent of all loot boxes contain one of the game’s rarest Legendary items. A legendary hearthstone card appears in one of every 20 packs, although the shinier golden Legendary cards only appear about once every 230 packs. In Lot 2rare exotic items appear about once in every eight to 10 boxes, according to multiple YouTube analyses.

Of course, the PUBG The numbers discussed above are just averages (and may change by the time these crates come off the test server). You could be insanely lucky and get one of these ultra-rare items in your very first crate. you could be crazy bad luck and don’t even get one of these rarest items after hundreds of years of crate purchases (we assume your descendants will continue your quest).

It is those extreme luck fluctuations that have led lawmakers and critics to compare these loot box systems to gambling. In addition, there is some evidence that PUBGThe developers adjust the extreme rarities of these loot box items to artificially increase the secondary market value of the items in those crates.

In an earlier version of the PUBG FAQ, the developers gave the following answer to the question “why are crates expensive?”

Indeed, a quick scan of the PUBG marketplace on Steam shows a lot of individual loot crate items going for hundreds of dollars (and that’s even if you throw out “out of print” items that were only available in time-limited crates). With the previous soft limit now switching to a hard limit of six crates per week, the value of the rarest items in these new crates will likely be at least as high.

yes, great that PUBG players can simply buy the cosmetic items they want a la carte from other players, rather than simply hoping to get lucky with their limited crate purchases. That said, the artificial restrictions on how many of those crates can even exist — and the extreme rarity of the least common items in those crates — means those aftermarket prices are much higher than, say, rare in-print prices. Magic the Gathering cards (which are printed in much higher volumes and are much more common, per pack).

Opening a virtual chest of these rarest items is like opening an envelope with hundred dollar bills inside, with only a small hurdle to place it on the Steam marketplace. With that real value built into the secondary market, each in-game crate becomes akin to a lottery scratch card.

Such a small chance of getting an extremely rare, extremely valuable item is likely to keep many PUBG players merrily play their way to the next loot chest. But with industry watchers and would-be regulators closely monitoring the loot crate ecosystem, artificially inflating the market with these hard-to-earn items could be a risky move.