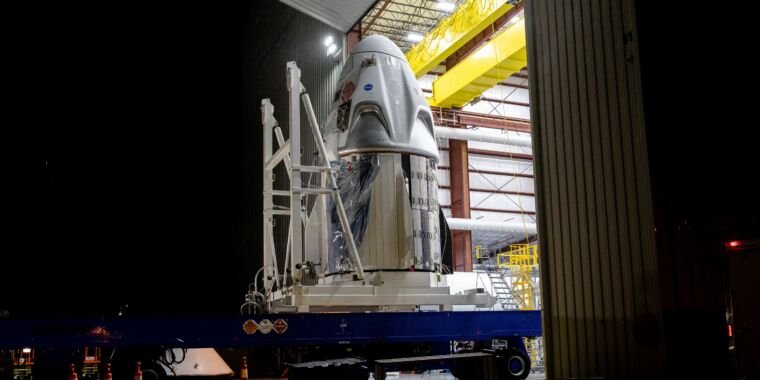 When NASA astronauts Doug Hurley and Bob Behnken blast off in a Crew Dragon spacecraft later this month, they won’t be launched into space alone. They will also usher in a potentially transformative era for the space agency.

No private company has ever put humans into orbit before. Therefore, the success of their mission, and others to come in the near future, could go a long way toward determining whether the promise of commercial spaceflight and cheaper access to space becomes the new reality.

This moment has been a long time coming. Nearly 15 years ago, NASA took a small gamble on the burgeoning commercial space industry when it sought to diversify its fleet to deliver cargo to the International Space Station. NASA, of course, had the space shuttle to carry supplies, but that obsolete vehicle wouldn’t fly forever. So the agency’s administrator at the time, Mike Griffin, pledged $500 million in seed money to develop new, privately built spacecraft.

Griffin may not have realized what he’d let go. The first small “Commercial Orbital Transportation Services” contracts awarded to SpaceX and Orbital Sciences have since expanded into other areas of space travel, growing in value from hundreds of millions of dollars to billions of dollars. NASA is now looking to private companies for not only delivering cargo into orbit, but with Crew Dragon for people as well. NASA also recently sought commercial services to send supplies to the moon and even land humans there. What started as a pebble thrown into a pond has turned into a wave.

Critics of this commercial approach certainly remain: It has disrupted the business models of traditional aerospace powers such as Boeing and Lockheed Martin, which have long benefited from lucrative cost-plus contracts. Also, some at NASA still don’t trust commercial providers, and they are especially wary of Elon Musk, the brash founder and chief engineer of SpaceX.

Still, it’s Musk’s company that provided NASA with a human-rated spacecraft in its hour of need, as Russia continues to raise prices for trips to space nearly a decade after the retirement of the space shuttle. And when you speak to the NASA engineers who have been working with SpaceX engineers for over a decade, they appreciate what the company has accomplished.

“This was a great relationship for both of us,” said Kathy Lueders, who manages the NASA program overseeing Crew Dragon. “It was worth seeing how our NASA teams learned from SpaceX and how the SpaceX teams from NASA learned. Together we have become stronger for this nation.”

Sometimes their cultures clashed. SpaceX relentlessly tries to innovate, cut costs and act quickly; the space agency is much less agile and much more risk averse. Still, the coming together of America’s space agency and its most daring space company has paid off and benefited both. NASA has given money and advice; SpaceX delivered the goods.

It was not an easy road to get here.

Even before Griffin offered funding for private spaceflights, he faced concerns about “commercial” space. Change is difficult, and some critics rightly believed that the private companies simply weren’t ready to replace NASA for mission-critical roles.

Until then, NASA engineers for major human spaceflight projects had decided exactly what they needed, selected a contractor to build it, and then followed each step with paperwork in triplicate. The contractor was reimbursed his costs for this, plus a generous compensation. If a vehicle went five years late and doubled its original budget, NASA was on its heels for cost overruns. This usually didn’t encourage on-time delivery, but in the end the government got what it wanted.

Griffin’s “commercial” space suggested a different way. Rather than starting with a detailed blueprint for what a contractor should build, NASA would determine the service they want. For “commercial freight”, NASA sought the delivery of a few tons of food, water, supplies and science experiments in orbit. But it didn’t tell the private companies how to do this. Instead, they had to design their own vehicles to meet this need. NASA would pay a fixed price for these services and no more. In return, the companies retained ownership of their spacecraft.

“In my own mind, I kind of thought of it as the scheme when you build an expensive custom home,” Griffin explained in 2013. “The contractor builds houses to live on, I don’t create the contractor’s business. He has to have a business before I consider letting him build a house for me. He builds his houses, and if I like them , I can buy a design that he offers. At various stages of completion, he gets money from me when he builds my house, but he doesn’t get all the money until he has delivered all the product.”

Griffin faced opposition to this within his own administration, even before awarding contracts to SpaceX and Orbital Sciences to begin designing and developing their cargo spacecraft. Frequently, senior officials at NASA came and went between the agency and major contractors. This allowed the old guard aerospace contractors, long accustomed to cost-plus contracts, to maintain some control over the agency’s direction.

Scott Horowitz’s career is illustrative. From 1996 to 2001, the United States Air Force Colonel and NASA astronaut conducted three shuttle missions and commanded a fourth, helping maintain the Hubble Space Telescope and resupply the space station. He left NASA in October 2004 to take a senior position at ATK, which built the rocket boosters for the space shuttle. Horowitz held this job for about a year before returning to NASA to head a new division overseeing the agency’s lunar exploration plans known as Constellation.

Back at NASA, Horowitz helped shape the strategy for the moon plan, including a new rocket called Ares I to launch crews into orbit. Ares I would use some of the same technology that powered the shuttle – a modified solid rocket booster from the shuttle would serve as the first stage. Accordingly, in April 2006, NASA awarded a $1.8 billion contract to Horowitz’s longtime company, ATK, to begin design work. Ares I was so closely associated with the former astronaut that it was soon nicknamed “Scotty Rocket.” A year after the award to ATK, Horowitz left NASA. Then, from 2008 to 2010, ATK paid him $100,000 in lobbying fees. (Horowitz was not available for comment).

Horowitz also emerged as one of the main critics of NASA’s efforts to commercialize aspects of spaceflight. An oral history interview Horowitz later gave to NASA gives a sense of the animosity he and some agency leaders had toward commercial space companies. The interviewer, Rebecca Wright, asked Horowitz about NASA’s claim that the commercial cargo program had helped it develop robust and cost-effective launch services for the space agency.

“That statement is complete and utterly pucky,” he replied.

Horowitz then claimed that the Ares I and SpaceX’s Falcon 9 rocket had similar costs, citing a 2009 test flight of an Ares I prototype. Interesting point – when we flew Ares IX, which flew right after I took off, (NASA) went back and did a total cost analysis – full cost accounting, government, all our waste and all our overhead. The number I saw was about $ 400 million to fly that flight,” he said. “The cost to get to the first Falcon 9 flight was about $400 million.”

This comparison between the Scotty Rocket and the Falcon 9 rocket is staggering, and not in a good way. But before we explain why, it’s vital to understand how NASA went from commercial cargo flights to the bigger step of allowing private companies to launch humans.