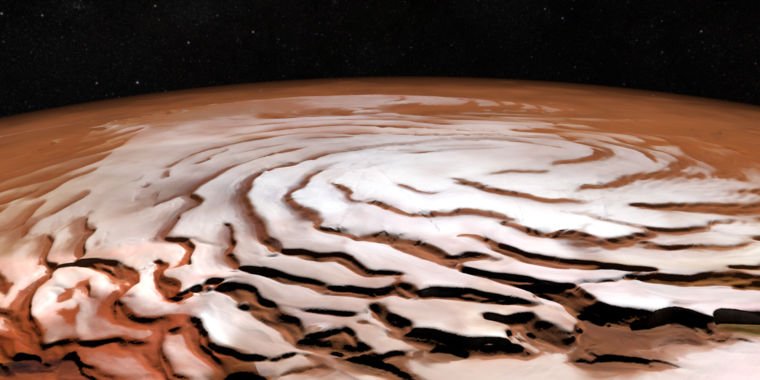 NASA and other space agencies have been observing the poles of Mars in great detail for more than five decades, starting with the Mariner 9 spacecraft. Since then, supplemented by ever-higher-resolution images and better data, scientists have successfully extracted details of the icy-covered poles. teased. And now we can finally come to a special conclusion: the north pole of Mars looks wonderful.

Seriously, the polar ice caps are pretty interesting features. And now, for the first time, we can see the North Pole in a “perspective,” a three-dimensional view that better shows their depth and detail. These gripping new images were created from elevation data and 32 orbital passes taken between 2004 and 2010 by the European Space Agency’s Mars Express spacecraft. The space agency released the mosaic earlier this month.

Unlike the pure water ice caps on Earth, the ice on the Mars caps consists partly of water and partly of carbon dioxide. When water warms, it naturally melts from ice to water, eventually becoming water vapor. Carbon dioxide is different: it sublimates directly from “dry ice” into a gas at a temperature of -78.5 degrees Celsius. And so during the Martian summer it is warm enough for the carbon dioxide at the poles to sublimate into the atmosphere before freezing again in the fall or winter.

This probably helps to explain why the poles look like a Cinnabon. Over time, a large number of sand dunes have formed at the poles, likely spiraling due to winds emanating from the elevated pole and flowing toward the equator, governed by the same Coriolis force that causes swirling hurricanes on Earth. As the dunes thaw in the spring, the subliming carbon dioxide reveals dark spots and highlights the Martian dunes.

One of its most dramatic features is the Chasma Boreale, which is about 500 km long, 100 km wide and 2 km deep. Scientists believe this canyon predates the existence of the modern polar ice sheet and likely deepened as new ice deposits grew around it.