The nearby system has 7 Earth-sized planets, several in the habitable zone | Techilink 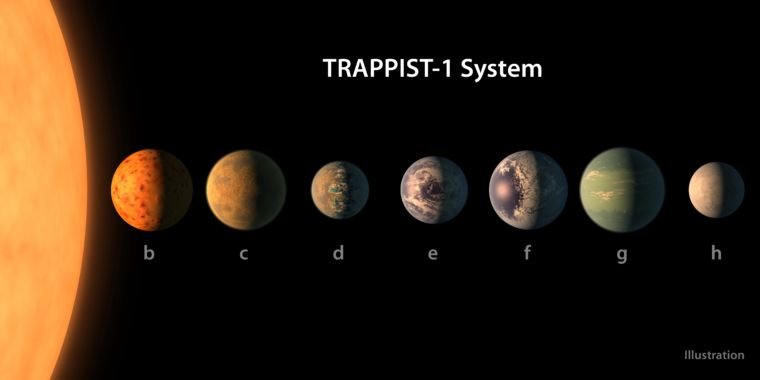 Less than a year ago, an international team of astronomers brought the star TRAPPIST-1 into the news. TRAPPIST-1 itself is inconspicuous and belongs to the class of small, dim stars known as “ultracool dwarfs.” Rather, it was the presence of three planets orbiting the star that made the news. While they likely orbit too close to support liquid water, TRAPPIST-1’s proximity to Earth — it’s less than 40 light-years away — makes detailed observations of all planetary atmospheres a realistic possibility.

But the orbit of the outer planet, TRAPPIST-1d, was not well defined by the initial observations, leading the discoverers to go back for some follow-up observations. They showed up four more planets, three of which are likely in their host star’s habitable zone. Since the orbit of the outer orbit is again uncertain, there will undoubtedly be more sightings in the making. Who knows what they will turn up?

TRAPPIST-1 takes its name from the telescope that first spotted the planets, the Transiting Planets and Planetesimals Small Telescope, though researcher Emmanuël Jehin noted, “Trappist is the name of a famous Belgian specialty beer, by the way.” It is a Belgian project that searches nearby dwarf stars for the presence of planets, as the faint star would make observations of planetary atmospheres much easier. The team’s first telescope is in Chile’s Atacama Desert, but has since added a second in Morocco.

Both telescopes were used to try to determine the orbit of TRAPPIST-1d, thought to be the outermost planet in the system. Other instruments took part in the observations, including the 3.8-metre UK InfraRed Telescope (UKIRT) in Hawaii, the 4-metre William Herschel and the 2-metre Liverpool Telescopes on La Palma, Spain, and the South African Astronomical telescope.
Observatory 1.0 meter telescope. Unfortunately, the additional data only confused things: “These light curves showed several transit-like signals of unknown origin that we could not relate to a single [orbital] period.”

So they brought in the big guns: NASA’s Spitzer Space Telescope. The initial results were so intriguing that Spitzer provided near-constant imaging of TRAPPIST-1 for 20 days. This imaging identified 34 individual transit events; combined with ground-based data, it was possible to clearly identify six orbiting planets. (Two of the transits previously thought to be TRAPPIST-1d turned out to be completely from different planets; another turned out to be three planets transiting at the same time.) A seventh was only observed once, so there will undoubtedly be more sightings follow; our catalog of planets around TRAPPIST-1 may not yet be complete.

The six inner planets, TRAPPIST-1b-g, are tightly packed around their host star, with orbital periods of 1.51, 2.42, 4.04, 6.06, 9.1 and 12.35 days. That means they also orbit each other close enough to exert gravitational influence on each other, which can speed up or slow down individual orbits. These create what are called transit timing variations, where a planet can appear in front of its host star a few minutes earlier or later than would be expected if it orbits alone.

These orbital interactions may have been key to stabilizing the TRAPPIST-1 system. The ratios of the time it takes neighboring planets to orbit the Earth are all integer ratios: 8/5, 5/3, 3/2, 3/2, and 4/3. Integer ratios allow for interactions that help prevent the kind of planetary chaos that can launch planets out of the exosolar system or spin them into the parent star. When we see such resonances, it is taken as a sign that the planets formed farther from their parent star and migrated inward due to friction from the disc of material they formed inside. Orbital resonances control this inward migration, producing densely packed systems like TRAPPIST-1.

However, the orbital interactions tell us much more than the history of the planets. Since the variations in transit timing depend on gravitational interactions and gravity depends on mass, the data provides some constraint on the masses of the planets. Although the current figures are not very exact, the precision will increase with further measurements. Most of them have masses similar to Earth’s, with a high of 1.4 times Earth’s and a low of 0.4 times. The amount of starlight blocked during their transit gives a measure of the size of the planets. Their radii range from 75 percent of Earth’s size to 113 percent.

By themselves, these numbers suggest Earth-like proportions. Combined, they give us the density, which refers to their composition. The inner six likely appear to be rocky, with the exception of planet f, which has a lower density that can reflect many volatiles — either a larger atmosphere or a more water-rich composition.

But an important question is what state that water is in: ice, liquid or vapour? All six well-characterized inner planets orbit the Sun at distances much shorter than Mercury’s. If TRAPPIST-1 were the sun, they’d all be baked. But it is only eight percent the mass of the sun and it burns hydrogen very slowly. As a result, there is a sharp decrease in the amount of radiation reaching the planets from TRAPPIST-1. Even the nearest gets just over four times the amount of light Earth receives; the furthest receives only 0.13 times. Or, as the authors put it, “planets c, d, and f have stellar irradiances very close to those of Venus, Earth, and Mars, respectively.”

As a result, each of the six inner planets is in what’s called the temperate zone, where the right conditions mean water can exist on the surface. However, climate models suggest that the three inner planets would enter a runaway greenhouse warming event. In contrast, TRAPPIST-1e, f and g could all have oceans on their surfaces. Of course, the planets are almost certainly tidally closed, with a single face facing their parent star. This can turn them into what’s called an “eyeball Earth” (see sidebar).

The other big factor to consider when it comes to habitability is the geology of these planets. Not only are some of them large enough to potentially have plate tectonics, but their proximity can cause gravitational stresses to heat their interiors through tidal forces, much as happens with Jupiter’s large moons. So there is a chance that these planets are heated from both the inside and the outside. Active geology can also have a major impact on the composition of a planet’s atmosphere.

We may not have to wait long to find out. Remember, TRAPPIST-1 was chosen for observations because it is a faint star that makes planetary observations easier. “Perhaps the most exciting thing here is that these seven planets are well suited for detailed atmospheric study,” said team member Michaël Gillon. Amaury Triaud, another researcher involved in the work, said initial observations are already underway. “We are trying to rule out that the planets have a large hydrogen envelope,” Triaud said on a press call. “This is to make sure the planets are indeed Earth-like.”

Once launched, the Webb Space Telescope will make these observations even easier, which made Triaud optimistic about future work. ‘If there’s life there,’ he said, ‘maybe [we’ll know] within ten years.”