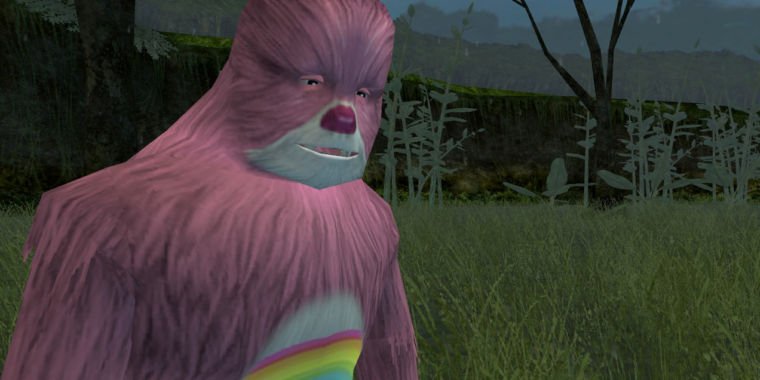 Released on December 6, 2004, Star Wars Knights of the Old Republic 2: The Sith Lords (KOTOR2) was the first game from the then newly formed Obsidian Entertainment. At the time, the new studio was a small operation with just seven experienced developers who had made the move from the recently closed Black Isle Studios, all ensconced in CEO Feargus Urquhart’s attic. But publisher LucasArts, who wants to profit from the success of the original KOTOR from the year before, it reportedly gave that worn-out new team just 14 to 16 months to make a sequel.

It’s no surprise that the final product had some issues.

Perhaps the most notable of these launch issues was the conclusion of the HK-50 factory mission. Specifically, that conclusion is simply nowhere to be found in the final game.

That means players can never discover the origin of KOTOR2‘s most recurring threat. Several files buried in the game’s code reveal content Obsidian created for KOTOR2‘s last planet – including dialogue and action sequences – that the developers just couldn’t get to work before launch.

Putting the pieces back together

When he first started mudding KOTOR2 more than ten years ago, Zbigniew “zbyl2” Staniewicz previously worked with the mod toolset for Never Winter Nights† That meant he already had experience with navigating KOTOR2s engine.

His first focus was finishing a mod to bring the slashed planet M4-78 back into the main game. That’s the droid planet where players would originally find Jedi Master Lonna Vash hiding from the Sith threat stalking Jedi across the galaxy.

Progress on restoring the M4-78 file was halted while Staniewicz waited for a writer to send scripts back. So he moved on to work on what would become the Restored Content Mod.

“Another group that made a restoration mod took years to release, and I knew I could have done what they were trying to do much faster,” he recalls. “I met this other man in the modding community [DarthStoney] that shared my feelings and we just went for it.”

Originally, Staniewicz and his team planned to fix one planet at a time and release them accordingly once completed. However, once the team was done with Nar Shaddaa, they decided to go ahead and release their work as one big mod that includes all the cut content.

As development progressed, Staniewicz started looking for more people to get the project across the finish line. A modder named Hassat Hunter was brought in to run beta testing and eventually started helping with development. And another modder named VarsityPuppet was brought in to troubleshoot that incomplete HK-50 Factory, composing the unfinished second half of the mission.

This kind of modding was far from a direct process. Even something as simple as changing an NPC’s location required entering the game, finding the character, writing down the coordinates, exiting the game, and entering and changing the coordinates in a modding tool, as Staniewicz described it. But that mod tool gives no indication of whether the process worked, so the modders had to restart the game and find the new location of the NPC to see if they succeeded.

“With what was left in the game files, the dialogue worked, but it didn’t end,” explains Staniewicz. So they put together the final sequences of the factory mission to fit the available dialogue of the factory and Malachor V.

After releasing a few versions of the RCM, Staniewicz dropped out of the project while the team was troubleshooting the game’s random loot system. However, due to the involvement of the other team members, progress never came to a halt. “Had me and Stoney been alone… we probably would have stopped much sooner,” Staniewicz said.

The Restored Content Mod entered open beta in 2009. It has over 400,000 subscribers on the Steam Workshop.

put on a disguise

Not everything KOTOR2 mods are so complicated. Effix, which has posted more than 60 mods on Steam since 2010, focuses instead on more cosmetic changes. That could mean anything from changing a companion’s hair color to turning Hanharr, a dark specific Wookiee companion, into a pink “care bear”.

“There was someone who suggested it, and a few others were also on board with the idea or daring me to do it” [make the Care Bear mod]’ says Effix. “I don’t think they expected me to make it work, but for me it was extra fun to turn that idea into a real mod.”

Other work by Effix includes mods that allow the player to replace his standard human head with alien variants such as the ancient Rakatan or dark Darth Malak. “The technical term [for these mods] is ‘disguise’ because that is the name of the [in-game] item property that allows you to take on a different look,” said Effix. “A lot of things from KOTOR [like disguises] were left behind KOTOR2‘s files, even though they may not appear in the game.”

Most of Effix’s work, he said, is done by Fred Tetra’s “KOTOR Tool,” a simple utility for editing modules, images, wireframes, character outcomes, dialogues and in-game items. By focusing on these elements, Effix has maintained its enthusiasm for modding the game, he said, as well as focusing on projects that are “fairly bite-sized” compared to others. “I like doing retextures because I like giving something a new look, and for me it’s pretty easy. I don’t like more complex things like scripts, adding new areas, new 3D models and animations.”

“Making mods for a game that you really like is a lot of fun, so that’s my motivation,” he added. “It’s also satisfying to get positive feedback from people who use your mods and are also passionate about the same game. For me it is a fun and relaxing hobby. It’s cool to make things and see your creation in a Star Wars game, and I get a lot of positive feedback from the community.”