The Milky Way is not only pulled, but also ‘pushed’ by a void | Techilink 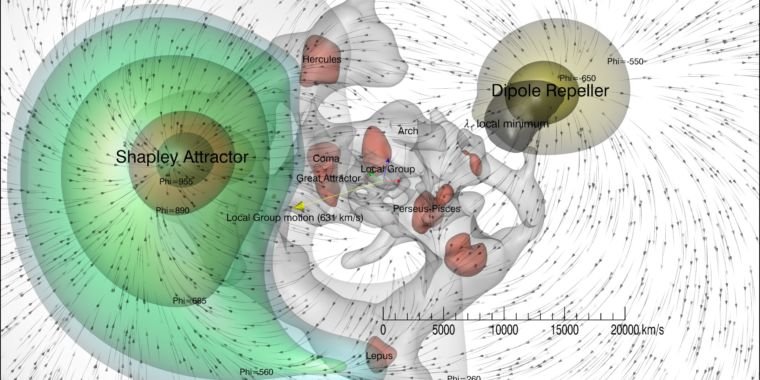 You may not notice it, but our Milky Way galaxy is hurtling along at a speed of 630 kilometers (~391 miles) per second. That speed is often attributed to the influence of a single gravitational source. But in a new study, a group of researchers has discovered that the motions of the Local Group — the cluster of galaxies that the Milky Way is a part of — are driven by two primary sources: the previously known and incredibly massive Shapley Supercluster and a newly discovered repeller, which the researchers call the Dipole Repeller.

Shapley’s contribution was already known, but that of the Dipole Repeller had not been recognized prior to this study.

The researchers mapped the motions of many galaxies in the nearby universe in a 3D model, using data from the Cosmicflows-2 database. As the Universe is expanding, most galaxies are moving away from us, causing a redshift in the light they emit. But since the researchers were more interested in the other influences on a galaxy’s motion, they simply subtracted the contribution from the expansion. The resulting graph shows what the motions of galaxies would look like if space didn’t expand.

The galaxies in that chart all follow different paths – some passing through the Great Attractor in the center of the image, others curving around the periphery, and so on. They all seemed to have a clear destination: the Shapley Supercluster. But they also seem to have a clear starting point: the Dipole Repeller. When the researchers traced the paths of the galaxies backward, they all originated there. It looks a lot like there is something repelling the galaxies, as if the Repeller and Shapley formed the negative and positive ends of an electric dipole and charges were propelled from one to the other.

That’s not what actually happens. Gravity is the dominant force acting on a galaxy, and gravity, unlike electricity, cannot repel – it is merely an attractive force. So what’s going on?

The true identity of the Dipole Repeller is probably nothing. It is actually a void with much less mass than the surrounding space. This resembles a repulsor because nearby space has a much denser concentration of matter, creating a gravitational gradient between the two. The low-density void is the only direction from which there is no force pulling on the galaxy, or at least significantly less force than from any other direction.

The low-density space was discovered a decade ago, and it was suggested at the time that it could be a major contributing factor to the Local Group’s movements. But it was difficult to determine whether that was correct, since such low-density spaces are difficult to map precisely because they emit so little light.

The main conclusion of the study is that the Repeller has just as much influence as the Attractor, if not more, on the movements of nearby galaxies. Future studies could map the void more precisely, determine how much mass it contains, and confirm its association with the Dipole Repeller. The researchers have now made a video of their model with an explanation.

Frame image from the Hebrew University of Jerusalem