The material science of building a light sail to take us to Alpha Centauri. to bring | Techilink 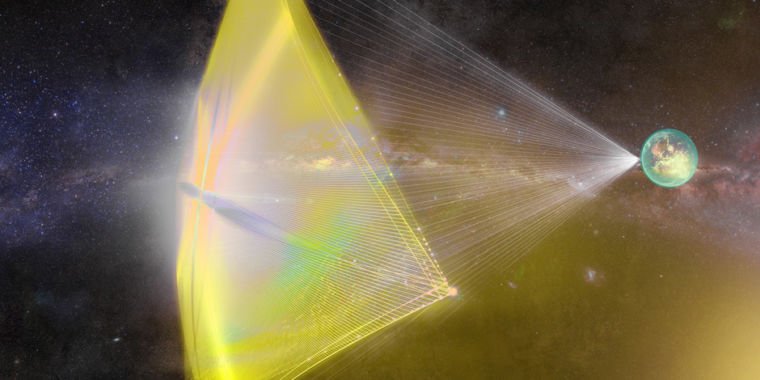 It’s been about two years since Yuri Milner announced his boldest piece of science-focused philanthropy: Breakthrough Starshot, an effort to ship hardware to Alpha Centauri by the middle of the century. While the technology involved is a reasonable extrapolation of things we already know how to make, creating materials and technology that create that extrapolation is a serious challenge. So much of Breakthrough Starshot’s early funding has been spent figuring out what improvements to current technology are needed.

Perhaps the least well-understood developments we need come in the form of the light sail that will be needed to accelerate the starbursts to 20 percent the speed of light. We’ve only put two examples of light-powered sails in space, and they don’t come close to what is needed for Breakthrough Starshot. So in this week’s edition of Natural materialsa team of Caltech scientists is looking at what we would need to do to go from those examples to something that can travel interstellar.

The size of the problem

One of our best examples of a light sail was launched into space on the IKAROS craft, which was capable of accelerating to speeds of 400 meters per second. Starshot’s breakthrough spacecraft are expected to travel in the region of 60,000 kilometers per second and accelerate to that speed before leaving the solar system. So the amount we can learn from the existing craft is quite limited.

Those speeds – and the acceleration needed to get there – give a rough idea of ​​the size of the sail we’ll need, and the dimensions are quite impressive: 10 square meters but weighing less than a gram. That, the Caltech researchers calculate, means that the sail must be on average 100 atoms thick and still be able to transfer the acceleration force. Graphene is one of the strongest materials we know of, so it could work for breakthrough, but it’s also transparent at some wavelengths and absorbs at many others, so it can only act as a structural support.

There’s good news in that 100-atom-thick figure. The sail will encounter a variety of energetic particles in the interplanetary and interstellar medium, but most of these will be hydrogen and helium. And based on how deeply those particles penetrate other materials, there’s a good chance that hydrogen and helium will pass right through the solar sail. Dust particles are a bigger problem, but the authors estimate that they would destroy about 0.1 percent of the total sail area, with most of it occurring after acceleration is complete.

So what remains for us is the challenge of building the material that reflects the light from the solar sail. Or, as we shall see, the collection of interlocking challenges.

Light sails work because photons carry momentum, and they will transfer some of that to reflective surfaces as they bounce off. Starshot suggests synchronizing a large collection of lasers on Earth and aiming them at the light sail to speed it up quickly. That means the lasers must have a wavelength that can pass through the atmosphere without being absorbed or scattered; the authors suggest that the near infrared (with a wavelength of one or two micrometers) would be a good choice.

So the sail surface should reflect in those wavelengths. Gold and silver, among others, are already known for this and can be made into thin films. Problem solved, right?

Not exactly. As the authors note, managing light is not just a matter of tackling the problem of light reflection; it is a series of interrelated problems. Even if we could make thin films of these metals a few atoms thick on a sail, the relatively high weight per atom means we can easily blow past the weight limit of the sail. And, even more problematic, although these metals reflect most of the light in these wavelengths, much of what is not reflected is absorbed. With the intensity of the lasers involved in accelerating the craft, the heat from those absorbed photons would quickly destroy the sail.

Instead, the authors look at partially reflective materials with a high refractive index and low absorption. The high refraction makes it possible to create light-manipulating structures on the surface of the sail that contribute to the reflectivity. The researchers consider a handful of semiconducting materials that fit, some of them because their constituent atoms weigh too much (such as tin). The reflection/refraction of these materials must also cover a wide range of wavelengths, as once the craft moves fast enough, the incoming photons will be shifted into the red.

In the end, nothing meets the researchers’ full list of wishes. So they settled on two of the three and focused on silicon, diamond, and molybdenum disulfide.

However, there are other problems. These materials also need to efficiently radiate any heat they get into – technically they need to have high emissivity. This will, of course, cause problems with, as the researchers put it, “melting or other thermal failure modes.” But even below that it can cause problems. As silicon heats up, the amount of light it absorbs will increase, raising the prospect of a thermal runaway.

At this point, the team suggests we don’t even have good measurements of some of the material properties we need to fully evaluate some of these details. We have bulk material dimensions, but not thin films. So there is a whole area of ​​research that needs to be developed before we fully understand the tradeoffs we face.

While materials like silicon don’t reflect much of the light, they have a high refractive index, meaning they will bend a lot of it. If you structure the surfaces of these materials at scales similar to the wavelength of the incident light, they may be able to bend it in a way that is functionally equivalent to reflecting it. So the researchers also considered different designs for the surface.

And here they found another trade-off. While the best light reflection (near perfect reflection) came with a multi-layered 3D structure, which added significantly to the weight. In contrast, they were unable to reflect that much light using a pattern of holes drilled into the silicon, but this significantly reduced the weight. When they compared the gearing of the two options, they were able to get a noticeably greater gear from the less efficient solution purely because of the weight.

In addition to the challenges they face, the sail itself will not be a simple flat sail. That’s because even the smallest surface imperfections or the tilt of a plate can send it in unexpected directions during acceleration. Instead, current thinking focuses on a spherical sail and a donut-shaped light field, which could self-correct for small perturbations in the sail. However, that design probably isn’t conducive to making the tarp out of single-sheet material (assuming we could figure out how to grow them on a 10-square-foot scale). So we will have to bond many individual panels of these materials together, something we don’t know at the moment.

In general, the paper gives a good overview of what we need to know to choose materials for a Breakthrough light sail. But it also emphasizes that this is not a matter of finding the only perfect solution; instead, it’s about managing multiple, sometimes conflicting, priorities and developing a solution that partially fulfills all of them. “We argue that successful light sail design requires synergistic engineering,” the authors conclude, “simultaneous optimization and consideration of all parameters described above.”