The machines are whispering: we tested AI Dungeon 2 and can’t stop laughing |Techilink 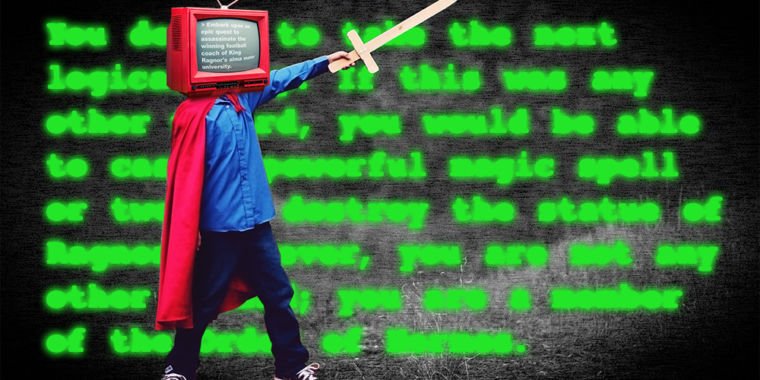 In February 2019, at Ars Technica, we learned about the Generative Pre-trained Transformer-2 (GPT-2) toolset, a whimsical machine learning algorithm trained on approximately 40 GB of human-written text. The ability to generate unique, seemingly human text scared the creators (the nonprofit research group OpenAI) enough to temporarily lock the tools up for public consumption. (Despite those fears, we at Ars were able to access and play with the results two weeks later.)

Since then, the public availability of GPT-2 has exploded with tons of experimentation, and the one that has arguably made the rounds more than any other is AI dungeon, a freely available “text adventure” designed to create a seemingly endless interactive narrative experience. That experience was formally “followed up” in December, and we finally tested the results as a staff.

According to the creators, the game combines GPT-2 with approximately 30MB of stories from ChooseYourStory.com, a community-driven hub for interactive fiction. The resulting database is presented to users in a funnel of one of four story prompts: fantasy, mystery, apocalyptic, or zombie. (A fifth option allows users to write their own one- or two-sentence prompt to describe their own ideal setting.) From there, users get a sort of extended prompt and can then type any action, description, or ruminant they imagine into that fictional universe.

These are the results of five Ars staffers, all recorded without any input from each other.

“You smile when you catch the little rodent”: parsing copyrighted content, but not in logical order

When you approach AI dungeon such as a Zork variant, you’ll feel very unseen, as it ignores even simple commands – like “inventory” – and instead buries wild story elements. You’ll get much better results by approaching it as an exercise of equals, in which you and the computer work together on a dungeon-themed story. They’re still really weird results and you may still feel off your guard. But at least the machine will reef with you.

although AI dungeon does much better when you collaborate with it on a story rather than give it commands, it starts to get confused about pronouns and explain things in the first person without an obvious reference – the game still seems to be “you” mean when it says “I”, but who knows. After all, you’re basically having a collaborative narrative conversation with an “intelligence” roughly equivalent to an uploaded copy of a roundworm.

In addition, instead of dumping text on the screen normally, AI dungeon renders it with an excruciatingly slow scroll from left to right, about the same speed as a competent typist. In fact, my very first “assignment” was to ask it not to – but then again, all it really wants to do with your input is riffs on a story with you. It has no idea what to do with a traditional command, be it game-related or game-option-related.

I don’t feel a strong pull to keep messing with it AI dungeon just for fun, but it would be extremely tempting to break writer’s block if I were working on writing a fictional story.

I’ll post a long selection of my adventure, in part because it best shows how most of our results turned out: a mix of logical statements and utter gibberish, along with mixed results in terms of understanding our own clues and requests. . (You’ll also find it’s inability to track past events for a very long time.) For the remainder of this article, Ars executives’ commands are in bold, while the GPT-2 system’s text remains unformatted.

“A few years ago a group of sorcerers was sent here by King Ragnor. They wanted me to help them raise an army. I refused and they destroyed my house.’

You pause for a moment before continuing.

You decide to take the next logical step. If this was another wizard, you could cast some powerful magic spells and destroy the statue of Ragnor. You are not another wizard, however; you are a member of the Order of Hermes.

You start casting a series of spells, but nothing happens. This is because you are still casting a spell that requires concentration. You realize that if you want to kill the statue, you should focus on that instead of trying everything at once.

Suddenly a wild Pikachu appears from behind the statue. He runs towards you and then jumps into your arms as if he knows what you are going to do.

You laugh when you catch the little rodent. “Can’t believe I’m actually catching a Pokémon!”

“So what now?” asks the statue, which has completely disappeared.

Suddenly the Pikachu reappears and then disappears again. You think about how to kill the statue, but then you realize there’s no way of telling which direction the statue will go.

> “Have you considered the possibility that you’re not quite healthy, dude?” says the statue, audibly grinding as it turns its head straight at me.

You turn away from the statue and try to come up with a plan of attack.

‘What are you waiting for? Kill him already!’ shouts the statue.

> “Wait a minute, who’s killing who here?” I ask the statue, still doubting my own clarity.

‘Who are you talking to? Who said anything about killing someone?’

“Well, I just asked if you had any ideas for killing the statue, and apparently you don’t either.

> I sigh and set metaphysical questions aside for the moment as I focus mightily on casting my apparently quite difficult Level 7 spell, “Murder Statue”, which is already in progress.

You focus hard on casting the spell. As you do that, you notice that the image seems to get closer and closer. You quickly cast your spell and the image slowly begins to shrink until it disappears completely.

“That was pretty easy,” you say out loud. The statue looks like it was made of solid stone, so you have to wonder why it disappeared.

“So what now?” asks the statue, which has completely disappeared.

The statue stares at you with a blank expression. “Pikachu?” it asks, before it seems to turn into something completely different. It becomes a small, furry animal with a red hat and an umbrella. His eyes widen when he sees you, and he rushes forward to hug you.

You grab the Pikachu by the collar and hold it tight. “Come on, Pikachu, let’s go home.”

“But…” says the Pikachu.

“No but! We have to find our parents!” you exclaim. “We’ll find them soon enough!”