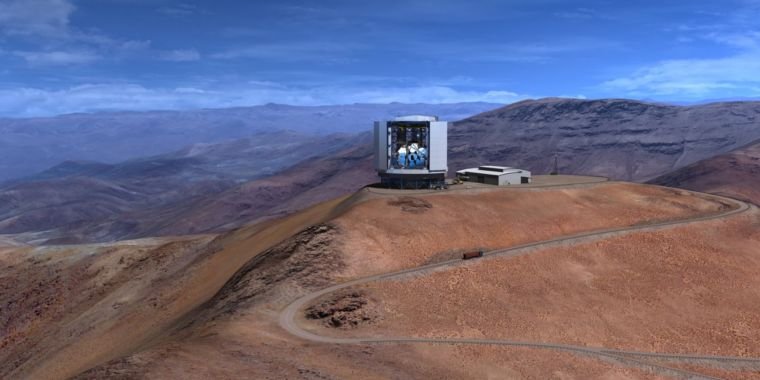 It’s been a long road for the planners of the Giant Magellan Telescope, which will become the world’s largest telescope – if completed on schedule. Casting of the first of seven mirrors, each formed from about 20 tons of borosilicate glass made from Florida sand, began way back in 2005. The project finally seems to be closing in as the team ramps up fundraising and construction efforts.

The telescope’s organizers are gearing up for the fundraising efforts needed to bring the project to fruition and have hired a new president with significant administrative experience: Robert N. Shelton, former president of the University of Arizona and provost and executive vice president Chancellor of the University of North Carolina at Chapel Hill. “Anyone who has been president and provost understands the importance of fundraising,” Shelton said in an interview with Ars.

Over the past 15 years, the project to build a 24.5-meter telescope in Chile’s Atacama Desert has raised just over half of the project’s $1.05 billion. The telescope would be about two and a half times larger than any existing optical telescope. Raising the rest won’t be easy for a telescope, Shelton acknowledged. “For grateful alumni or hospital patients, that’s a smaller number in terms of a fundraising campaign,” he said. “But if you’re an observatory, it’s a little bit more challenging.”

Meanwhile, the group continued to build at the high desert site. In late 2015, bulldozers began leveling a road to the site at 8,255 feet (2,516 meters), and three buildings have been built in the past year that will provide housing for workers and eventually astronomers. By the end of this year, Shelton said, the excavation will begin building a foundation for the massive telescope itself, and the organization will issue “requests for proposals” for mirror mounts that will support each of the 8.4-foot-long mirrors. .

According to the current timeline, construction of a partial four-mirror version of the telescope (which will have seven mirrors upon completion) should be completed in 2023. Four of the mirrors are cast and are in various states of polish. But the overall timeline remains ambitious and dependent on funding. Ten years ago, the group intended to have the telescope completed in 2016.

Time is of the essence, as two other projects are also in various stages of building a super-sized optical telescope: the Thirty Meter Telescope led by California institutions and supported by the Gordon and Betty Moore Foundation, and a European telescope consortium with an even more ambitious 39-meter instrument. The Thirty Meter Telescope project has become controversial as some Native Hawaiians oppose the instrument’s construction atop Mauna Kea on Hawaii’s Big Island. The European project also faces significant technical difficulties associated with assembling such a large instrument.