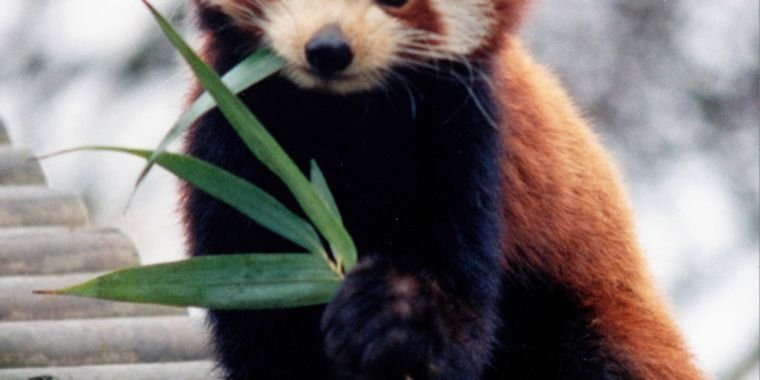 Even though bats and birds didn’t evolve from a common ancestor, they both have wings. This phenomenon, called convergent evolution, causes species in similar ecological niches to evolve similar adaptations – not because they are closely related, but because they face the same evolutionary problems.

That lifestyle choice apparently left similar marks on their genomes, as a team of researchers discovered when they mapped the genome of the red panda.

Both giant pandas and red pandas have adapted to a highly specialized bamboo diet, which means major adjustments to their digestive systems. Bamboo is a tough, fibrous food that is difficult to digest. Pandas, with their digestive systems inherited from carnivores, have had to undergo some major changes to absorb the scarce nutrition available in their chosen foods. Pandas also share a strange and fascinating adaptation to their paws: They both have a “pseudohumb,” with a bone that sticks out at the paw and makes it easier to hold a bamboo stick.

The researchers were interested in seeing if they could find similarities in the two genomes that could shed light on how these similarities evolved. To do this, they sequenced the genome of the red panda, which is starting to sound simple these days, but is still a labor-intensive task. As sequencing methods got better and better, they also cleaned up the already sequenced panda genome a bit, to make sure both were of comparable quality.

They then compared the two genomes with the published genomes of six other species: the polar bear, ferret, dog, tiger, human and mouse. This allowed them to look for unexpected similarities in the panda genomes that could indicate convergent evolution. They identified 70 genes that appeared to be likely culprits.

Drilling into the details of these 70 genes yielded some interesting results. For example, two of the genes, called DYNC2H1 and PCNT, they are known to be involved in limb development. If something goes wrong in mice or humans, the result is abnormal skeletal growth. It seems likely, the authors write, that these genes “contribute to the development of pseudothumb in both pandas.”

Several other genes on the list likely aid in the pandas’ digestion. Some genes are known to be involved in protein digestion, while others aid in the absorption of vitamins A and B12, which are scarce in bamboo. And in both species the umami taste receptor gene TAS1R1 is “pseudonized” – it can no longer produce a functional protein. “Umami is a critical sense of taste for carnivorous animals,” the authors write, and the loss of function “may be an evolutionary response to the diet shift from carnivores and omnivores to herbivores.”

It is quite easy to see convergent evolution at the level of observable features. We’ve known for centuries that bats and dolphins use echolocation, and we’ve been able to observe how different species find the same evolutionary solutions to things like certain diets or threats. But while it’s a widely observed phenomenon, it’s still something we’re just beginning to see at the genome level.

This is a fascinating look under the hood of convergent evolution, but much more research needs to be done to confirm that the changes in these genes actually affect the pandas’ ability to function as vegetarians.