The future of quantum computing is almost half way – are we ready? | Techilink 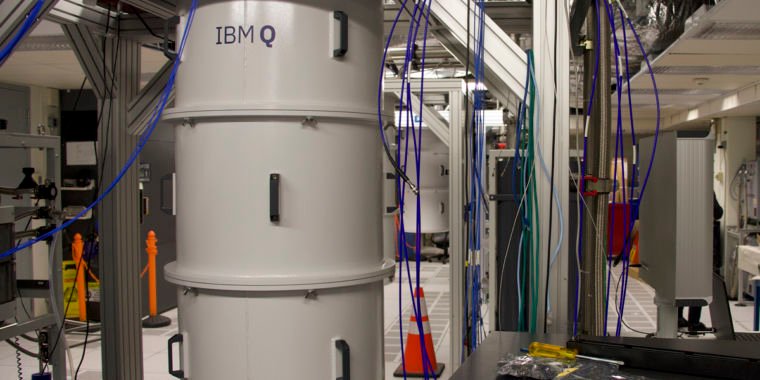 YORKTOWN HEIGHTS, NY – I’m in a room with a possible future for computers. The computer itself is completely unobtrusive and looks like a metal tank hanging from the ceiling. What impresses is the sound, an ordinary metallic ping that dominates the room. It’s the sound of a cooling system designed to take hardware to the very edge of absolute zero. And the hardware being cooled isn’t a standard chip; it’s IBM’s take on quantum computing.

In 2016, IBM made a lot of noise when it invited the public to try out an early iteration of its quantum computer, with just five qubits — far too few qubits to do serious calculations, but more than enough for people to get some real-world experience. programming on the new technology. Amid rapid progress, IBM was installing more tanks in its quantum computing space and adding new processors as soon as they were ready. When the company scaled up the number of qubits to 20, it optimistically announced that 50-qubit hardware was on the way.

During our recent visit to IBM’s Thomas Watson Research Center, the company’s researchers were much more cautious, making it clear that they were making no promises and that 50-qubit hardware is just a stepping stone into the future of quantum computing. But they did claim that IBM was well positioned to be a part of that future, in part because of the ecosystem the company is building around these early efforts.

For its qubits, IBM uses superconducting wires coupled to a resonator, all built on a silicon wafer. The wire and wafer allowed the company to leverage its circuit-building experience, but in this case the wire is a mix of niobium and aluminum, allowing it to become superconducting at extremely low temperatures. Jerry Chow, who showed us around the hardware testing room, says the company is still experimenting with the details to improve its qubits, testing different formulations and geometries individually or in pairs.

The resonator is sensitive to microwave frequencies, allowing each individual qubit to be set or read out using a microwave pulse. Each chip contains optical elements that take external microwave input and route it to individual qubits. There is nothing special about the microwaves themselves, so the input is made with ready-made optics. The only challenge is getting the input to the chip, deep in its liquid-helium-cooled tank. The hardware to do this must not only withstand the extremely cold temperatures, but must also survive being warmed back to room temperature. (Although, once it cools down, the hardware can work indefinitely without replacement.)

Quantum computing relies on entanglement between these qubits. Chow told Ars that to entangle two of these qubits, you can rely on them to have slightly different resonant frequencies. If you address each member of a qubit pair with its partner’s resonant frequency, it is possible to entangle them. Sets of pairs can then be entangled in higher order entangled systems. The qubits remain coherent 100 microseconds at a time, but the entanglement of a qubit pair can be done in about 10 nanoseconds. Chow said the entanglement of a chip currently takes a few microseconds, allowing plenty of time to prepare the entire system and perform calculations.

If it’s all so simple, why haven’t we already seen the 50-qubit chip?

The problem is that the qubits are extremely sensitive to ambient noise. This could be noise from outside the device (although the metal tank protects the chip from much of that). But it can also come from within: the cooling system, the microwave cabling and the chip components themselves can all interact with the qubits. And any form of interaction is disastrous for calculations.

That means that changing anything about the architecture of the chip, even adding a single qubit, has the potential to change the frequency and type of errors as the chip performs calculations. IBM does extensive modeling to try and mitigate this problem before making a chip, but to some extent it’s an empirical and iterative process: use a chip and see what happens. “By building more qubits, we can identify sources of noise and crosstalk,” Chow says.

That was echoed by Sarah Sheldon, one of the scientists working on the microwave systems that control and read the qubits. “We have good tools to characterize individual components, but we don’t have an efficient way to characterize entire devices,” Sheldon said. “As a system grows, we are faced with situations where checking one qubit can cause errors elsewhere.” She later added, “We’re approaching the limit where you can’t simulate these devices classically — how do you know it’s working properly?”