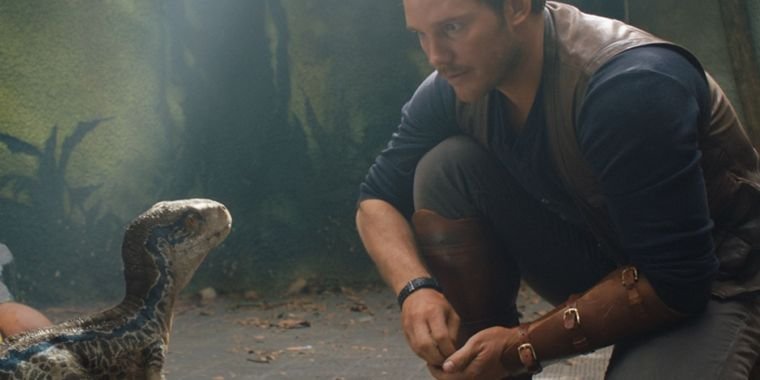 The trailer for Jurassic World: Fallen Kingdom is here, and it looks ridiculous and self-important at the same time. This trailer is the public’s first look at the film – very little information about the plot and few images were revealed before.

The gist of the storyline seems to be that Bryce Dallas Howard’s Claire Dearing and Chris Pratt’s Owen Grady team up to get back to Isla Nublar years after the park has closed, because the dinosaurs will all die if the island “explodes”. The duo set out to save the animals, in particular Blue, a now-grown velociraptor whom Grady raised when he was a baby. The trailer seems to indicate that there are other human forces at play, gathering the dinosaurs for presumably another purpose, but it’s hard to know for sure.

Much of the trailer tells only two set pieces – one in which a tyrannosaurus rex intervenes while Grady is threatened by another dinosaur, and one in which all the dinosaurs seem to flee from an island about to explode – although they appear to be come close. Key moments from the latter are shown, so avoid the trailer if you don’t want that scene spoiled for you. Other highlights include Jeff Goldblum’s Ian Malcolm speaking at some hearing about what to do with the dinosaurs, some sexual history and tension between the film’s protagonists, and plenty of tense dinosaur confrontations with lava raining down from the sky.

The trailer asks a lot of questions, but most of them are pretty silly. Why is the island going to explode? Is it volcanic? If so, how did they know it was going to happen so long in advance? Who collects the dinosaurs in cages? Does Malcolm speak out against what the protagonists are doing as they try to save the dinosaurs from extinction? Is that cliffside scene with the exploding island the highlight? If not, where will the film go?

Shooting took place in both Hawaii and the UK, so it’s likely that the film will catch on The Lost World: Jurassic Park and ends with dinosaurs on the mainland. Whatever happens, it looks like it’s going to be pretty over the top.

The movie looks downright wacky – to the audience, that craziness could be a possible answer to Grady’s question in the trailer, “What could go wrong?” We’ll find out the rest of the answer to that question when the movie comes out on June 22, 2018.