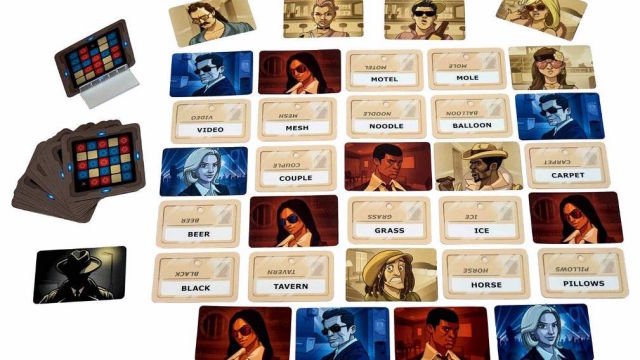 Big success board game Codenames has won numerous awards and prizes since its launch in 2015 for its ease of play, surprising depth and family friendliness. The game revolves around giant word packs, meaning a simple “add some more words” offshoot or expansion was inevitable, but the game’s first official follow-up wasted no time erasing the phrase “family-friendly” from the list with recommendations.

Code names: Deep Undercover began appearing in Target stores in late July, and this week it finally officially launched at more Targets (and will remain an exclusive with the U.S. big-box chain for now) for $20. The 200-card set differs in only one major aspect of the core game: dirty words. Players split into two teams, each led by a ‘spymaster’ who must help his or her teammates figure out which face-up words on a table belong to their team – and do so with one-word clues, which makes the process of giving directions quite tricky.

The game works as a standalone set or as a pack of words to be mixed into the original version. Which way makes more sense? Well, the game’s primary challenge revolves around word cards that have so much in common that they require specific, focused directions from a team’s spymaster to push other players to pick the right cards on the table. Mixing boring words like “Canada” and “paper” with loaded words like “grope” and “crack” makes the job of giving directions easier in some circumstances. However, the new set has enough words with meanings in different scenarios, such as “cherry,” “grandma” (eesh), and “motorboat,” to bolster the game’s default word set in some way.

If you would like to add new, matching cards to your current one Codenames set or want to convince more casual, drunk friends to try the game, this is your best option at the moment. Ars developer Forrest Marvez recently took a look at the game and said it was fun enough. “It’s dirtier Codenames that makes you scream horrible things,” he says.

If you’re looking for a bigger change to the game’s formula, you might want to check out a bigger one Codenames variant preparation for release: Codenames: Images. As you might expect, this standalone twist works almost identically to the word-based version, only the board will be populated with images – many of which will have multiple elements and meanings, further complicating the spymaster hinting process. will make it more complicated.

That game will first be formally released at this weekend’s Gen Con board game expo in Indianapolis, where our in-house staffers Nate Anderson and Aaron Zimmerman will be on hand to potentially pick up a copy (and enjoy countless other saliva-inducing game- preview). That says publisher CGE Codenames: Images will see a wider release starting in September.