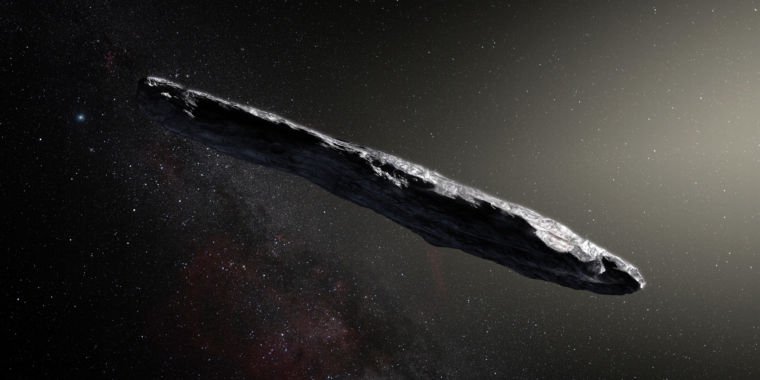 Since mid-October, the astronomical community has been buzzing about what could be our solar system’s first confirmed interstellar visitor. An automated telescope spotted an object that appeared to have fallen on the solar system from above, an angle suggesting it came from elsewhere. Now a team of astronomers has hurriedly released a paper describing the object’s strange properties and naming it “1I/2017 U1 ‘Oumuamua.” In Hawaiian, ‘Oumuamua roughly means “first messenger,” and the 1I indicates that this is the first interstellar object.

‘Oumuamua was first spotted on Oct. 19 by the Pan-STARRS1 automated telescope system. Pan-STARRS1 appeared to have captured images of the object the day before, but the automated analysis software had failed to identify it. Further images over the next few days allowed researchers to fine-tune its journey through our solar system, confirming that ‘Oumuamua made the most extreme approach toward the inner solar system of any object we’ve ever seen. Essentially, it appeared as if it had fallen on the solar system from above, between the sun and Mercury’s orbit. It also went very fast.

The solar system is formed from a flattened disk of material, and all the planets orbit approximately in the plane of that disk. Smaller objects, such as dwarf planets and comets, can approach a little more erratically with orbits tilted out of that plane, but they’re still roughly aligned with them. We had literally never seen anything like ‘Oumuamua.

Comets tend to have the most extreme orbits, but imaging revealed that ‘Oumuamua, despite its close approach to the sun, did not release any dust or particles as it warmed. Within the limits of our detection, there was 10 million times less matter than you would expect from a comet. So ‘Oumuamua appears to be more of an asteroid. The reddish hue is typical of objects with a lot of organic chemicals on their surface.

Further hints about its composition come from its odd shape and rotation. Over a period of 7.3 hours, the amount of light ‘Oumuamua reflects changes by a factor of more than 2.5. Either parts of the surface differ radically in the amount of light it reflects, or the object has an elongated shape. The authors suggest it is cigar-shaped (technically a “three-axis ellipsoid”), with two of its axes about 80 meters wide and the third about 800 meters. If so, it should be fairly sturdy to withstand the stress of its rapid rotation.

The paper’s authors can’t rule out that ‘Oumuamua started at the outer edges of our solar system, but was thrown in at an odd angle by interactions with an unknown planet. But this would require the existence of a fairly large planet at a great distance from the sun, so they consider that unlikely.

In addition, models of the formation of the solar system suggest that large planets can hurl massive amounts of small objects into interstellar space, so it’s not surprising that we’ve finally seen one. One oddity here, however, is that ‘Oumuamua is nothing like any known solar system objects. In addition, we would expect most of the objects flung out to be comet-like, which ‘Oumuamua clearly isn’t. So while it’s dangerous to get too much out of a single example, it’s somewhat surprising how different from our expectations this visitor is.

While there is a recently formed exosolar system roughly in the direction that ‘Oumuamua came from, it was not at that location when ‘Oumuamua would have ejected onto its current path. So we don’t really know where it comes from.

Its close approach to the sun has curved ‘Oumuamua into a slightly parabolic orbit. After falling below the plane of the solar system, the object shot back above the plane somewhere between the orbits of Earth and Mars. It is now rapidly moving away from all of our telescopes and will disappear from view quite soon.

But researchers expect we’ll get other visitors from outside our solar system. ‘Oumuamua was discovered shortly after Pan-STARRS1 had a software upgrade in its analysis pipeline that was intended to identify more objects that would otherwise be rejected as false signals. If ‘Oumuamua is any indication that the software worked, then we may have more discoveries sooner rather than later.