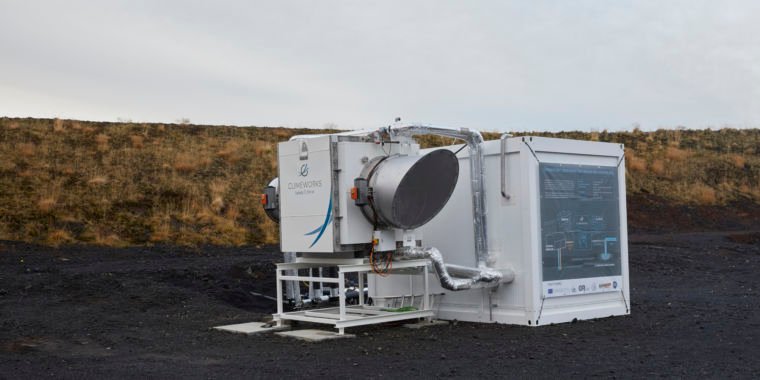 Speaking at a press conference on Wednesday, Edda Aradóttir of Reykjavik Energy described the company’s new project as “the CO2 troll to stone.” If deployed on a large scale, the underlying technology could make a big difference in mapping a better climate future by capturing CO2 gas and trapping it underground before it can contribute to the growing greenhouse effect.

Last year, the people behind the project, which is called “CarbFix,” published a paper outlining the remarkable success they’d had during the pilot operation. CO2 collected from a geothermal power plant (the hot geothermal water comes with some volcanic CO2 also) was injected back into the Icelandic basalt, where it reacted with the rock and turned into carbonate minerals. This is the ultimate fate for CO2 injected underground everywhere, but it usually takes hundreds to thousands of years. In the basalt, the CO2 was mineralized within a few years, making this a particularly attractive way to deal with the CO2 troll.

Meanwhile, a young company in Switzerland called Climeworks opened its first plant to capture CO2– not from relatively concentrated smoke discharge water, but from ambient air. CO2 is much more diluted in the ambient air and currently contains about 0.04 percent of atmospheric gas. So economic capture is much more difficult. For that reason, efforts to develop this specific technology have been slow to start.

In the case of Climeworks’ first plant, the captured CO2 is sold to a nearby greenhouse. But on Wednesday, the company announced it had flipped the switch on a smaller facility connected to the CarbFix project in Iceland. So in addition to the CO2 captured from the Reykjavik Energy geothermal power plant, CO2 sucked in from the atmosphere is now sent down into the basalt for permanent stone storage – a first.

The amount of CO2 being captured isn’t a huge deal, so it’s more about proving the concept than making a significant dent in the global problem. The Climeworks design is modular and consists of fans that move the ambient air through carbon filters. The amine chemicals in these filters release the CO2 when heated. This heating step is nicely facilitated by hot water from the geothermal energy plant.

Climeworks’ Swiss factory consists of a series of 18 fan units, which together can capture approximately 900 tonnes of CO2 per year, which is about what 55 average Americans emit. The company has installed one of these units (so only about 50 tons per year) in Iceland as a test. However, Climeworks has ambitious goals for the future. Co-founder Jan Wurzbacher explained that in 2019 the company hopes to build a larger plant capable of capturing thousands of tons of CO2 every year at the CarbFix facility in Iceland. And the ambitious goal for 2025 is for Climeworks installations to capture one percent of global emissions (that would be close to 350 million tons).

Every step in that direction by Climeworks or any of the other companies working on similar technology — even if it’s a small one — moves us a little bit closer to being able to remove meaningful amounts of climate-changing carbon dioxide from the atmosphere. And that becomes increasingly necessary the longer it takes us to eliminate greenhouse gas emissions.