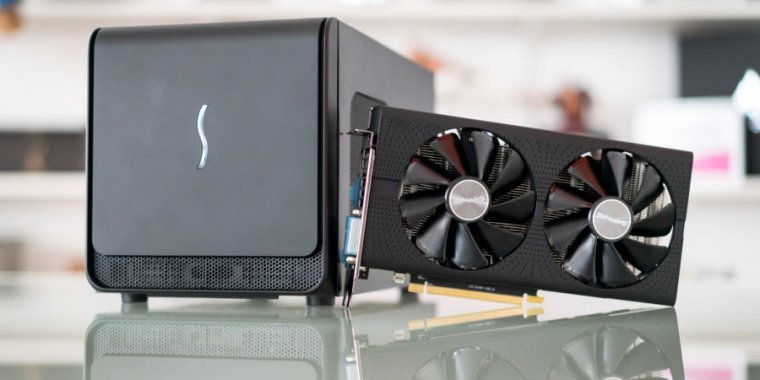 The external graphics card (or eGFX), long the dream of gamers who adore laptops around the world, has finally come of age. Thanks to Thunderbolt 3, which offers up to 40 Gbps of bandwidth, the equivalent of four PCIe 3.0 lanes, consumers can finally access enough bandwidth in a universal standard to make eGFX a viable option.

So the theory goes that you can now take most laptops with a Thunderbolt 3 port, plug in a box with a power supply and your GPU of choice, and enjoy better visuals and higher frame rates in games and faster rendering in workloads. You can even punch a PCIe video capture card or production-ready audio interface into that external box, if you’d like.

So far, price has been the limiting factor aside from some potential bottlenecks in performance and driver support. As beautifully designed as it is, the Razer Core costs a whopping £500/$500 without a graphics card — and that’s if it’s even in stock. Meanwhile, the Asus ROG XG Station 2 – which certainly isn’t beautifully designed – costs £400/$400. Paired with a decent graphics card like an Nvidia GTX 1070 or an AMD RX 580, a full eGFX setup costs just £900/ $900, not including the price of a laptop to pair it with.

Fortunately, there is now another option. Sonnet, a US-based company that makes all kinds of Thunderbolt expansion chassis for PC and Mac, has released the eGFX Breakaway Box, a compact Thunderbolt 3 dock for PCIe graphics cards that costs just $300 (UK price TBC). While it’s admittedly not the most attractive device (at least understated compared to the ROG XG Station 2), the eGFX Breakaway Box is perfectly functional, pairing a 350W SFX power supply with an eight-pin (6+2) and a six – pin PCIe power connector for use with a graphics card TDP up to 300W.

So theoretically you can put a Titan Xp or Vega FE in the Breakaway Box and enjoy l33t-level gaming on a laptop. The reality, however, is more complex. Sonnet’s Breakaway Box, coupled with some slick driver support from AMD, means it’s very possible indeed to turn a thin and light ultrabook into a mean gaming machine capable of playing games like mischief and Rise of the Tomb Raider at high settings and good frame rates. For those not interested in a separate desktop or a larger gaming laptop, an eGFX is a good solution.

But there are limits to what can be done over Thunderbolt 3, with efficiency decreasing as you send more GPU power over the cable. That’s not to say that, in a world where a GTX 1050 Ti or GTX 1060 fits into a slim laptop, the eGFX isn’t as attractive as it once was.

Wait, why do I want one of those?

Still, there are reasons to be excited, not least that the eGFX finally works without the need for complex driver settings (on Windows 10 at least), and can be hot-swapped without crashing your system. This is far from the early days of eGFX when AMD launched the XGH external graphics standard, which essentially took the pins out of the PCIe slot and passed them to an external connector (a solution used by Alienware for its own graphics amplifier). Other connectivity standards at the time didn’t have the bandwidth to support a graphics card, yet few laptop manufacturers implemented XGH. Fujitsu Siemens’ Graphics Booster is one of the rare commercial examples.

Later, others launched graphics cards tied to ExpressCard slots, which offered only a single row of PCIe bandwidth. Others came up with wacky solutions that used internal mini-PCIe slots with carefully placed cables. Neither offered close to the kind of bandwidth needed to properly drive a graphics card, nor any official driver support from AMD and Nvidia.

That changed with the launch of Apple and Intel’s Thunderbolt standard, which provided support for external PCIe devices. The first version of Thunderbolt in 2011 only supported up to 10 Gbps of bandwidth, which was not enough for external GPUs. The arrival in 2013 of Thunderbolt 2, which doubled the available bandwidth to 20 Gbps, led to the start of viable external graphics solutions. And finally, with Thunderbolt 3 from 2015, which uses the same connector as USB 3.1 and offers full compatibility with the USB standard, the PC industry seems to be well on board with eGFX.

After the launch of the Razer Core, one of the first commercially available docks, AMD added support for eGFX through the XConnect driver, which allows users to add and remove external graphics cards without restarting the computer each time. Nvidia is less vocal about supporting external graphics, but they do indeed work fine through the Optimus driver, which has long been used to switch between discrete GPUs and integrated GPUs on Intel laptops. Both AMD and Nvidia list applications currently using the eGFX, while also providing an option to close those applications and safely remove the dock.

While the driver side of eGFX has been simplified, the hardware side is still complex. Not all manufacturers implement full X4 PCIe speed on their Thunderbolt 3 ports, but fall back to X2. Even if they do, there’s no guarantee that the laptop’s BIOS will allow eGFX to be plugged in. Sonnet has a list of compatible laptops on its website, although it doesn’t seem to be updated that often. For example, the Dell Precision 7520 I used works fine with eGFXs after a BIOS update, but is not listed on the Sonnet website.

The uses for eGFX are broader than just games, although of course that’s what most consumers are interested in. You can take a thin and light laptop like HP’s Specter, plug in a graphics dock with an AMD RX 560 in it, and play mischief at over 100FPS on the internal 1080p display with no issues. Or, as used by numerous VFX production houses in London’s Soho, you can plug in one of Red’s ridiculously expensive (at a cost of £7,000) Rocket-X accelerator cards for smooth scrubbing of 6K footage in Adobe Premier.

Video capture cards like Blackmagic’s Intensity Pro 4K, which only use an X4 interface, also work well, as do high-end audio interfaces like the £6000 Avid Pro Tools HD Native+. For the mostly Mac-based music production industry, external PCIe boxes have been the only way to add essential hardware to Macs since Apple launched the Trash Mac Pro.