The E in E. coli now stands for electronics | Techilink 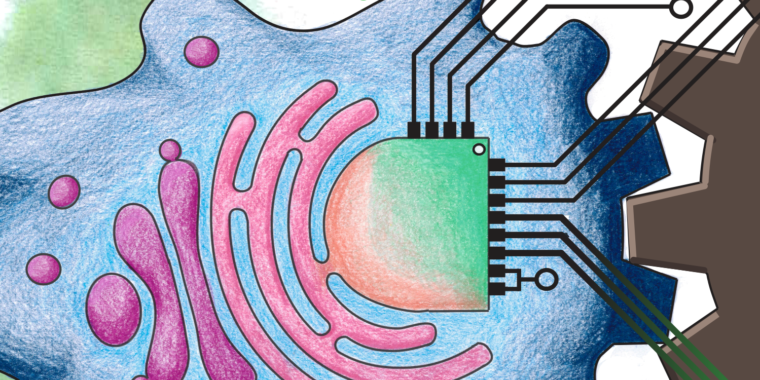 Synthetic biology – our attempt to engineer living organisms – has put a lot of effort into creating genetic circuits that mimic what we do in silicon. Logic gates, amplifiers and more are all implemented using DNA and proteins. While these feats of genetic engineering were impressive, it wasn’t always clear how we would use these genetic circuits. It’s easy to imagine that a logic gate in a bacteria would be useful for various biotech applications, but there haven’t been many opportunities when someone used one.

An exception to this was reported in this week’s edition Nature Biotechnology. A team at Duke University has developed a bacterial population that uses engineered genetic circuitry to express a protein only at specific locations. The researchers then pressed these bacteria onto a surface and processed them to coat the protein in gold. The result is a small gold dome that makes a great pressure sensor.

The circuit itself is interesting in itself. Part of it is pretty simple: a gene codes for a protein that links back to the gene itself and causes it to be active. So once this gene is activated, it will remain activated unless something else happens.

However, the same protein also activates a second set of genes. One produces a small chemical that can diffuse between bacteria and transmit a signal between them. The second gene codes for a protein that binds this chemical signal. When the protein and signal are together, they can activate other genes. Now, three genes away from where we started, the researchers engineered one that responded to the chemical signal by producing a protein that destroyed the first one.

Overall, this creates a giant negative feedback loop – if the first gene is active, it should cause the protein it makes to be destroyed, turning the gene off again. But there’s a twist to it, thanks to the chemical that’s in the middle of the loop. If only a single cell makes the chemical, it will diffuse away and the loop will not complete. Instead, you need neighboring cells that also produce it so that the chemical reaches levels where it leads to gene activation. This makes the entire loop sensitive to whether there are enough other manipulated cells nearby.

However, when the full loop is active, one of the genes that is turned on codes for a protein that forms a structure outside the bacterium. Thus, the production of the structure becomes sensitive to the number of engineered cells around it.

That all seems complicated, but the researchers were just getting started. To allow the bacteria to create a structure in the desired pattern, they used an inkjet printer to create a pattern of bacteria on a membrane. That membrane was then placed on top of a source of nutrients, which allowed the bacteria to grow into colonies. The size and shape of the colonies can be controlled by using membranes with different pore sizes that allow different amounts of nutrients to pass through. (All colonies grew into round, button-like shapes, but the precise height and width depended on the membrane.)

Looking at these colonies, the researchers found that the structure created by their engineered bacteria was mostly on the periphery. Very little was made on the inside of the colony, presumably because the chemical was present in high enough quantities to knock out the entire system. The result was a small dome-like structure that sat on top of the membrane.

To turn this into electronics, the team obtained some antibodies against the protein that formed the dome and linked them to gold nanoparticles. After immobilizing the proteins, the researchers allowed the antibodies to stick to the dome, transforming it into a gold-rich surface.

To turn this into hardware, they made two identical diaphragms and placed them opposite each other, kept apart by a flexible gasket. When pressure was applied to the membranes, the gold domes made contact, creating a circuit. Thus, the presence of current would indicate that pressure had been sensed. The amount of current increased as the pressure increased and as more of the gold came into contact as the domes were pressed together.

The researchers further showed that by controlling the flow of nutrients as the bacteria grew, they could create hardware with different sensitivity to pressure. Connecting them in series also made it possible to create a bacterial “trackpad”, which could sense where fingers were pushed against the surface.

Overall, the system seems full of potential. Since the bacteria can be printed in lines and other shapes, there is no reason to limit the structures made in this way to domes. And we can link anything to antibodies, so we can think way beyond metals when it comes to the kinds of things we build with bacteria.

The only real question is whether this technology offers any advantage over traditional manufacturing techniques, which can typically knock out thousands of custom parts in the time it takes for bacteria to undergo a few cell divisions. The real advantage this system seems to have is that it can mix traditional materials with some of the complicated chemistry that is hard to do anywhere but in a biological system. Figuring out how to use that capability is left to the reader for now.