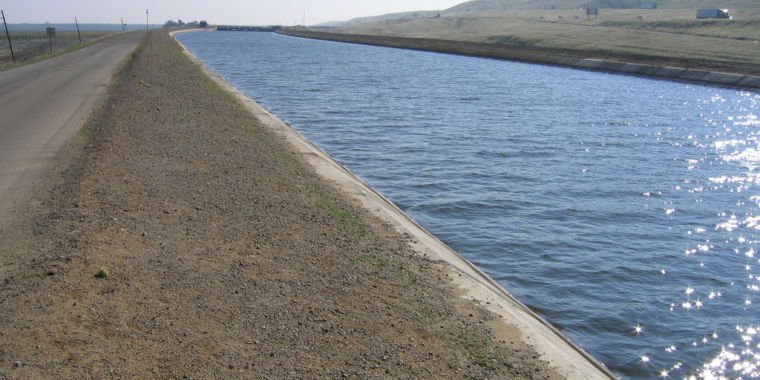 While Northern California’s Oroville Dam flirts with disaster due to excessive rainfall, the water story in the Golden State in recent years has been much more about lack than surplus. The unfortunate double consequence was that the recent drought not only took its toll on California’s water resources, but also damaged water infrastructure. Groundwater depletion gave the earth a sinking sensation that accelerated damage to California’s aqueduct, which carries water to 25 million people and a million acres of farmland.

California’s San Joaquin Valley is (unfortunately) famous for a history of groundwater depletion that has caused the land’s surface to drop in elevation. This subsidence is due to the fact that the water in the sediment beneath our feet actually supports some of the weight of everything above. Removing that water from the small spaces between grains of material allows the sediment to compact more tightly, creating subsidence at the surface. The effect isn’t subtle in California – some places have sunk more than 30 feet over the years.

In recent years, incredibly accurate satellite measurements have been used to map subsidence in detail, highlighting fast-falling hot spots and changes along the length of the California Aqueduct.

A new report released last week by researchers at NASA’s Jet Propulsion Laboratory updates the map with measurements from May 2015 to September 2016. In just 16 months, surface elevations in the San Joaquin Valley fell by as much as 56 centimeters (22 inches). ), with a significant area sinking by at least 20 centimeters (eight inches).

Between 2013 and 2016, the California Aqueduct experienced as much as 64 centimeters (25 in) of subsidence, with nearly five miles (8 km) of the aqueduct sinking by more than 25 centimeters (10 in).

This is critical because the flow of water through the aqueduct is based on a constant, gradual slope. According to the California Department of Water Resources, the location with the greatest subsidence has created a kind of bottleneck for flow in the aqueduct, limiting the aqueduct to only 80 percent of its designed capacity.

A portion of the canal parallel to the aqueduct, called the Eastside Bypass, also passes through a focal point that has subsided significantly since it was first constructed. The Eastside Bypass is intended to divert San Joaquin Valley floodwaters from the Sierra Nevada. Extensive repairs were made in 2000 to combat subsidence, but the Department of Water Resources estimates that an additional $250 million would be required to return it to its original capacity.

Aside from highlighting locations where repairs may be needed, this subsidence monitoring informs the state’s efforts to curb the worst groundwater dehydration it’s causing. But when a drought hits, farmers could be forced to rely even more on groundwater, further threatening the infrastructure that supplies all the surface water available. In the press release from the Department of Water Resources, Director William Croyle didn’t mince words: “Drawing up groundwater is endangering the very system that brings water to the San Joaquin Valley. The situation is unsustainable.”