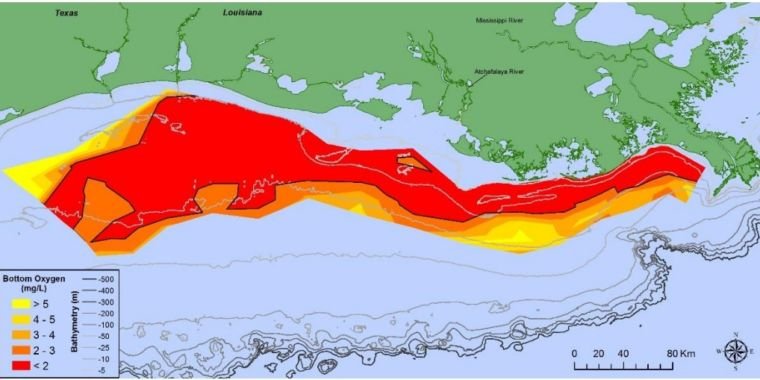 For the past three decades, researchers have sailed the northern Gulf of Mexico every summer in July to study the extent of hypoxia, or low oxygen levels. This summer, they found the largest area ever recorded: 22,720 square miles, about the size of New Jersey.

This year’s “dead zone,” where oxygen levels are so low as to threaten fish and other small aquatic life, is about 50 percent larger than normal. The average size of the dead zone over the past 31 years has been 14,037 square kilometers, according to Nancy Rabalais, a researcher at Louisiana State University who has long studied the problem. The dead zone was probably even bigger than what the scientists found, but there wasn’t enough time on board the ship to measure its full size.

Based on the hypoxia report released this week, this year’s large dead zone was primarily caused by high nitrogen loads from the Mississippi River, due to heavy fertilizer use in the Midwestern United States. Conditions were particularly extreme in some locations. “A striking feature of this year’s low oxygen distribution is the largely continuous band of extremely low oxygen concentrations along the coast at the coastal edge of the zone,” the report states. “Values ​​there were very often less than 0.5 milligrams per liter and almost 0 milligrams per liter.”

The definition of hypoxia is 2 milligrams of dissolved oxygen per liter or less. Heavy river currents cause this problem when excess nutrients in the water cause large algal blooms, which work in tandem with plankton to create more food for fish, which are then consumed by other marine life. However, when the flowers get too big, they use up all the oxygen in the water, causing a low oxygen level. This can kill fish that cannot swim away.

This is what happens every summer in the northern Gulf of Mexico. Yearly measurements of the size of the hypoxic region have allowed scientists to find a direct causal relationship between the dead zone and Mississippi River flows. And now other researchers have begun to document the economic effect of hypoxia on Gulf fisheries, such as higher shrimp prices when dead zones reach their maximum size.