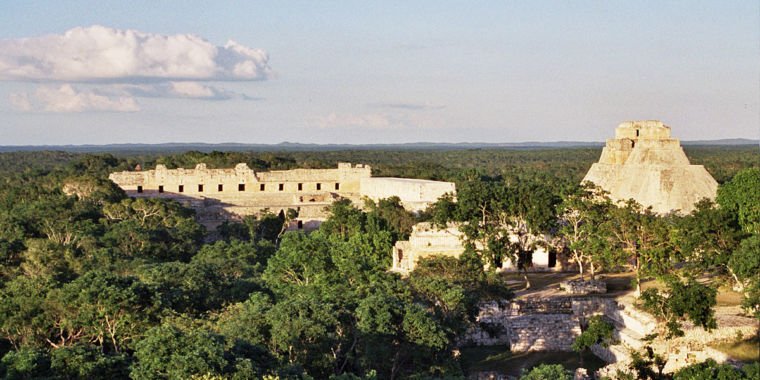 Soils, especially those in tropical forests, play an important role in absorbing and keeping carbon out of the atmosphere; the world’s soil currently contains about twice as much carbon as the air. Tropical forests account for about a third of the carbon that is sequestered in the soil worldwide, and a significant portion of that carbon is underground, buried 20 to 30 cm deep, where it usually spends thousands of years before returning to the Earth. atmosphere.

Deforestation leads to soil erosion and can alter the chemistry that keeps carbon molecules bound to other minerals in the soil. A new study suggests that humans have been damaging carbon reservoirs in tropical forests for much longer than we thought.

The Maya began farming in the lowlands of northern Central America about 4,000 years ago. About 2,500 years ago, civilization was at its peak, clearing the jungle to make way for farms and cities. The Mayan civilization began to decline shortly before the Spanish conquest caused a final, massive population crash 500 years ago. Today, the jungle has reclaimed most of the land once farmed by the Maya, and many of their cities are now hidden under dense foliage. But the bottom turns out to have a much longer memory.

“If you go to this area today, a lot of it looks like dense, old-growth rainforest,” McGill University geochemist Peter Douglas said in a statement. “But if you look at carbon storage in the soil, it seems that the ecosystem has fundamentally changed and never returned to its original state.”

How long does carbon stay buried?

Douglas and his colleagues took sediment core samples from three lakes: Lake Chichancanab in the Yucatan Peninsula and Lake Salpeten and Lake Itzan in northern Guatemala. These were once fed by areas that drained Mayan farmland and settlements. The layers of sediment that washed into the lakes over several thousand years helped the researchers reconstruct a timeline of how carbon retention in the region’s soils had changed over time. In particular, that work relied on molecules called plant waxes: long-carbon-chain alkanoic acids formed in the cuticles of plant leaves.

Plant waxes are a good representative of how long carbon stays in deep soils, according to Douglas and his colleagues. The waxes are usually among the oldest molecules that wash into lakes from surrounding landscapes, according to radiocarbon dating in previous studies, and the molecules tend to bind to minerals in the soil, which is one of the main mechanisms to trap carbon in the deep soil. to hold on .

“So we’re really looking at an indicator of how long the oldest carbon is stored in the soil and then assuming it’s representative of changes in average carbon storage times,” Douglas told Ars Technica. “More work is needed to validate this assumption, but based on available data, it seems reasonable.”

Douglas and his colleagues compared the carbon age of the plant waxes in each layer of sediment with the age of tiny plant fossils washed into the lake at the same time. The plant fossils, they reasoned, were likely formed around the same time the soil washed into the lake, while the plant waxes would represent the carbon molecules already stored in the soil. So the difference between the two would tell the scientists how long the lowland soil retained stored carbon.

The researchers started with strata dating to 7,000 years ago — at least 3,000 years before agriculture, or even settled village life, emerged in the Maya Lowlands. At the time, the undisturbed tropical forest floor contained stores of carbon that had been sequestered from the atmosphere for about 1,500 to 1,760 years. But about 3,500 years ago, that started to change.

The transit time for plant waxes in Maya Lowland soils began to decrease about 3,500 years ago, during what Maya historians call the Preclassic period. Around this time, archaeological records and ancient pollen in lake sediments show that the ancient Maya had begun growing crops in the region and clearing swathes of forest to make way for their fields. At the Salpeten and Itzan lakes in northern Guatemala, carbon sinks seemed to recover somewhat between 2,400 and 1,700 years ago; it is no coincidence that this period of Mayan history was marked by a population decline and the abandonment of many of the great cities of the time.

As Mayan populations recovered at the beginning of what scholars call the Classic period, agriculture and urbanization returned with more vigor than ever. Carbon transit times in Salpetes declined and continued to decline until the eve of the Spanish conquest, about 500 years ago.

After the Spanish conquest, slavery and waves of epidemic disease devastated the Maya population. The forest eventually moved in to reclaim both farmland and cities, and the soil began to recover from centuries of erosion and chemical change, albeit very slowly. Carbon transit times have still not returned to pre-Mayan levels at any of the three sites in the study, despite centuries of forest growth and relative soil stability. Douglas and his colleagues estimated that Maya deforestation reduced the storage time of carbon in the soil by 70 to 90 percent.

“I think these findings support the hypothesis that human societies influenced the global carbon cycle long before the industrial revolution, which some have called the ‘early Anthropocene’ hypothesis,” Douglas told Ars. “We see here that for thousands of years humans exerted a strong influence on carbon reservoirs in the soil; if this is found in other places, it would probably mean a major disruption to the carbon cycle.”

Carbon offsetting may not be as easy as we think

And that can affect the decisions we make today. Over the past century and a half, a new wave of deforestation has threatened the tropical forests of Central America, their delicate and diverse ecosystems, and the vital carbon sinks they protect. Douglas and his colleagues compare it to the early stages of Mayan land clearing, 3,500 to 2,500 years ago.

Planting new trees is a popular form of carbon offsetting: an attempt by a company or country to offset some of its carbon footprint by doing things to help reduce the amount of carbon released into the atmosphere. But if it turns out that forest regrowth alone doesn’t restore the soil’s ability to hold carbon for thousands of years, then reforestation may not be as big of a carbon offset as we think. That’s something to keep in mind when designing offset programs, Douglas suggests.

“To really fix carbon in the soil, you want to make sure it stays there for a long time. This work suggests that this is not always the case with reforestation in the tropics,” he said. “This work cannot be directly applied to designing or evaluating offsets, but it does imply that tropical reforestation does not necessarily lead to the long-term sequestration of carbon, which would be ideal.”