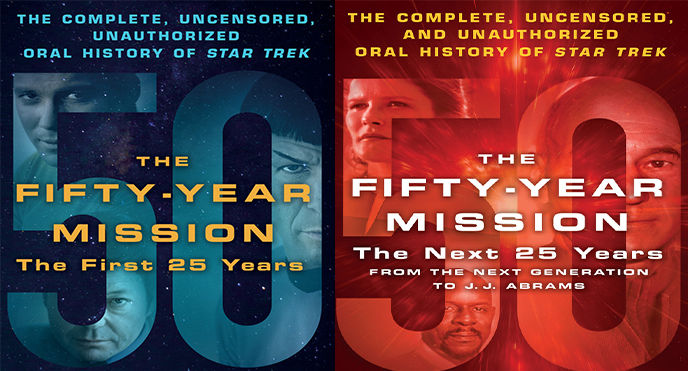 The Star Trek franchise created such a fully realized world that many of us feel like we’ve actually traveled to the 23rd and 24th centuries. But building that world was a messy, weird process. If you want to know what the creators really thought when they wrote your favorite TV show or movie, there’s a new two-part set of books full of inside secrets. Some are inspiring, some are just plain depressing.

The Fifty Year Mission: The Complete, Uncensored, Unauthorized Oral History of Star Trek (UK), edited by Mark Altman and Edward Gross, is exactly what it sounds like. It’s the oral history of the franchise, from its first shine in 1964 to Star Trek on in 2016. The two volumes, clocking in at over 1,700 pages, are overcrowded and prone to clutter and repetition, but they also contain some fascinatingly honest assessments of Trek’s history by the people who were there.

Learn about the various failed attempts to bring the original series back to the 1970s, including the infamous movie called The God thing. But probably the most fascinating part of the first part is the account of the chaos behind the scenes of Star Trek: The Movie, which went into production with no completed script, as Gene Roddenberry continued to try to take control away from the film’s actual writer. (And Spock wasn’t in the movie until very late in the process, because it was originally written as a pilot for a new, Spock-less TV show.)

We also get some fascinating stories from the actors. Alexander Siddig El Fadil explains how he decided to explore Dr. Bashir with Andrew Robinson’s Garak op Deep Space Nine, rather than the flirtation with Terry Farrell’s Jadzia Dax that the writers had been trying to achieve. Then there were absurd fights over whether Avery Brooks, who played Sisko, could shave his head and grow his goatee.

The section about Traveler is where it gets really intense. Apparently no one wanted to make another Star Trek show so quickly, but Paramount insisted – something similar happened Company. And Kate Mulgrew, who played Traveler‘s Captain Janeway, was so offended that they added the sexy Seven of Nine to her show that she tortured actor Jeri Ryan (who was dating showrunner Brannon Braga at the time) for years.)

In the about section Company, the last TV show to air to date, the main theme is creative exhaustion. Braga and Trek supremo Rick Berman wanted to do something different from the other Star Treks, but inevitably fell into the same old patterns, especially after Paramount shot down their more ambitious plans.

There are also exhaustive sections on all the Star Trek movies, including a post-mortem on the failure of Star Trek vand much soul searching Revolt. Even Into darkness is singled out for contempt, but not by anyone directly involved with the film. Bryan Fuller (showrunner for the 2017 series Star Trek: Discovery) comes in to explain all the ways the movie went wrong.

The two parts are not divided chronologically, but in The original series and its sequels, and then everything else. There’s quite a bit of jumping in time as we learn all about 1991’s The undiscovered landand then jump back to 1986 for the creation of Star Trek: TNG. Similarly, we treat the end of Deep Space Nine before jumping back to launch Traveler.

But with one part about the Shatner/Nimoy era and one part left TNG and beyond, actually creates an interesting dynamic. Volume I is all about Star Trek as the underdog: the first series, set in the 1960s, lives under the specter of the gun constantly (sorry) as it narrowly escapes cancellation time and time again. Even the most successful TOS movies are controversial. After the expensive first film failed to win hearts, the other five films with the original crew were made cheaply, with constant penny pinching and a sense that the series had an expiration date. (Especially afterwards Star Trek va sixth film was by no means guaranteed.)

And then Volume II is mostly about Star Trek being a juggernaut, like TNG becomes an instant hit show despite creative struggles. The franchise that barely made it through the first 20 years becomes a phenomenon, spawning a whopping 624 episodes of television. This is going to be a story of overheating as one hit show spawns three spin-offs and four movies. The cracks are starting to appear as Revolt falls flat and Traveler crashes while trying to be a copy of TNG. And then a final TNG movie, Nemesisinadvertently makes the argument for Star Trek to take a long nap, an argument that Company strengthens.

So the two parts offer an interesting contrast: Star Trek ascends from 1960s obscurity to 1980s movie popularity; and Star Trek declined from dominance in the late 1980s to obsolescence in the early 2000s.

Along the way there are two constants: ego and idealism. Many of the most painful parts of The 50-year mission involves finding out that your creative heroes can be total assholes, capable of anything from sexual harassment to deliberate sabotage. Each era of Star Trek saw struggles for creative control largely motivated by egomania and the kind of self-importance that would make the divine Q blush. And yet, at the same time, almost everyone who worked on Star Trek believed, to some degree, in the vision of a brighter future where people overcome selfishness and hatred, and some of the most fascinating parts are people tying themselves together and making up stories. about more evolved humans.

The 50-year mission is probably not for the casual reader. It’s just too crowded, and you get the sense that the editors included every stray comment they heard, including some from people who weren’t even there. But there are two groups of people who will find these two parts irresistible: Star Trek junkies who want to get to know the dirt inside, and aspiring television writers and critics who want a unique look into the inner workings of one of the greatest series of all time. times. .