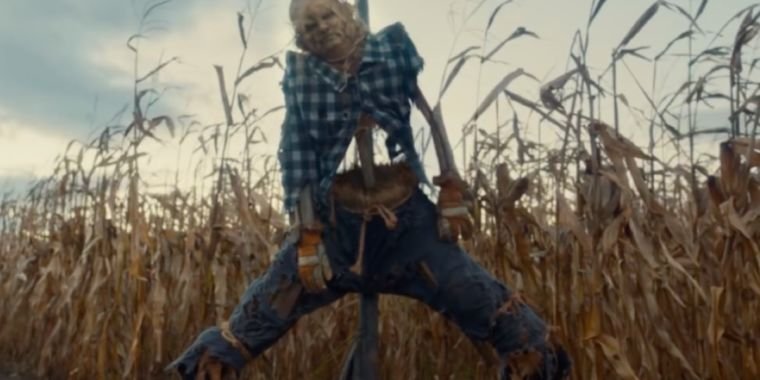 Monstrous creatures from terrifying stories come to life for a group of teenagers in Scary stories to tell in the dark, the new horror film produced by Guillermo del Toro. The film is based on a series of 1980s children’s books by the late amateur folklorist Alvin Schwartz (he died in 1992), who drew on common folklore and popular urban legends for his anthologies.

Technically, Schwartz was a curator, collecting scary stories from all over and preserving oral traditions on the page. Remember that classic campfire song, The worms crawl in the worms crawl out / the worms play pinochle on your snout† So did Schwartz. You’ll also find variations of the killer with a hook for a hand that hunts couples clinging to parked cars. So is the unfortunate babysitter who discovers the call is coming from in the Housealong with a host of other terrifying dishes. It all comes in a light-hearted, conversational format, complete with tips on how to most effectively read the stories aloud to scare your friends. (The Documentary of 2018 scary stories delves more into Schwartz’s source material.)

While the books are technically aimed at children, the material can be quite dark, which is why the series is often listed as one of the most challenging books by the American Library Association. People (particularly parents) have objected to the violence in the Scary Stories series – and illustrator Stephen Gammell’s disturbingly surreal imagery only adds to the potential nightmares. Publisher Harper Collins even released a new 30th anniversary edition in 2011 that didn’t feature Gammell’s original illustrations, causing a stir among longtime fans.

Children absolutely love these books, precisely because they are scary.

What those objecting adults don’t seem to understand is that kids love these books precisely because they’re scary. As Laura Miller noted in Slate, “What future regulators want … is not to protect children from books that could harm them, but to protect themselves from the knowledge that many children seek out and enjoy the macabre,” and adds, “If you’re claiming your right to purposely scare yourself (even if it gives you nightmares), you’re making a bid for self-determination.”

In short, the books are perfect fodder for del Toro, whose visually distinctive work often centered on fairy tales and fantasy (The Labyrinth of Pan), classic horror (Crimson Peak, mom), samples (Hellboy, the shape of water), and such. He signed with CBS Films in 2016 to develop and produce a feature film adapted from Schwartz’ Scary Stories series, eventually tapping André Øvredal (Troll Hunter) lead.

But Scary Stories is also a challenging series to adapt for the silver screen. Del Toro said his adaptation is not your standard anthology film. “Anthology movies are always as bad as the worst story in them — they’re never as good as the best story,” he said during a panel at San Diego Comic-Con in July. “I remembered in The Labyrinth of PanI made a book called The Book of Crossroads† I thought it would be great if we had a book that you read, write what you fear most. Then the theme became the stories we tell each other.”

The first trailer appeared in March and revealed that several stories from the books are embedded in a wider story that combines a classic haunted house mythology with a historical murder mystery. The film is set in the small American town of Mill Valley on Halloween 1968. High school nerd and aspiring writer Stella Nicholls (Zoe Colletti) and her friends Auggie (Gabriel Rush) and Chuck (Austin Zajur) hatch a plan to kill head bully Tommy in a ambush Milner (Austin Abrams) and his gang in revenge for the torments of Halloween’s past. They run into Ramón (Michael Garza) while on the run from Team Tommy, and the four take refuge in the local haunted house: the abandoned Bellows house.

“I thought it would be great if we had a book that you read, and it writes what scares you most.”

As Stella Ramón relates, the Bellows family had a daughter named Sarah who was mysteriously “different”. They kept her locked in a basement room, and her only contact with the outside world was to tell her scary stories through the walls of her room to curious local children who came sniffing around the house. Many of those children have mysteriously disappeared. Sarah eventually hanged herself and the house has been empty ever since.

But Stella and Ramón find the secret room where Sarah lived, along with her storybook, which is said to have been written in the blood of the children she supposedly killed. And a curious Stella takes the book home, awakening Sarah’s vengeful spirit. Anyone who was in Bellows’ house at the time is a target—not just Stella, Ramón, Auggie, and Chuck, but Tommy and Chuck’s older sister, Ruth (Natalie Ganzhorn). One by one, new stories with each of them appear as if by magic in Sarah’s book. Then the stories come alive in the real world, from Harold the Scarecrow and a corpse searching for his missing big toe, to the Jangly Man and the Pale Lady (all fan favorites).

scary stories is rated PG-13, all the better for appealing to the book series’ younger fan base, so it’s not as gruesome as you might find in a typical horror movie. There’s an innocence here, not something you’ll normally find in the genre. The metaphysical musings on the power of stories aside, it’s not a particularly in-depth film, matching the books’ deliberately simple prose. But there are plenty of ominous scenes, classic jump scares, and really gross and/or terrifying moments to delight fans. The only surprising thing is that the studio has released it now instead of holding it for Halloween. I think Schwartz would be pleased with how well the film captures the ghostly campfire spirit of his books.