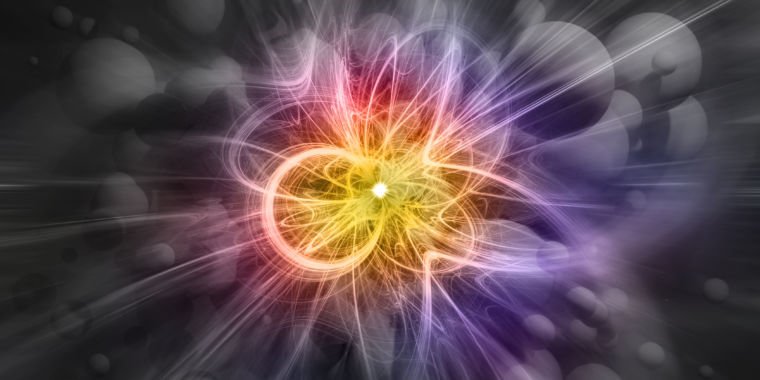 We don’t play with them often, but plasmas are a central part of modern life. However, the plasmas we can create on Earth are different from some of the plasmas thought to exist in space — those in space appear to contain antimatter. Those plasmas are difficult to observe and that’s why we don’t think we understand them very well.

That makes some recent papers on the capture of positrons – the electron’s positively charged cousin – very interesting. While they don’t go as far as examining plasmas with antimatter, they show that we can capture the antimatter long enough to make some of it.

Plasma: a liquid that is not a liquid

Before we get to the good stuff, we need to trudge through some well-explored fields. A plasma is basically a gas, but the gas is made up of ions – atoms with one or more electrons removed – and free electrons.

This mainly concerns the electrons, since an ion is at least 2000 times heavier than an electron. While the electrons fly around like children on a sugar picnic, the ions are a drunken father who falls asleep by the grill.

The slower movement of the ions destabilizes the entire plasma. When all the electrons leave an area, it takes a while for the ions to start following. By the time they start moving, the electrons are back, attracted by their attraction to the positive charge. Then the electrons are gone again, leaving the stunned ions still trying to catch up.

A plasma of equals

At the center of the galaxy, the plasmas appear to be slightly different. Gamma-ray observations show that there is a large amount of positron electron annihilation, indicating that the plasma is made of positive and negative charges of equal mass. We don’t actually know how that kind of plasma behaves, but calculations tell us it’s probably very different from an ion-based plasma.

To make something to study, we need to trap positrons in a magnetic bottle. Then electrons can be added to create an electron positron plasma. It seems simple, but there is a problem: the rarity of positrons. To solve this problem, a group of scientists in Germany has developed a terribly good positron trap.

The researchers arranged a set of electrodes to recreate that electric field. But the electrodes must provide a very precise profile relative to the magnetic field lines of the trap. It’s not in the article, but I suspect a lot of time was spent on this issue. Stellarator designers had a similar problem, so the researchers were probably able to work with a modified version of the code used to optimize the Stellarator (the study was conducted at the same institution).

However, the result was spectacular: the researchers were unable to detect any positron loss during the trapping process.

The fall was also pretty awesome. It combines magnetic fields and electric fields to trap the positrons. This allowed the researchers to take advantage of the new electric field technique to load and unload the trap in a controlled manner.

The trap holds the positrons for about a second, which is quite amazing. But the researchers wanted to know why they only got a second. So a second article was devoted to looking at the positrons once they were in.

The trapped positrons follow a sort of spiral path around the center of the trap. As the particles move, there is a chance that they will be pinged out of the trap by a collision. For example, there are always some neutral atoms floating around, and hitting one throws a positron out of the trap. More importantly, any imperfection in the shape of the electric or magnetic field will also lead to particle loss. Loss through that mechanism would indicate a flaw in the trap’s design.

The researchers were able to investigate the loss of the trap by altering the fields produced by the electrodes that guide and help trap the positrons. They were able to determine that most positrons are lost through collisions with neutral gas atoms. So the trap is as good as it gets.

Next step (I hope): add electrons and learn about positron electron plasmas and the center of our galaxy.