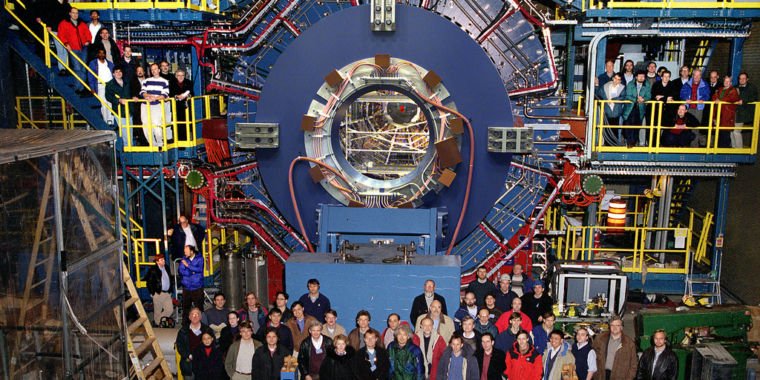 Researchers at Brookhaven National Laboratory’s RHIC particle accelerator have determined that an exotic form of matter produced in their collisions is the fastest spinning material ever detected. The material is called a quark-gluon plasma, and it allows us to study the state all matter was in immediately after the Big Bang.

The fact that the quark-gluon plasma is spinning gives us the opportunity to study some theoretical ideas about the behavior of the strong force, one of the fundamental forces of nature responsible for holding together the matter we see around us.

The force is strong in these collisions

Brookhaven’s Relativistic Heavy Ion Collider (RHIC) and CERN’s Large Hadron Collider are the only facilities capable of reaching energies high enough to produce a quark-gluon plasma. Quarks are the building blocks of the heavier components of atoms; both protons and neutrons are made up of three quarks bundled together. Gluons are the particles that hold them together in that beam. Their interactions are governed by the strong force, and the rules of those interactions are described by a theory called quantum chromodynamics (often referred to simply as QCD).

Those rules prescribe that the only stable combination consists of three quarks. We’ve generated other particles with two, four, and even five quarks, but they all decay quickly.

Collisions with heavy ions – usually gold or lead – bring many protons and neutrons into a small volume with a lot of energy. Under these conditions, the neat boundaries of those particles disintegrate. For a brief moment, quarks and gluons mix freely, creating a quark-gluon plasma. This state of matter has not been observed since some time after the Big Bang and has numerous unusual properties. “It has all kinds of superlatives,” Ohio State physicist Mike Lisa told Ars. “It is the easiest-flowing liquid in nature. It is highly explosive, much more than a supernova. It is hotter than any liquid known in nature.”

While confirmation that the quark-gluon plasma existed was a great achievement, studying it can provide fundamental insights into the basic properties of matter. “The quark-gluon plasma, as fascinating as it is,” Lisa said, “is a tool for understanding quantum chromodynamics, the strong force theory.”

Give it a spin

We can now add one more superlative to the list of quark-gluon plasmas of “mosts”: it may be the fastest spinning fluid known. Much of the material’s study has focused on the results of two heavy ions hitting each other head-on, because that’s what puts most of the energy into the resulting debris, and these collisions spew out most of the particles. But in many collisions, the two ions don’t hit each other head-on — they deliver a more fleeting blow.

Because the two ions are moving in opposite directions at nearly the speed of light, the resulting quark-gluon plasma should inherit a large amount of off-axis force. And that, in turn, should spin the plasma.

But a logical “should” doesn’t always equate to a “does”, so it’s important to confirm that the resulting material actually spins. And that’s a pretty big engineering challenge when you’re talking about a blob of material that’s about the size of an atomic nucleus.

To make their measurements, the Brookhaven researchers relied on what happens when the quark-gluon plasma expands and cools. As it does, its quarks and gluons condense into familiar particles, including protons, neutrons, and various unstable combinations of quarks. These particles all have a spin, and that spin is inherited from every spin of the quark-gluon plasma that produces them.

Of course, those particles emerge from the quark-gluon plasma as a chaotic, energetic jet, so measuring their spins would be a serious challenge. Conveniently, there’s a kind of particle called a “Λ-hyperon,” which is essentially a proton that has had one of its up quarks replaced with a strange quark. The strange quark can decay in a way that converts it into a proton, which can be observed using the Relativistic Heavy Ion Collider’s detector hardware. Conveniently, all protons produced by this process tend to be emitted in the same direction as the spin axis of the Λ hyperon. So by tracking these protons, the team behind Brookhaven’s STAR detector was able to get an idea of ​​the rotation of the quark-gluon plasma.

Measuring that is not only an achievement in itself, it also gives us a new opportunity to study quantum chromodynamics, the rules that hold together most of the matter around us. One way to study this is to see how the rules change when matter undergoes a transition, such as that from protons and neutrons to a quark-gluon plasma.

The spin of the quark-gluon plasma may provide another opportunity to study a transition between different sets of rules of quantum chromodynamics. Under quantum chromodynamics, there would be a fundamental symmetry between left- and right-handed quarks (the handedness relates to the combination of their spin and momentum). But the symmetry is broken when the quarks have mass – which they do.

Since we cannot make a massless quark, there is only one other way to restore symmetry: to raise the quarks to a higher energy. “If the temperature is high enough, parts of space can transform from one configuration of gluon fields to another,” Lisa told Ars. He said many scientists think the energies achieved at the Relativistic Heavy Ion Collider are high enough to investigate the so-called chiral symmetries of quantum chromodynamics.

There are two symmetries. The chiral magnetic symmetry will be accessible if the quark-gluon plasma has a magnetic field — something that it is believed likely has, but has not yet been measured. The other pathway is chiral vortex symmetry, which requires the plasma to rotate. We now know that, provided the collision is not completely head-on, it is. “The transition of a [set of rules] for another, it’s very exotic and exciting – it would tell us something fundamental about QCD,” said Lisa.

And the consequences are great. Not only would it help us better understand quantum chromodynamics, but for a short time the entire universe had energies high enough for this different set of rules to apply. In effect, we are restoring a symmetry that broke the Universe when it emerged from the Big Bang.